The second stop on the NHRA Western Swing tour is seductive. It brings world-class facilities, together with the potential for record-setting performances and near-perfect weather on the outskirts of a destination vacation that everyone in the family can enjoy. A venue this perfect for fans almost makes you forget how hard it is for race teams to run at this level, especially surrounded by competitors looking to outdo them and every turn. Consistency is what all racers crave, and the weather during all three qualifying sessions had such a small delta that crew chiefs and drivers optimized their tunes to go faster with each session.

As fans, we get excited by mineshaft-like conditions that create the potential for record-setting runs, but repeatable temperatures and track conditions mean less volatility  better racing coming into Sunday. As it was, each Pro Stock car was producing nearly 300 hp more than they could at Denver because of the altitude (and oxygen quantity) difference.

Elite Motorsports' Troy Coughlin Jr. and Erica Enders were both running strong in qualifying. Both cars use new engine packages that debuted at Norwalk, while Enders had a slightly more aggressive combination that’s new for Sonoma. This "No Name" engine (as each Elite Motorsports DRCE Pro Stock engine has a name, except this one) seems to have allowed her to put down more power and take the number one qualifying spot.

Elite Motorsports' nemesis Greg Anderson followed a similar pattern at the Denso NHRA Sonoma Nationals to what we saw here last year. In 2021 he qualified in the fourth position on Friday night and then eclipsed that performance in the first session on Saturday to move to the number one spot. This year Anderson qualified ninth and then came back to claim the number two spot on Saturday morning. Unable to improve on that e.t. in the afternoon session, Anderson did see teammates Dallas Glenn and Kyle Koretsky improve to shift the ladder and bring the KB Racing and Elite Motorsports pairs into a more stoichiometric balance.

After three rounds of qualifying it was Enders who claims her 26th number-one qualifier in her Pro Stock career followed by Greg Anderson, Troy Coughlin Jr, Aaron Stanfield, and Dallas Glenn.

A year ago Steve Johnson came into the Denso NHRA Sonoma Nationals a new man with a Monster-headed Suzuki race bike. Having won the 2021 NGK NTK NHRA Four-Wide Nationals in Charlotte (his first win in seven years) he qualified number three in Sonoma. He went out in round two at Sonoma last year but went on to give Angelle Sampey and Matt Smith a run for the 2021 NHRA Camping World Drag Racing Series Championship in Pro Stock Motorcycle.

This year he came to Sonoma leading Sampey and Smith in the points standings and claiming the top qualifying spot. By the second qualifying session, Sampey was able to put together a run that surpassed Johnson and Smith and ensure the points hunt stays top of mind.

Sampey went even quicker in the third session and became even more “number one’er” with a 6.700 at 200.95 mph, earning her the Sonoma Raceway track record and the title of being tied for third quickest run in the history of Pro Stock Motorcycle. Sampey said, “I was not perfect on the run, I was not perfectly straight on the bike. I haven’t seen the data with Andrew yet, but I don’t see us changing anything for tomorrow.”

In the post race interview it was clear that while Sampey has accomplished nearly everything a Pro Stock Motorcycle racer can accomplish, she still feels unworthy of her success. That burden must run deep and while she is aware of it, it still leaks out of her after every accolade she receives.  It was evident when she shared the burden she feels, she told the media gathered, “Andrew Hines stepped off the bike to be my full-time crew chief."  Yet Sampey still has an island of confidence to draw from, and that comes from her self improvement and her competition. "If I can just be better than Eddie," she said,  "I’ll be happy—and I believe that is his goal too.”

Beyond the Vance & Hines shuffling in the top 10, Joey Gladstone made the biggest move of the third session and ran 6.757 at 200.26 mph to claim the third spot. Eddie Krawiec moved around Karen Stoffer in the third session. Angie Smith claimed the top speed of the event and Matt Smith retained fell back from number two to the number four spot on his strong Friday night run. 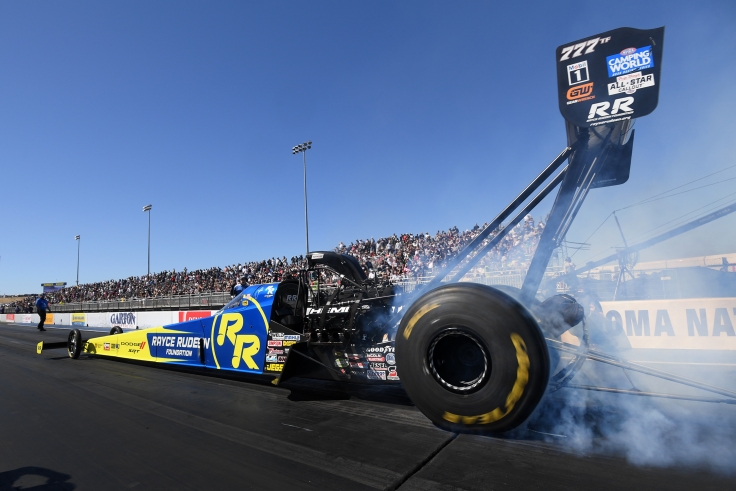 Sonoma’s Friday night Top Fuel qualifying session is always a proving ground. There’s no bigger power increase that these dragsters will see than coming from Sunday in Denver to Friday night in Sonoma. Crew chiefs that  balanced the power and traction to the ragged edge were rewarded with the quickest times, and Neal Strausbaugh and Leah Pruett wagered the best. Their 3.689 at 327.59 mph run was unbeatable in the Saturday sessions where Steve Torrence, Brittany Force and Justin Ashley all took shots and were all able to improve on their numbers— but not surpass Pruett's.

Doug Kalitta’s Alan Johnson-powered effort also proved to broker its power well. The Kalitta-Johnson dream team of car control and horsepower had not, until this race weekend, seemed to have materialized, but perhaps their success and clean runs in qualifying will pave the way for successful rounds on tomorrow’s race day. We all know they are both capable of it, perhaps tomorrow is the time they unleash it. 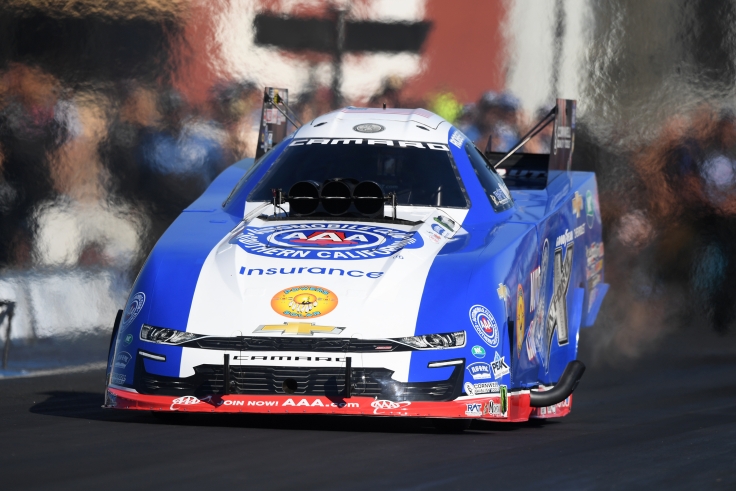 Friday night's qualifying session in Funny Car became a citadel that was impossible for teams to break into during Saturday’s sessions. Robert Hight (3.825 at 332.75),  Ron Capps (3.846 334.48), and Alexis Dejoria (3.867 330.63) locked up and retained their top three positions going into race day.  Bob Tasca III (3.875 at 331.04) was able to displace Blake Alexander for the number four slot and drove Cruz Pedregon down one position as well, but the trajectory was established early and difficult to alter.

Hight’s run in the  Auto Club Chevrolet Camaro gave the Funny Car points leader his third No. 1 qualifier this season and 74th in his career. In addition to his three straight wins at Sonoma, Hight also has five victories in 2022, including two in a row, and he will open eliminations against Jeff Diehl on Sunday.

“There’s a lot on the line, but we just need to take it one round at a time,” Hight said. “You’ve got to try to be perfect and you have to be aggressive out there. To win rounds and come out on top, you’ve got to be on edge, and I’ve got the best guys in the business behind me to get this done. We’re very confident right now because we’ve won the last two races and we qualified No. 1 here, but you have to continue to take it one round at a time because the competition is so good. There’s a lot of good cars right now so to do what we’re doing makes it that much more special.”