Sunday News and Notes from the Pep Boys NHRA Nationals 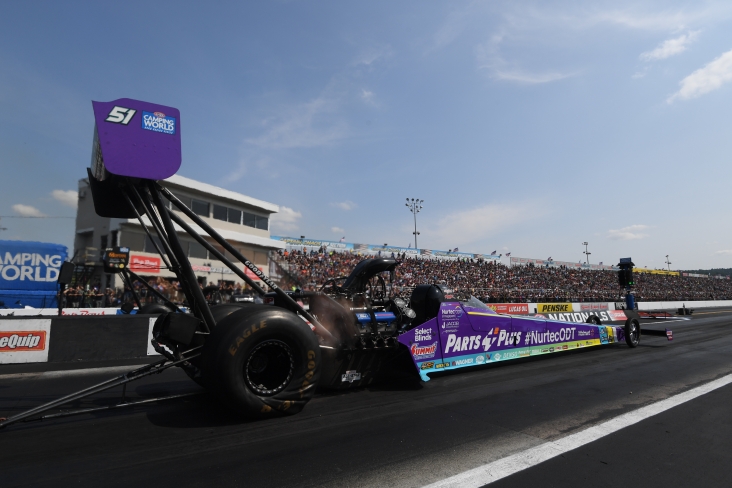 Clay Millican was due for a break - and he got one in a major way to open Top Fuel eliminations on Sunday. Millican struggled mightily on the starting line in his first-round matchup against Tony Schumacher, posting an eye-popping (and not in a good way) .319 reaction time. That put Schumacher considerably ahead, but he ran into trouble and Millican drove around him with a run of 3.776-seconds at 285.11 mph.

It wasn't the exact strategy Millican had in mind when he pulled into the lanes Sunday morning, but he'll take round wins by any means necessary after his string of bad luck as of late. Millican had lost in the first round at the past five races and eight of the last nine, many in razor-thin fashion. He had put together a number of strong runs - many of them that would win against another opponent - but Millican fell from fifth to 11th in points entering the Countdown. 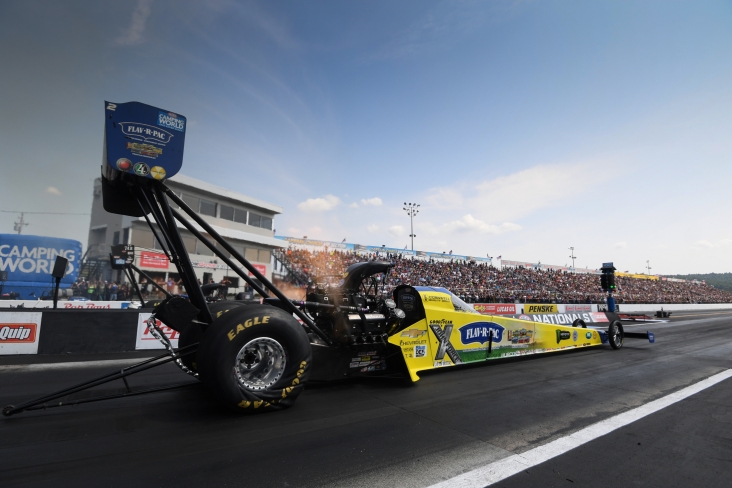 She already had the track speed record, but like she usually does, Brittany Force made sure to top herself to open Sunday eliminations. Force went 3.698 in her opening-round victory against Cam Ferre, but the bigger news was the bottom number that popped up on the scoreboard, as the Top Fuel points leader delivered a massive run of 337.66 mph to obliterate the track speed record by more than two mph.

The capacity crowd delivered a massive round of applause to Force, who will take on Indy winner Antron Brown in the second round. 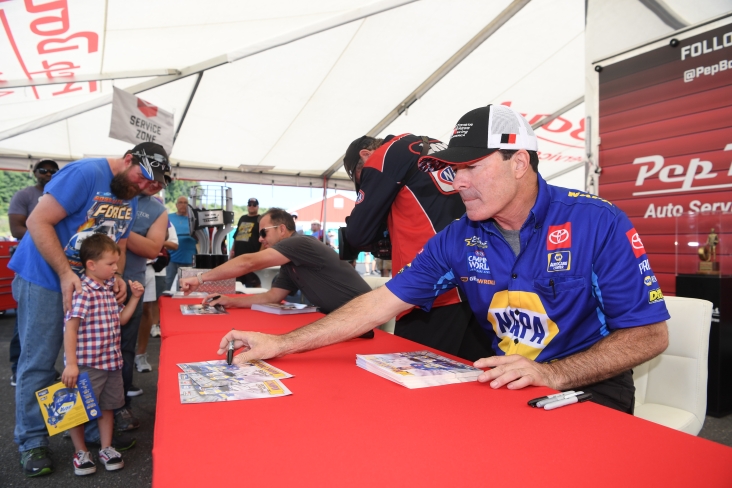 Defending Funny Car world champ Ron Capps opened his title defense officially on Sunday and he didn't disappoint to open the day. Capps, who qualified No. 2, put together the best Funny Car run of the weekend with a blast of 3.858 at 331.53 to move into the second round.

Capps joked on the top end that the car "was moving at warp speed," but it was undoubtedly an incredible run to open eliminations at Maple Grove. Coming off his legacy-making win at the U.S. Nationals, Capps is riding high and will take on Tim Wilkerson in the second round. 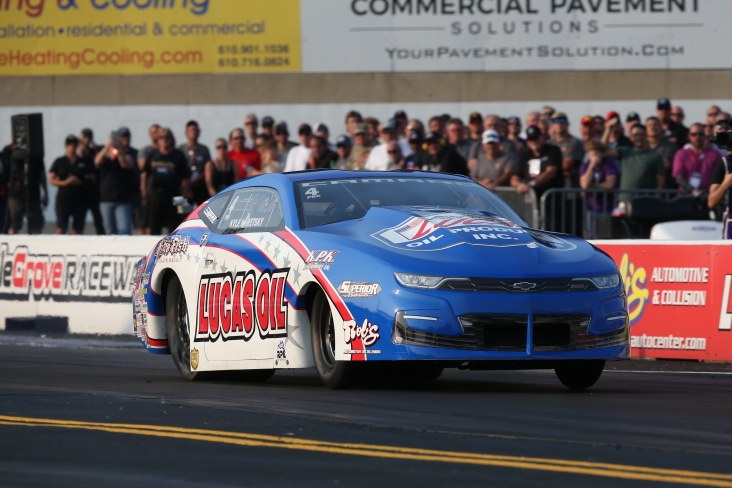 Chalk up a round win to the track owner on Sunday. Getting a great ovation from the overflow crowd at Maple Grove Raceway, Kyle Koretsky put together a strong run against the returning - for one race, anyway - Tanner Gray, getting the win with a pass of 6.567 at 208.94.

Gray, the 2018 Pro Stock world champ, was filling in for Deric Kramer this weekend, but Koretsky had too much in his Lucas Oil Chevrolet Camaro, posting a solid .030 reaction time as well.

Erica Enders continues to lower the boom in Pro Stock dating back to the final qualifying session on Saturday. She made a stellar run in the third session on Saturday and put together an incredible 6.548 at 209.39 to open the first round on Sunday, going far quicker than anyone in the opening round.

"We've got a fast hot rod and my guys have come out swinging," Enders said. "Reading means a lot to us and I'm really looking forward to a long day." 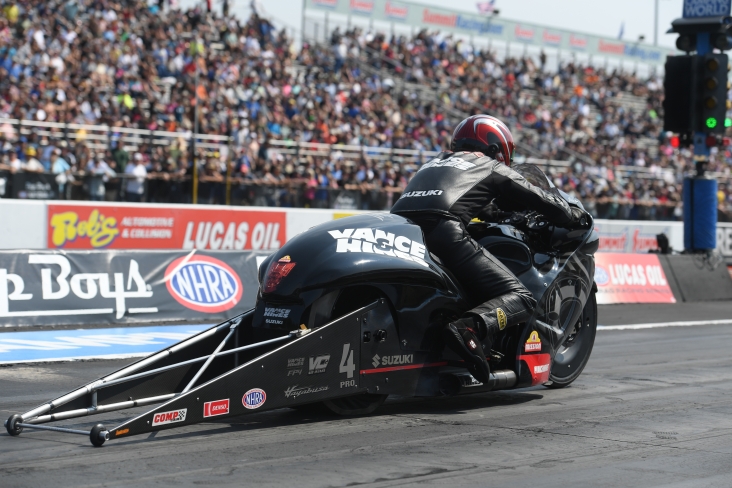 It was a forgettable couple of days in qualifying for Eddie Krawiec, but the five-time winner at Maple Grove Raceway made a swift turnaround when it counted on Sunday. He had the third-quickest run of the first round, delivering a 6.795 at 198.44 to get past Karen Stoffer in the opening round at Maple Grove Raceway.

Krawiec did enough to qualify seventh with a 6.797, making a good enough pass in the final session, but he was in the 13th slot after two qualifying runs. He'll need to be strong to get a sixth win in Reading - and tie teammate Angelle Sampey for the most in the class at the track - as Krawiec will meet Angie Smith in the second round.

A wild second round of Top Fuel started with an epic pedalfest, had a massive explosion, and even included an upset with an early exit from the defending world champion.

Mike Salinas and Clay Millican started the memorable round by engaging in an out-of-this-world pedalfest that ultimately ended with a Salinas victory on a run of 5.868 at 282.42. Both smoked the tires almost immediately and Salinas got in and out of the throttle several times before hooking up right before the finish line. Millican, meanwhile, could never get it completely together to fall in an entertaining pairing.

Salinas will take on Justin Ashley, who went 3.841 at 306.12 in his win against a red-lighting Doug Kalitta.

Antron Brown moved onto the semifinals as well, getting past Brittany Force with his best run of the weekend, going 3.730 at 323.97. Force looked to be on a clean run, but suffered a massive explosion and fire, turning her almost sideways and ending her day.

That will mean a new points leader leaving Reading, and Brown also improved to 4-0 against Force this year during eliminations. He's now after his second straight win and will face off with Austin Prock, who upset four-time defending world champ Steve Torrence with a pass of 3.762 at 326.87.

Prock has struggled mightily in recent weeks and starts the playoffs in 12th, but appears to be getting things together at the perfect time. 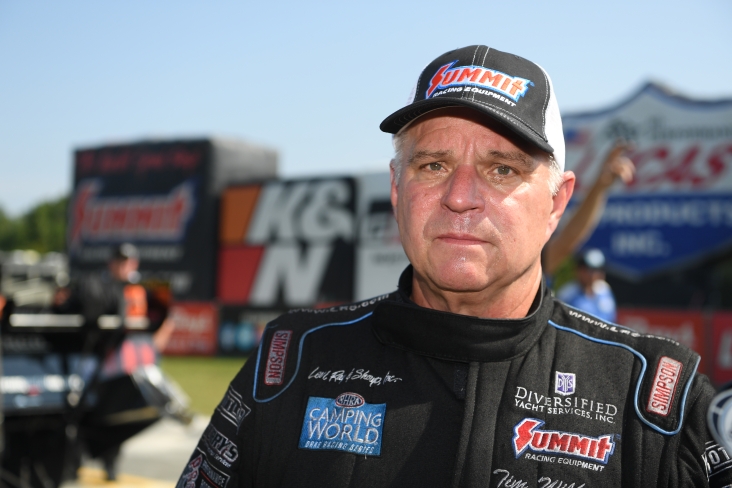 Tim Wilkerson loves playing the spoiler and thrives in the underdog role, and the veteran was in prime form in the second round at Maple Grove Raceway, sending Ron Capps to the trailer earlier than most would have expected.

Capps ran into trouble during his run, while Wilkerson delivered a strong 3.918 at 329.58, which was second only to Robert Hight's 3.901 during the round. That puts Wilkerson in the semifinals against John Force, who is making his 800th start today. The other semifinal will feature Hight and Matt Hagan, who slipped past Bob Tasca III with a 3.935 at 329.67. 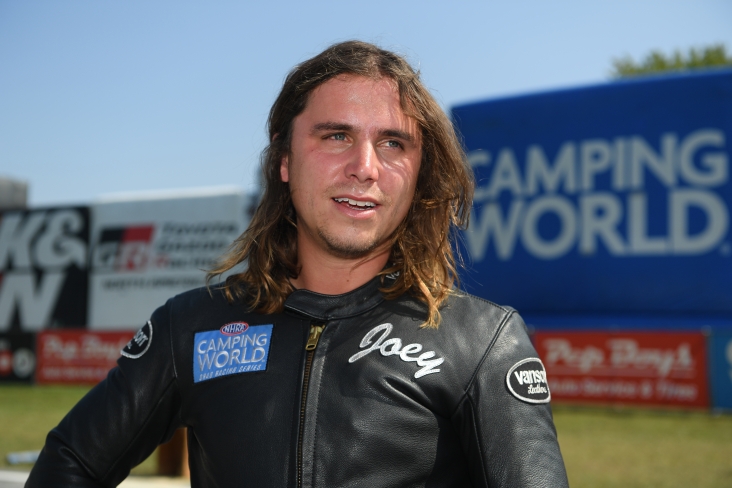 It was holeshot galore in the second round in Pro Stock Motorcycle, as three of the winners advanced on them, while Steve Johnson provided a stellar .001 to advance.

Marc Ingwersen started the starting line success with his victory against Angelle Sampey, going .024 on the starting line. Angie Smith followed that, drilling the tree with a .010 to slip past Eddie Krawiec. The last - and arguably biggest - came when Joey Gladstone went .024 to unseat points leader, defending world champ and No. 1 qualifier Matt Smith.

That momentarily gives Gladstone the points lead heading into his matchup with Ingwersen. Meanwhile, Johnson sent Jerry Savoie packing with a nearly-perfect .001 light to set up his matchup with Angie Smith. 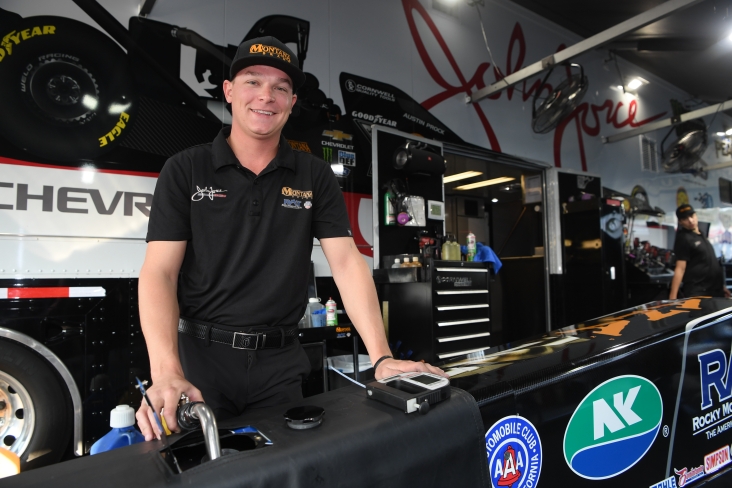 One epic pedalfest apparently wasn't enough on Sunday at Maple Grove Raceway. Another one came in the semifinals between Austin Prock and Antron Brown, with Prock escaping by virtue of his 5.73 at 293.47. Both went up in smoke almost immediately and both tried to fight through it, with Prock doing a fantastic job of driving to get the semifinal win. It's a welcome sight for Prock, who had suffered through five straight first-round losses heading into Maple Grove Raceway.

It will be a rematch of the Lucas Oil Winternationals to open the season, as Prock will face off with Justin Ashley, who went past Mike Salinas with a run of 3.739. Ashley won that race to open the season and will now try to win in Reading to open the playoffs.

Tim Wilkerson is headed to the final round in Funny Car, but it came at a cost.

With John Force going up in smoke almost immediately, Wilkerson won with a 4.621 at 182.62. But the car caught fire late in the fire and became engulfed in flames before the Safety Safari was able to put out the flames. Wilkerson was out of the car quickly and escaped any injury.

Wilkerson will find a way to make the final round, though he was certainly not pleased with what transpired at Maple Grove Raceway.

"It seemed like it dropped five cylinders at once. It did something and we'll do our best to go back and fix it," Wilkerson said. "It's really irritating because we don't do stuff like that."

The Pro Stock final marks a rematch of the Seattle final, where Troy Coughlin Jr. picked up his first career Pro Stock victory. That came against teammate and points leader Erica Enders, who has been downright dominant on Sunday in Reading.

She's been the only driver to make runs in the 6.50s for all three rounds and she'll look to open the Countdown to the Championship with her first victory at Maple Grove Raceway.

In Pro Stock Motorcycle, it will be Angie Smith taking on points leader Joey Gladstone.