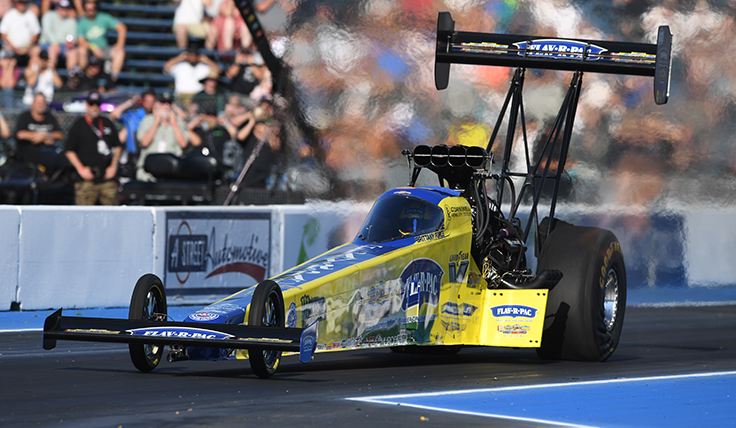 Low qualifier Brittany Force advanced easily over Jim Maroney, putting the event sponsor’s car into the second round with the best run of the weekend and — under the event’s best conditions, a comparatively cool 80 degrees — ran a 3.742 that was better than her 3.753 qualifying pass and her speed of 332.43 mph was a new track speed record, breaking Steve Torrence’s four-year-old mark of 331.61. The track e.t. record is 3.685 set by Antron Brown in 2016. 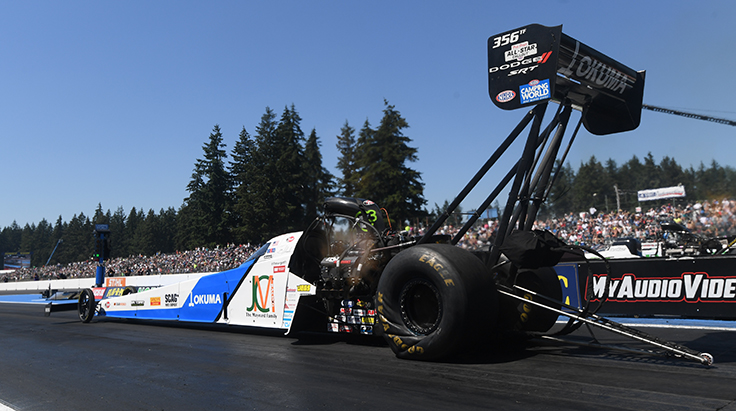 With No. 10 Clay Millican and No. 11 Antron Brown both bowing out in the first two pairs of the first round, 12th-ranked Tony Schumacher has a chance to make up some ground to try to crack his way into the Top 10 and to earn the first win light for the Maynard family, who purchased the operation right after the Sonoma event.

The eight-time world champ did both, defeating Scott Palmer in round one to move into 11th place ahead of Brown. If Schumacher can win the event, he’ll pull to within 10 points of Millican. 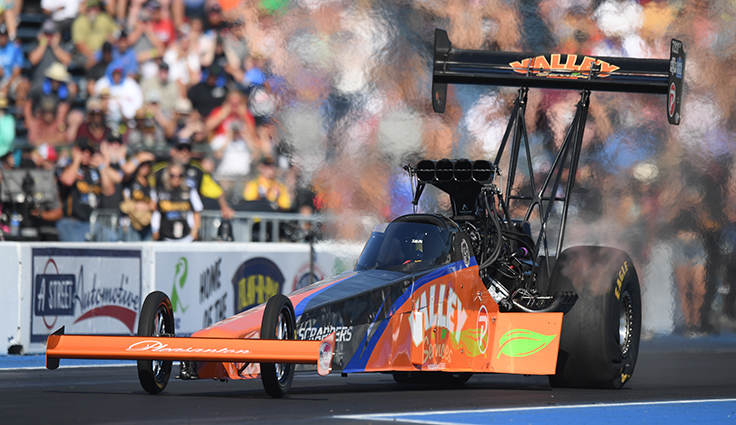 Mike Salinas’ star-crossed weekend — his Valley Services car made it down the track only once in three tried in qualifying — continued in round one as the one-time points leader had driveline issues and couldn’t stage. Trouble first cropped up as the car stopped partway through its post-burnout backup, then the transmission ended up in no man's land between forward and reverse. Shawn Langdon soloed into the second round with a 3.79.

Salinas came into the race just six points behind Brittany Force but now will leave at least 35 points behind, possibly more depending on how far Force can go. 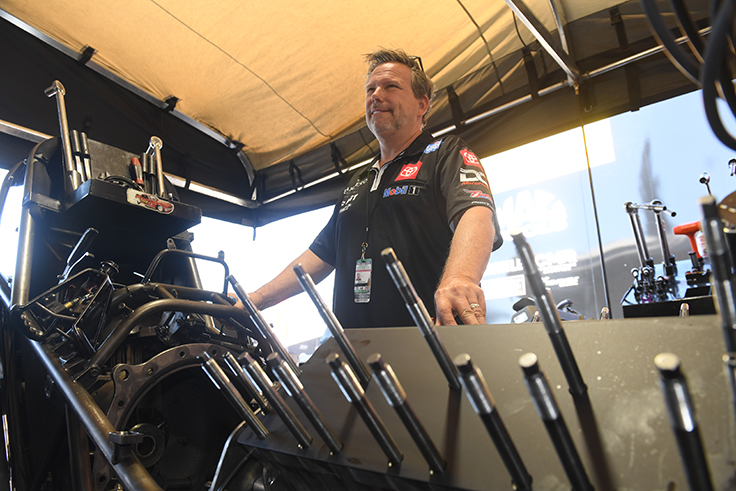 Del Worsham — who won this race in Funny Car in 1999 and in Top Fuel in 2011 — had a tough decision to make for his driver, Alexis DeJoria: Should he take the left lane, a lane that he loves because it’s where he set the still-standing 3.832-second track record as a driver back in 2016 and where DeJoria ran her No. 2-qualifying 3.994 this year, or, after local Top Fuel favorite Ron Smith slimed the track with an oil leak ahead of them in round one of Top Fuel, should he switch to the right?

After watching two Top Fuel cars and a Funny Car successfully navigate the refurbished lane, he put the Bandero Tequila Toyota in the left lane and watched her streak to a 3.964 to beat Jim Campbell.

Hagan did get a bit of good news/bad news as Hight advanced to round two but did it by beating third-place Ron Capps, meaning that Hagan will leave the event still in second place.

Blake Alexander, who sits 12th in points, lost a golden opportunity to work his way in the Countdown Top 10 after seeing 10th-ranked Jim Campbell fall in round one and the absence at the race of No. 11 Chad Green.

Alexander and owner/tuner Jim head did almost everything right, making their best run of the event, a 3.99, but did it alongside J.R. Todd’s 3.96. With a bye run waiting in the semifinals, if he could have beaten Bob Tasca III in round two he would have passed Campbell.

How much did the cool Sunday morning weather affect performance? In Top Fuel qualifying, contested in mid-90-degree weather, only Brittany Force ran in the 3.7-second zone. In round one of Top Fuel, nine 3.7-second runs — including her low e.t. 3.74 — were recorded.

In Funny Car, where only three three-second runs were recorded in qualifying, five of the 12 drivers made a sub-four-second pass, including Robert Hight, whose 3.91 was a half-tenth quicker than Bob Tasca III’s low qualifying 3.96. 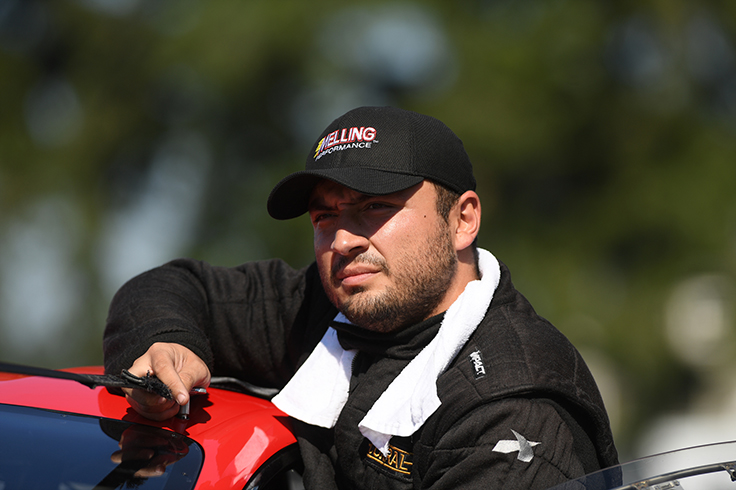 It was a mixed bag for the Cuadra family in round one, where they had races in back-to-back-to-back pairings. First-round losses by 10th-place Bob Butner and 11th-place Deric Kramer opened the door for Fernando Cuadra Jr. to crack the Top 10. Cuadra drove around Butner’s .004-second reaction time to advance, but will have to beat low qualifier Greg Anderson in round two to move into the No. 10 spot.

Cuadra’s brother, Cristian, runner-up earlier this year in Las Vegas, threw away low e.t of the race, a 6.600, with a -.097 red-light against Camrie Caruso. Their father, Fernando Cuadra Sr., gave Troy Coughlin Jr. a scare in the next pair with a tight race that he lost by just .007-second when Coughlin reset low e.t.to 6.598.

The star-crossed weekend of the McGaha family ended in round one, but at least on a positive note. Patriarch Chris couldn’t get his Harlow Sammons Camaro down the track on any of his three passes — 8.03, 7.61, and 17.39 — but made a decent 6.67 pass against Erica Enders’ new-low e.t. pass of 6.593. Mason McGaha, who made it down the track just once in qualifying with a 6.71, picked up nearly a tenth of a second and, thanks to a holeshot, came within just .002-second of upsetting Aaron Stanfield. 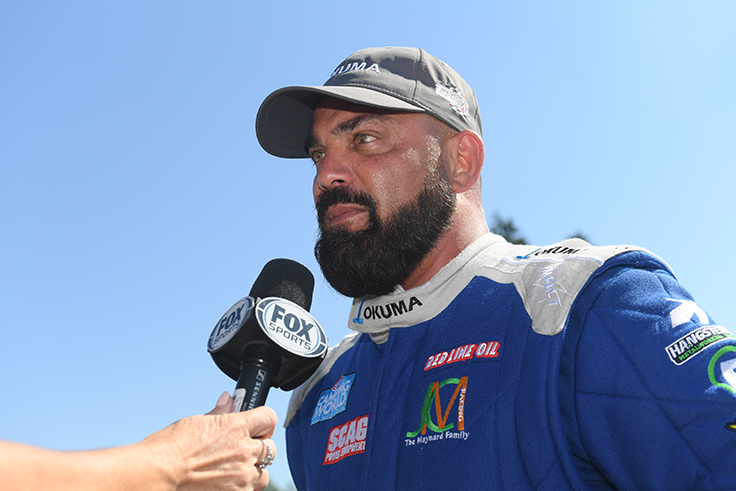 Tony Schumacher, Top Fuel’s all-time wins leader *85 victories), hasn’t won a race since the 2020 Houston event, but is in the semifinals for just the second time this season after beating Shawn Langdon on a holeshot, 3.82 to 3.79.

It’s a welcome turnaround for Schumacher who had lost in the first round five straight times entering this event. 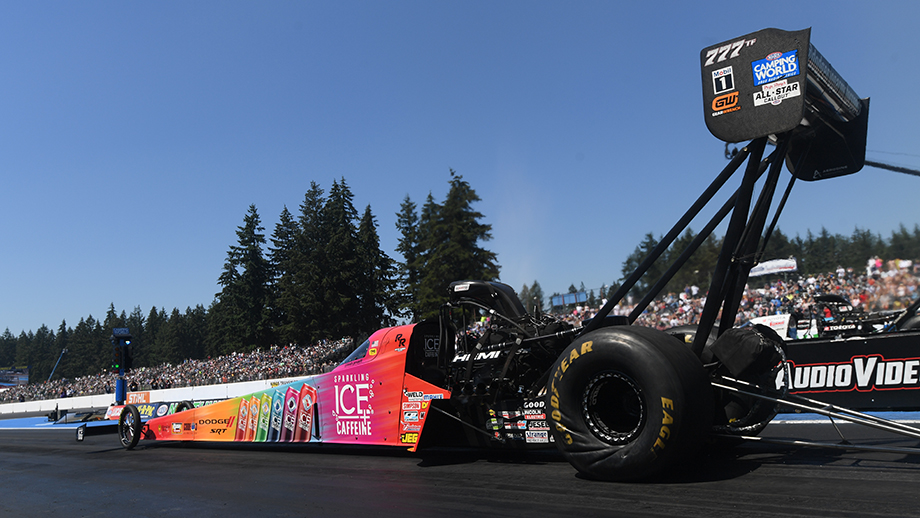 If you can’t sweep the Western Swing – and no one will this year – the next best thing is to go two-for-three, and the two previous winners on the Western Swing – Denver champ Leah Pruett and Sonoma titlist Brittany Force – will square off in the semifinals, where Force will have lane choice based on her superior winning time, 3.79 over Josh Hart to Pruett’s 3.81 over Doug Kalitta. 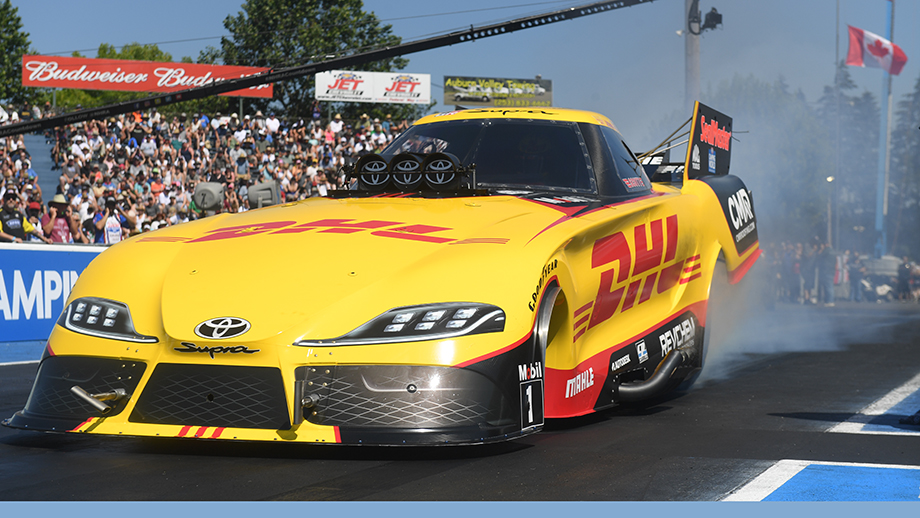 After disappointing exits by his Kalitta Motorsports Top Fuel teammates Doug Kalitta and Shawn Langdon just ahead of him in round two, J.R. Todd will have a chance to salvage the weekend for the team as his second-round victory over tire-smoking low qualifier Bob Tasca III earned him a bye into the final round.

"It's all started to come together for us in Q3 and round one,” said Todd. “Jim [Oberhofer] and Todd [Smith] are just picking away at it. Hopefully, we can make a good test pass on the bye run and see what we have for these JFR cars in the final." 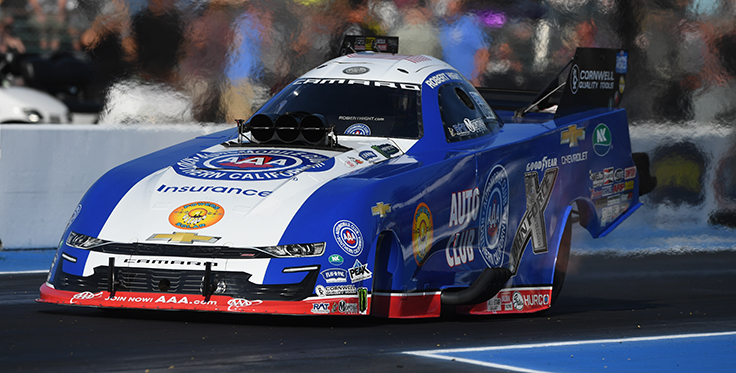 The “JFR cars” that Todd references are points leader Robert Hight and defending event champ John Force, who each won their second-round matches — Hight over Alexis DeJoria and Force over Tim Wilkerson — and both sported mid-3.9-second power, with Hight slightly quicker, 3.960 to 3.965 for lane choice.

The only time Force has beaten Hight in four tries this season was in the final round of the four-wide event in Charlotte. Hight won their most recent clash, in the semifinals of the Mile-High Nationals, which he went on to win. 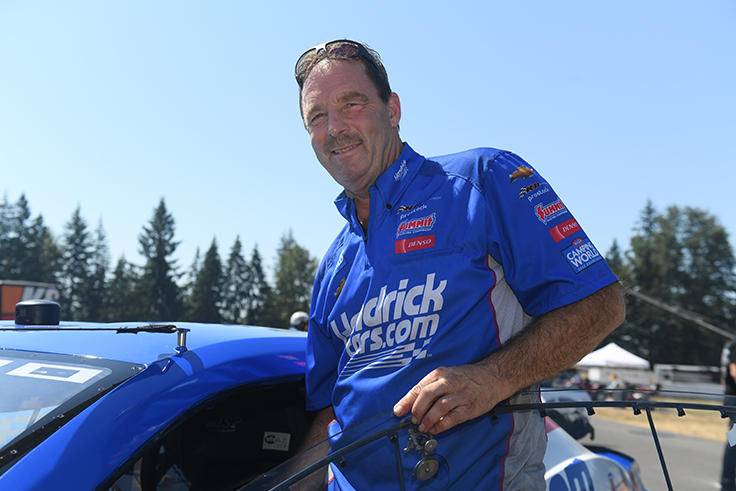 As the temperature starts to warm, its effect on the Pro Stock cars was noticeable as round winners Troy Coughlin Jr. slowed two-hundredths and Aaron Stanfield slowed four-hundredths, but don’t tell that to frontrunners Greg Anderson and Erica Enders, who almost matched their first-round times

Anderson will face Coughlin in the semi’s while Enders will go off against teammate Aaron Stanfield for the seventh time this season, having won six of their previous clashes.

Seattle fans are cheering the efforts of Top Sportsman racer Joe Mellof, who rebounded from a quarterfinal crash in Top Sportsman presented by Vortech Superchargers to reach the final round. Mellof had just beaten Bryan Warr in the semifinals when his car went out of control, crossed the centerline, and impacted the opposite lane guardwall. Fortunately for Mellof, he had a bye in the semifinals and was able to repair damage to his car to advance. 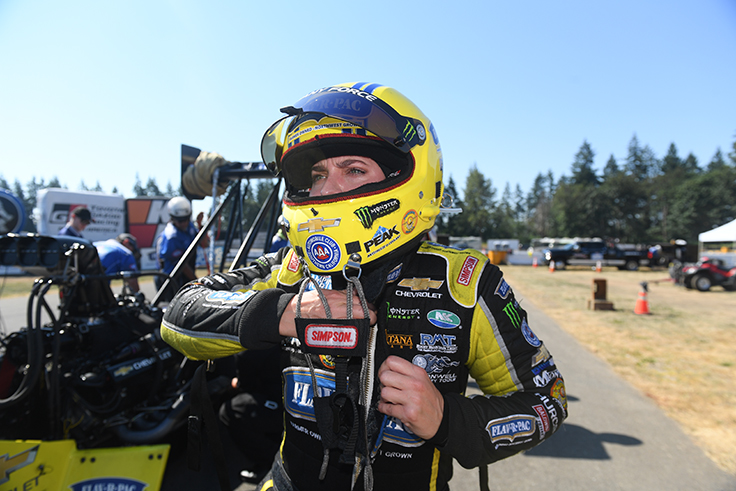 Brittany Force and Leah Pruett squared off side-by-side for the first time this year -- they’d raced at both of the four-wide events – and this one went the same as the four-wides, with Force showing the way to the finish line after Pruett’s Sparkling Ice dragster puffed the tire 300 feet into the run.

Force will have lane choice over Tony Schumacher after a wild battle between the eight-time world champ and Justin Ashley. Both drivers struck the tires early, but Schumacher quickly pedaled and powered on while Ashley’s Phillips Connect dragster slewed around in its lane before ultimately crossing the centerline.

Of Schumacher’s eight round wins this season, three have come against Ashley. 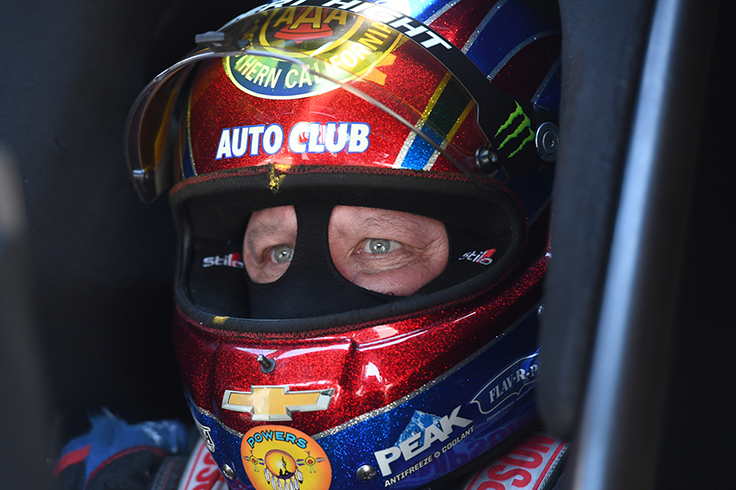 Robert Hight will have final-round lane choice as he tries to win his second race of the three-event Western Swing. The Denver champ defeated the boss, John Fore, with a 3.97 while J.R. Todd ran a solid 3.98 on his bye run in the DHL Toyota. Hight will also hope to double up with Top Fuel teammate Brittany Force, as they did earlier this year in Richmond.

Troy Coughlin Jr. will have a chance to win his first Pro Stock Wally after upsetting low qualifier Greg Anderson, who shook the tires against him. Coughlin, an eight-time winner in NHRA’s Sportsman-racing ranks, has been to three Pro Stock finals but has been turned away each time.

To get it done this time, he’ll only have to beat the points leader and season dominator Erica Enders, who will have lane choice thanks to her 6l64 victory over Aaron Stanfield. Interestingly, Enders’ red Camaro had been lined up in the left lane behind Anderson until he shook the tires, after which they moved to the right lane.