Rising stars from the Summit Racing Jr. Drag Racing League took part in a special eight-car shootout event held during the Circle K NHRA Four Wide Nationals in Charlotte with Matthew Peterson driving his way to a win against Lincoln McMaster in the final round.

The event is the first of seven exhibition races that will be held at Camping World NHRA Series events throughout the country this year.

Peterson, 12, of North Ft. Myers, Fla., came from the No. 3 qualifying position to the final, where he beat McMaster, who fouled at the start.  For Peterson, the win at the Circle K Four Wide Nationals in Charlotte adds to a long list of achievements that already includes back-to-back Division 2 championships in the Intermediate division. Peterson previously won 12 NHRA Wally trophies. Peterson’s road to the final included wins against Bricen Hartmann and Tanner Mocny.

McMaster, 9, of DeLeon Springs, Fla., qualified last in the field but drove a solid race in eliminations with wins against Landon Pruett and Grace Varner. McMaster was the first 5-year-old to earn a Jr. Dragster license at his home track, Gainesville Raceway. 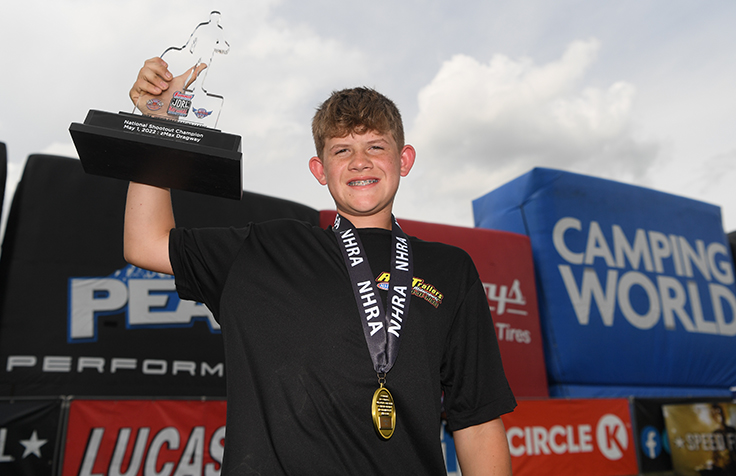