No Top Fuel driver in history has ever had a five-year monopoly on the winner’s circle at a specific event, and Torrence is one of just four drivers — including Joe Amato, Tony Schumacher, and Antron Brown — who have dominated a single event four straight years, but no one has ever done it five times.

Torrence is winless so far this season — in what to the prolific winner is one of the longest droughts of the past few seasons — so the Capco Contractors team’s return to the four-wide Charlotte event is a welcome opportunity to end that skein and make some history in the process. Torrence’s team has dominated at the North Carolina track with six wins over the last eight events, including four straight at the Spring four-wide event and two victories at the Fall Carolina Nationals -- only Funny Car’s Robert Hight has enjoyed as much success at zMAX, but four of his six wins have come in the fall race – giving the team confidence heading into the event. 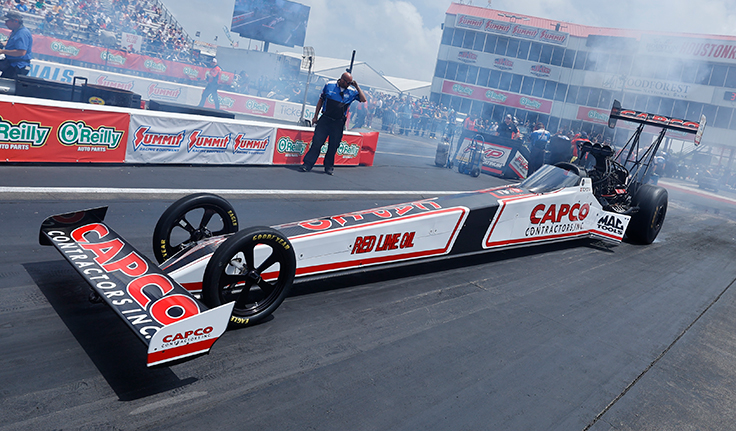 Although he hasn’t reached the winner’s circle in 2022, Torrence has been to at least the semifinals at four of the five events and was runner-up at the Four-Wide Nationals in Las Vegas. Last weekend in Houston he qualified No. 1 and reached the semifinals before dropping cylinders — and the round — to Justin Ashley, all with a new progressive tune-up that Richard Hogan and Bobby Lagana Jr. have brought to the championship team.

“It a hard pill to swallow when you're used to going out and going to the final round often,” Torrence admitted. “When you're used to winning races a lot, and you go five races and people think that you fell off and you're not the car you once were and you're not this or not, but we didn't just forget what we were doing. You have to sacrifice; you gotta say, ‘I'm gonna have to give up now to be better later,’ and that's where we're at. And I think that things are slowly coming in that direction. I think last weekend was a glimmer.

“We had that dominant race car for the last four or five years, and we haven't had to adjust, and when you have that much valuable information that you can, look back on and adjust and make decisions and tune the race car for, you have a plethora of information. At this point, we're probably 30 laps into doing something completely different, and everything we've done before is negated, so you don't have that backlog, that inventory of stuff to build on. And so we're kind of building as we go.

“Plus, it’s definitely more competitive than it’s ever been in Top Fuel,” Torrence added, “but that’s what makes it fun.  It’s all about the competition. The longer you’re on top, the harder it is to stay there and that’s our challenge this year: to stay on top.”