Looking for ways to learn more about the history of the sport you love so much? Here are four new books covering a good chunk of drag racing history that would go nicely on your bookshelf or make a fine holiday present.
18 Nov 2022
Phil Burgess, NHRA National Dragster Editor
DRAGSTER Insider 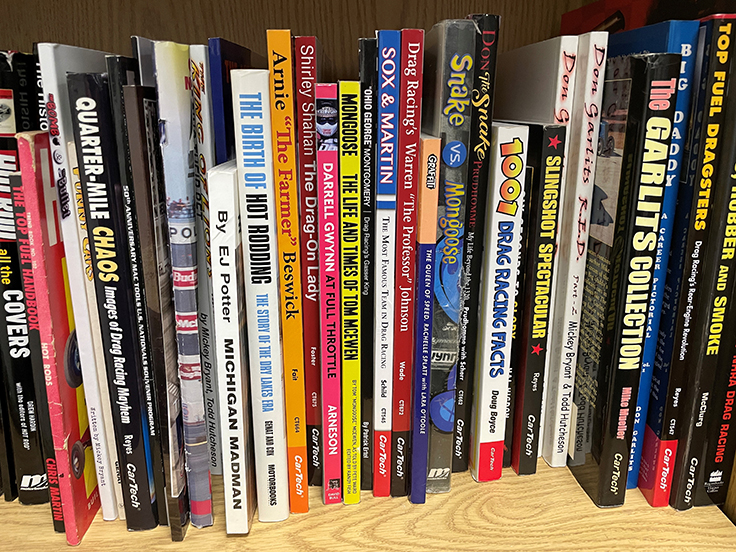 Great American writer Ralph Waldo Emerson once said, “A man is known by the books he reads,” and if that’s true, you know me as a lover of drag racing history and people. Well, if you’ve been around this library very long, you probably already knew that, but my office bookshelves are lined with dozens of books about the people and moments in our sport’s history that I read for enjoyment, for enlightenment, and certainly for research material for this column. From Don Garlits to Don Prudhomme, from Tom McEwen to Tommy Ivo, from E.J Potter to W.J. Warren Johnson, I’ve got quite a collection.

On recent flights across the country to national events, I’ve had the company of a quartet of new books sent my way that might be a good addition to your libraries. 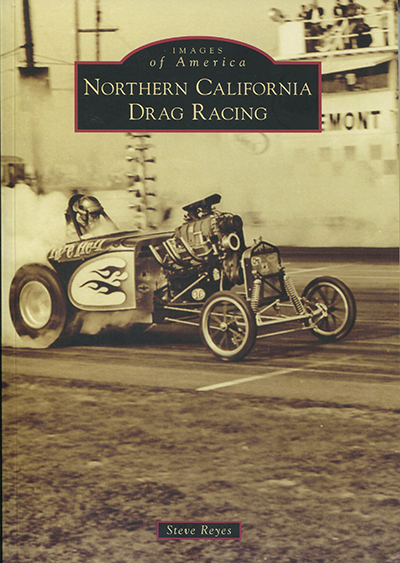 The Insider’s invaluable photo resource, Steve Reyes, has put out a ton of books filled with his amazing photographs, but none is probably nearer and dearer to his heart than his latest book, Northern California Drag Racing. Reyes cut his teeth shooting cars as a teenager in NorCal from 1964-1973 at places like Fremont Dragstrip, Bakersfield Raceway, Half Moon Bay, Sacramento, the Salinas Airfield, and more.

The 126-page book, one of more than 8,000 in Arcadia Publishing’s “Images of America” series, is a photographic trip down Reyes’ memory lane, where he witnesses firsthand the birth of Funny Car, the evolution of Top Fuel, and some of the great quarter-milers from the region, including Gary Ormsby, Frank Bradley, Dave Uyehara, Dennis Baca, and James Warren.

The region was also Ground Zero for the careers of future Funny Car legends like “Jungle Jim” Liberman and Lew Arrington, whose early cars are captured here.

If you were a NorCal fan, you’ll recall names like the “Terrible Ted” Gotelli, the Souza brothers, Don Williamson, Tony Waters, George Santos, Jim Davis, Chuck Flores, and so many more, and here’s your chance to see them again in classic black and white photos that hint at Reyes’ still-growing talents. Reyes’ captions are thick and filled with details.

If you’ve followed this column for any length of time, you know my fondness for the early days of Funny Car (with a major in 1971-76), you know that I’m going to dig any book that covers that fast-moving period of time, and I’ve got two books on the subject, both from the impressive CarTech library, and their respective (and long) titles — Early Funny Cars, 1964-1975: A History of Tech Evolution from Altereds Wheelbase to Match Race Flip Tops and Quarter-Mile Mustangs: The History of Ford's Pony Car at the Dragstrip 1964 1/2-1978 — pretty much gives you an idea of where they are headed. 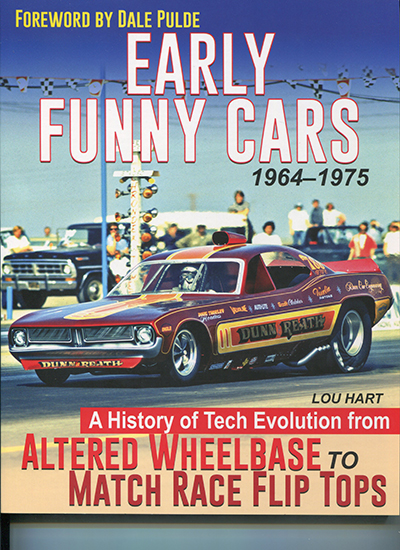 The first of the two, which covers all manner of flopper, including and outside the Ford family, was penned by Lou Hart, whose biography acknowledges that he “is not a professional writer,” but you wouldn’t know it by the quality and depth of the work. He acknowledges the help in direction of Funny Car great Dale Pulde and Valerie Harrell, who obviously steered him well, and Steve Reyes, who contributed many images to the book.

The book tracks the history of the class from its A/FX and X/S roots to the offset wheelbases that earned them the “Funny Car” appellation through its explosive growth in the late 1960s to the superstar era of the 1970s.

The chapters are well-laid out in chronological order and sidebars on everything from the birth of the 426 Hemi to NASCAR’s short involvement in drag racing to Tom McEwen’s Super Mustang and the “Corvette Curse” add depth and color. Hart also has a series of sidebars with Funny Car drivers/tuners like Randy Walls, Bruce Larson, Steve Montrelli, Jake Johnston, and, of course, Pulde, telling their stories in their own words. Hart, who’s already working on his next book, a biography of Roland Leong, goes into great depth about the Coca-Cola Cavalcade tour, the famed Hot Wheels rivalry of Don Prudhomme and Tom McEwen, and Orange County Int’l Raceway.

More than 400 great photos fill this book, giving all of the love and attention so deserved. 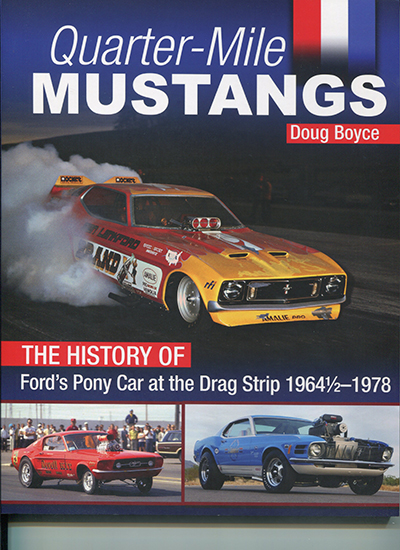 The Ford book is a super-targeted tome, but if you’re a blue oval kind of fan, this one’s for you, especially if you love the Mustang. For me, personally, those Mustang Mac I floppers of the early 1970s were some of the baddest-looking cars on the planet. And author Doug Boyce certainly gives them – and the other ponies in other classes – their due.

I’ve enjoyed Boyce’s other books on Bill Jenkins and Junior Stocker, and his enjoyable 1001 Drag Racing Facts book taught me things I never knew, so I saddled up with great expectations.

All of your favorite Ford superstars are here, from Gas Ronda, Bill Lawton, and Dick Brannan through “Dyno” Don Nicholson, Les Ritchey, Phil Bonner, Hubert Platt, Al Joniec up through Ford superstar Bob Glidden. The chapters cover the rise of the Mustang through its door-car roots up to the fabulous floppers of the Blue Max, Larry Fullerton, Shirl Greer, and other Ford heroes.

Whereas the vast majority of Hart’s photos are black and white, Boyce’s book has more color than black and white among its 300 or so photos. If you love Mustangs on the dragstrip, you’ll want to pony up for this book. 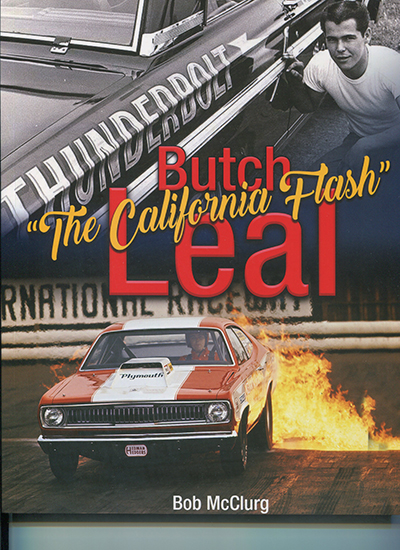 There are few people more personable than Butch Leal, the fabled “California Flash,” and veteran drag racing writer/photographer Bob McClurg was the perfect person to illuminate the life of “the Flash” in a new CarTech offering.

The publisher bills the book as the “first-ever biography” on the multi-talented star, and in 160 pages, it tracks his life from his birth in the Central California town of Tulare through an early grammar-school fascination with cars (“My teachers became so frustrated with me, as I was more interested in drawing pictures of cars on my school papers than I was about learning about math and history," he says.) and his first forays to the dragstrip in Bakersfield in a '60 El Camino 348.

It was during this early time that he first met H.L Shahan, who, with his trail-blazing wife Shirley, would long be part of Leal’s universe. The book tracks, through firsthand reminiscences, anecdotes, and wonderful photos, Leal’s rise through the ranks to joining Mickey Thompson’s Ford Thunderbolt team, success in NHRA Super Stock, and his early (and long-lasting) relationship with Chrysler that spawned some of Leal’s most memorable Pro Stock Mopars and his short but memorable career in Funny Car.

Leal is a master storyteller – and McClurg wisely gives him room to talk as he shares funny stories about not just his own racing career but the people who came into his life. Leal also is an avid (and extremely good) golfer and shares his stories about that passion, too.

If you love Butch Leal (and who doesn’t?), you’ll love this book.