With 86 Top Fuel victories on his scorecard, it would make sense that Tony Schumacher would have accumulated impressive achievements at racetracks all across the country. His history at Texas Motorplex is expectedly impressive, and his six event wins there stand above all other drivers in the class.
15 Oct 2022
Kelly Wade
Feature

With 86 Top Fuel victories on his scorecard, it would make sense that eight-time NHRA Camping World Drag Racing Series champion Tony Schumacher would have accumulated impressive achievements at racetracks all across the country. His history at Texas Motorplex is expectedly impressive, and his six event wins there stand above all other drivers in the class. For Schumacher, this weekend's Texas NHRA FallNationals will bring the opportunity to add to that stately record and to do so in a place that he now calls home.

"Texas Motorplex will always be a special place for me, because it's where I got my first win," said the Austin, Texas, transplant who hails from Chicago. "I had gone to so many finals that year, and to go out and win that race, then go on to win the championship – it'll always have a special place in my heart."

Schumacher made his first start in Indianapolis in 1996, and at that very event, he raced to the final round. He would log two more runner-up finishes in 1997 at various racetracks on the tour, then another in 1998, then four more in 1999 before finally getting that longed-for win light in the closing round in Dallas. 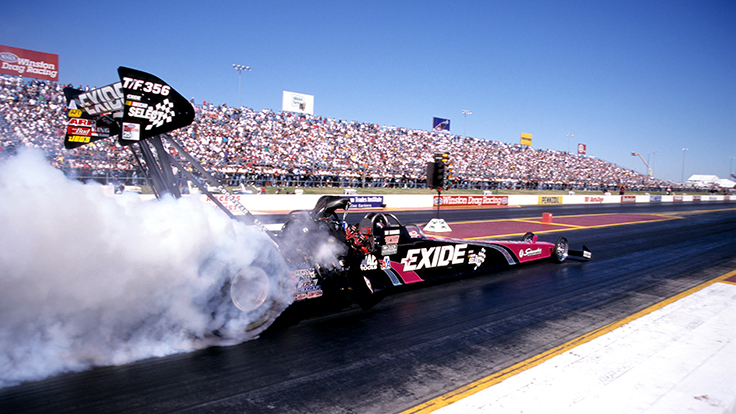 Since that time, Schumacher has claimed additional FallNationals victories in 2004, 2006, 2009, 2010, and 2014. His six triumphant charges at what has been billed as drag racing's first supertrack are second-most overall to seven-time Dallas Funny Car winner John Force. Pro Stock racer Greg Anderson, the most winning driver in his class, also has six trophies earned at Texas Motorplex.

"Not only is that racetrack great, but Christie Meyer Johnson and Billy Meyer, that whole family, they're great people," said Schumacher, who was named a Texas Motorplex Legend in 2020. "I don't get too jacked up about [all] tracks, but with the Motorplex, I do. Texas is 'my people,' and I love going and racing in front of that crowd. They have a good time."

With a win and a final round on his 2022 scorecard, Schumacher will be aiming to finish the year strong, and he'd most certainly enjoy putting the Maynard Family Racing Top Fuel dragster in the winner's circle while flying the Scag Power Equipment colors. This weekend will be the final time he will race with this particular scheme on his car in 2022, although SCAG will serve as the primary backer of Schumacher's 11,000-horsepower machine at all events through 2025.

"The car is getting better and better with the performance, and right now, we're at the place we needed to be at the beginning of the year," said Schumacher. "It's hard when you start a new team. No one really knows each other; new people, new parts and pieces. But as you start to get the performance, it feels good. This is our last opportunity this season to win one in the SCAG colors. It would be a big accomplishment for us."