Camrie Caruso could not have known what she was in for when she stepped into the dog-eat-dog world of Pro Stock at the beginning of the season, but soon enough, Caruso came to understand the inner workings of the class and is experiencing the heightened intensity of a championship chase in a professional category for the first time.
30 Sep 2022
Kelly Wade
Feature

As one twist of the old saying goes, "You don't know until you know." Young Camrie Caruso could not have known what she was in for when she stepped into the dog-eat-dog world of Pro Stock at the beginning of the season. She appeared on the scene fresh-faced and relentlessly grinning from ear-to-ear in a stance that shrouded her own competitive nature, but soon enough, Caruso came to understand the inner workings of the class – and her competitors became aware that in contrast to her buoyant, youthful demeanor, the third-generation racer had not come to play.

This weekend's NHRA Midwest Nationals at World Wide Technology Raceway near St. Louis marks the third of six races in the 2022 NHRA Countdown to the Championship, and Caruso –- driving the Sand Haulers of America Chevrolet Camaro powered by Titan Racing Engines –- is experiencing the heightened intensity of a championship chase in a professional category for the first time.

"The Countdown definitely feels different than the regular season," admitted Caruso, who is No. 9 in the Pro Stock points entering the event. "Everyone is 'daggers out,' and you have to really work to keep your focus. The whole experience has been eye-opening. This is a tough category and the competition level in the Countdown only ratchets up that intensity. But I'm a competitive person, and I'm not going to back down." 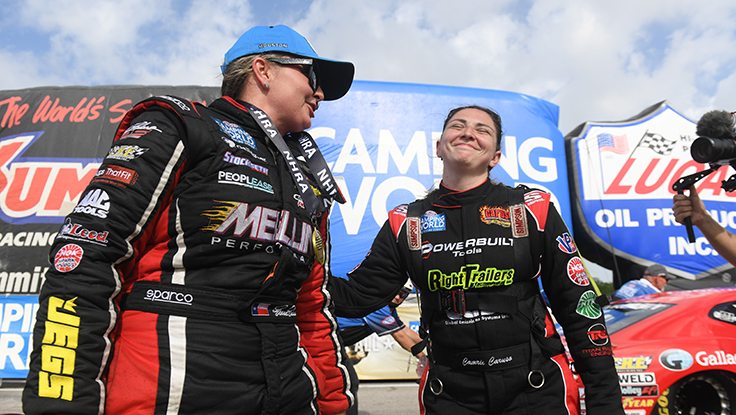 Caruso wasted no time settling into her rookie season, and she earned the first No. 1 qualifier award of her career just five races in. Raceday at the SpringNationals at Houston Raceway Park produced a fiercely intense final round between low qualifier Caruso and the only other female full-time Pro Stock driver on tour: four-time world champion Erica Enders. At her hometown race, Houston native Enders got her glory – and the points lead – as she decisively shut down Caruso in the final, but throughout the regular season, the persistent newcomer performed with enough consistency and power to maintain a position in the top 10.

Caruso fell off some in the first race of the Countdown, qualifying in the bottom half and exiting in the first round, and last week in Charlotte, the Denver, N.C., resident saw a return to power with a top-half qualifying effort. On Sunday, though, as soon as she dropped the clutch in her first-round meeting with Cristian Cuadra, unharnessed horsepower sent her Chevrolet Camaro into ferocious tire shake, and she had to push in the clutch.

"It sucks, but it is what it is," said Caruso, who has two-time Pro Stock champion Jim Yates leading the charge as crew chief and Titan Racing Engines providing the power. "It's been a long time since we've had tire shake like that, and I want to avoid it for as long as possible the rest of the season. It was intense inside this Chevrolet Camaro. 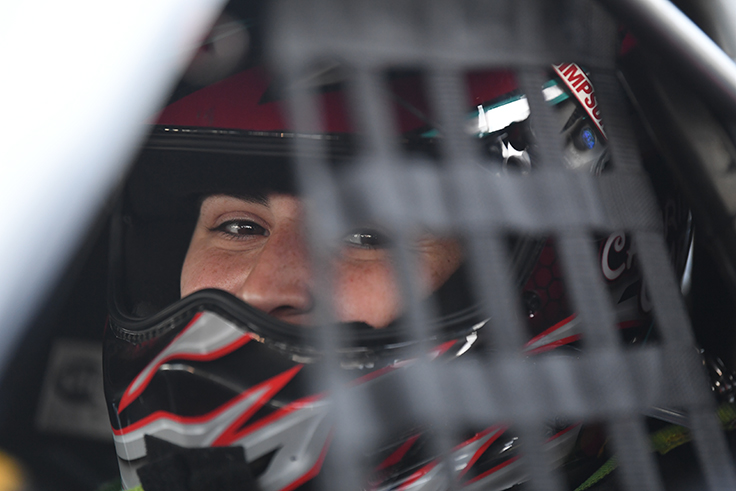 "But we qualified in the top half again, so we're moving in the right direction. I'm proud of my reaction times, and I have a lot of confidence. We're going to keep learning as a team."

She's new to Pro Stock, but Caruso actually had a good bit of experience behind her entering the arena of naturally aspirated factory hot rods. She competed in Jr. Dragster, Super Comp, and Top Alcohol Dragster in NHRA, and she'd grown up watching her father, Marc Caruso, compete in various categories – most recently Pro Mod. Displaying adaptability and a competitive streak that comes alive on track, Caruso earned the Top Alcohol Dragster trophy at a Lucas Oil Drag Racing Series event in Norwalk just two months after receiving her license in 2019.

As the final races of the Countdown come into view, Caruso recognizes that she still has much to learn, and she's already cataloging the lessons she's been taught.

"The biggest thing I've learned this season is how competitive Pro Stock is on and off the track," she said. "You have to be focused every second because if you take your eye off the prize, you're done out here. I have a great group of guys on my team and we are going to keep battling. I'm not going anywhere."