Barry Setzer, who for two years in the early 1970s was the owner of the quickest and fastest Funny Car on the planet, passed away Jan. 31 at age 79.
25 Feb 2022
Phil Burgess, NHRA National Dragster Editor
DRAGSTER Insider

As an impressionable, almost-teenage drag racing fam in the early 1970s whose primary contact with the sport was through the many monthly magazines, Barry Setzer was a bit of an enigma. His name was everywhere in 1972 and ’73, plastered on the side of a bad-ass maroon and gold Vega Funny Car wheeled by Pat Foster, but to many fans like me, he well could have been the Man from U.N.C.L.E. 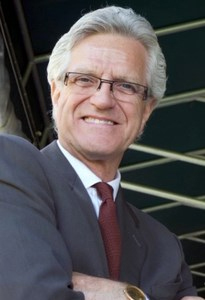 He never did interviews, didn’t always appear in winner’s circles with Foster, and disappeared from public view almost as quickly as his fabulous flopper covered the quarter-mile.

“The spotlight has always been the place where I’ve been least comfortable, and I always thought I should let the car speak for itself,” he explained to me when I finally tracked him down four decades later. “The owner of the great horse Secretariat always said the best spokesman for Secretariat was Secretariat.”

Setzer, who for two years in the early 1970s was the owner of the quickest and fastest Funny Car on the planet, passed away Jan. 31 at age 79. You can find a wonderful obituary for Setzer here, covering his life both in and outside of racing, so I’ll just stick to the highlights of the racing part. 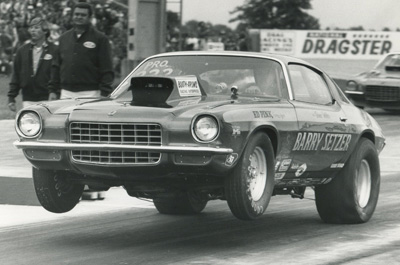 Setzer was a fan of the sport long before he got involved and briefly competed in Super Stock. His first foray into team ownership was not in Funny Car but with match-race-style Pro Stocker with driver Bruce Walker. He had nitro-engine impresario Ed Pink build an all-aluminum engine for the Camaro, and one thing led to another, and before he knew it, he was fielding a Funny Car out of Pink’s SoCal shop.

“I was just an old country boy who had been in awe of all of the California guys,” he said. “But once I got to meet them and spend some time with them, I figured out, ‘Why, hell … they’re just guys, too.’ We started sharing thoughts and ideas, and I really enjoyed that part of it.” 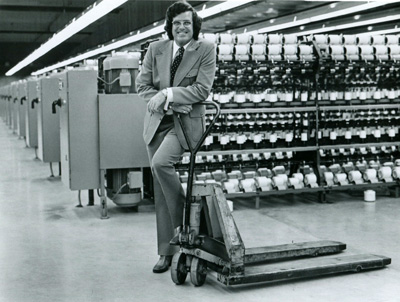 He was just 28 at the time but had amassed wealth through a number of business ventures, the most high profile of which was textiles-leader Barr Craft Knitting. Kelly Brown was his first driver and together they scored a runner-up at the 1971 NHRA Springnationals in Dallas. But as fast as the car was, Foster was quicker at the wheel of Don Cook’s Pink-powered Damn Yankee Barracuda, possessing the clutch knowledge that Setzer’s team lacked, which eventually led to a job offer.

Foster took over the wheel of the candy-red and gold Vega after Indy in 1971 and immediately drove the car to a win at the prestigious Manufacturers Meet at Orange County. They destroyed the match race competition in 1972, especially on the West Coast, winning big shows like OCIR’s Big Four Manufacturers Championship and Hang Ten 500 and smaller weekly shows at Irwindale Raceway. The car was well-traveled as during that same summer stretch they also won the IHRA Pro-Am in Rockingham, N.C., and finished the season with a runner-up at the NHRA Supernationals at Ontario Motor Speedway.

They kicked off 1973 by winning the All-Pro race at OCIR and the IHRA Winternationals at Florida’s Lakeland Dragway, then collected its first NHRA score at the Gatornationals, where it set a new national record of 6.36, backed up by a 6.37 in the final round to defeat Don Schumacher. The Setzer machine went on to record two more NHRA runner-up finishes, at that year's Springnationals and Summernationals, and a win and a trio of runner-ups in IHRA competition.

“We went after it seriously on every run, like every run was for the national championship,” said Foster years ago. “We got chided by some of the smaller teams for running that way, but I told them I had a car owner who wanted to tip the world over every time we went to the starting line and that was my job.”

“Of course, I always wanted to win,” Setzer confirmed, “but I always loved seeing the car go quick and fast, too.”

Foster and Setzer parted company at the end of the 1973 season. Setzer offered to sell the complete operation to Foster, who declined and later very much regretted it. The Setzer name remained visible on a Setzer-branded Vega driven for several seasons by Tommy Grove. Setzer had no real involvement in the car — the arrangement began when Grove garaged his car at Setzer’s shop — but he did work more closely with Lamar Walden on a locally run Pro Stock Vega that carried Setzer’s name in the 1974 and 1975 seasons. 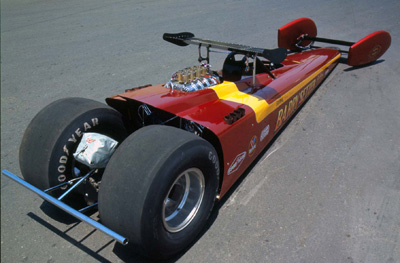 Setzer’s other indelible mark in the sport’s history was the monocoque-chassised Top Fueler he commissioned from John Buttera that I wrote about in a 2010 column that I titled “The prettiest car to ever run only once,” because it never lived up to its expectations.

Not long before his passing in March 2008, Foster said of his longtime friend, “Barry was a quiet, soft-spoken, intelligent man, a man of his word, and always a gentleman. A better car owner would be hard to find. Racing with Barry was certainly the highlight of my career. Barry gave me the opportunity to prove my abilities as a driver and engine and clutch tuner.”

In 2001, Buttera called Setzer “one of my favorite, if not the favorite, customers I ever had. That was back in the days when you could try a lot of new things, and Barry encouraged that. Other people were very demanding, but Barry knew how to say please and thank you.”

"It was a great time in my life,” Setzer told me a few years ago. “I enjoyed traveling around the country and meeting people and being exposed to a lot of different ideas and concepts. I tried to make it to as many races as I could and enjoyed it a lot. I enjoyed the people, especially Pat.”

And we enjoyed watching you and Pat tear up the dragstrip. Thank you, Barry Setzer.