After a monstrous 2021 season, it would be logical to expect that reigning and five-time Pro Stock world champion Greg Anderson would roll into the new year with a bit of momentum. So far, he hasn't yet shown a continuation of the steady hand he possessed all last year but he well understands the ebb and flow of drag racing.
25 May 2022
Kelly Wade
Feature

After a monstrous 2021 season in NHRA's Camping World Drag Racing Series, it would be logical to expect that reigning and five-time Pro Stock world champion Greg Anderson would roll into the new year with a bit of momentum. So far, Pro Stock has been contested at five events, and Anderson hasn't yet shown a continuation of the steady hand he possessed all last year. The seasoned driver who well understands the ebb and flow of drag racing is unperturbed, however.

"I still feel good," said Anderson, who is No. 5 in the Pro Stock points as the naturally aspirated factory hot rods prepare for their return to the series at the upcoming NHRA New England Nationals at New England Dragway in Epping. 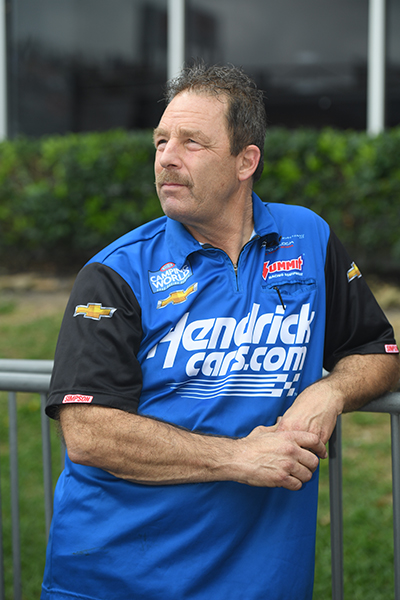 "I feel great about the effort we had last year and the job we did, and I'm not going to forget that," he continued. "I know they say 'you're only as good as your last race,' but I'm not going to think like that. I know how good of a team we are, and I haven't lost faith or confidence."

Anderson explained that there have been small things here and there that have held him and his HendrickCars.com Chevrolet Camaro back, and he believes that the swing of the pendulum could have gone in a more favorable direction with only the slightest effort.

"A little bit of luck here or there, a little better execution, and we could have won," said Anderson. "But I'm encouraged and excited going forward, and I think things are going to be positive in the future."

Anderson started the year as the No. 4 qualifier at the season-opening Winternationals, and he reached the semifinals on Sunday. After a start from the No. 2 position and a slew of bonus qualifying points as one of the quickest drivers on the property at the Las Vegas NHRA Four-Wide Nationals, Anderson went to the next race, in Houston, and advanced to another semifinal round.

"The first three races, we were probably not prepared to win, but these last two, our HendrickCars.com Chevrolet Camaro was a car that could have won," said Anderson. "We got stung, but that's the way drag racing goes. I'm not disappointed, and I know that if we perform better, we'll win. That goes for the driver, too."

Anderson and his KB Racing team have been actively testing in the weeks that have fallen between races. There was a long stretch of days – six weeks, actually – between the Houston race and the upcoming New England Nationals. That's a lot of time for a driver to sit idle, particularly if they're on the cusp of a milestone.

Anderson won the NHRA Finals last fall to score the 99th Pro Stock trophy of his career, and he's paused in position with No. 100 on the horizon.

"It's been a long break; it almost feels like a second offseason, but I think that was good for us," he said. "We needed time to work on our stuff, and we feel we've used our time wisely. We'll be a better race team when we show up at Epping.