Kelly Clontz hasn't had the season she expected, but after navigating personal challenges that left her sidelined for a handful of mid-year races, she's riding into this weekend's Pep Boys NHRA Nationals with an increased appreciation for her career.
15 Sep 2022
Kelly Wade
Feature

Kelly Clontz hasn't had the season she expected, but after navigating personal challenges that left her sidelined for a handful of mid-year races, the Hughesville, Md., competitor is riding into this weekend's Pep Boys NHRA Nationals with an increased appreciation for her career as a Pro Stock Motorcycle rider. She also has a keen eye on how that role has the potential to disrupt the outcome in the final leg of the season.

"I don't know where it came from, but I've always had a passion for motorcycles," said Clontz, a self-proclaimed tomboy amongst the four girls in her family. "I grew up at the racetrack because my dad was a racecar driver, but we were never exposed to motorcycles. I feel like you either love them or hate them, and, for some reason, I was just always attracted to them." 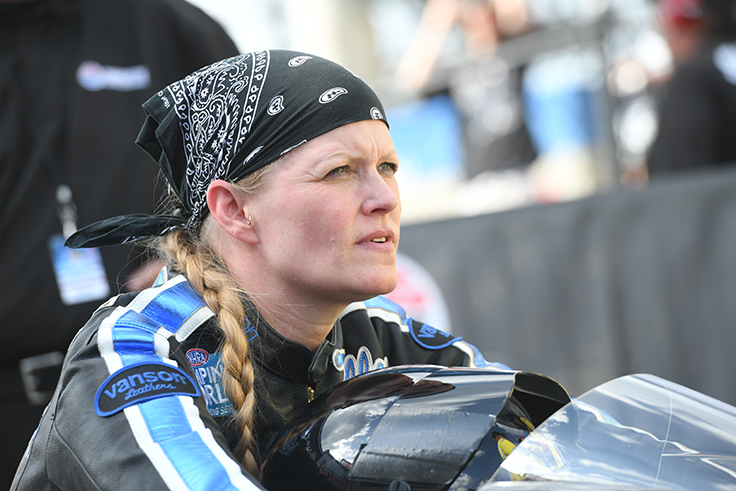 Clontz made a personal connection with the two-wheeled crowd when she met now-husband Chris Clontz at the track in 2001. She was racing her father's altered then, and Chris was riding a Kosman GS. A year later, she made her first runs on the drag bike that belonged to Chris, and in 2003, she was bracket racing a motorcycle of her own.

The steady climb to Pro Stock Motorcycle continued, and in 2011, Clontz was bracket racing on a bike that clocked 7.7-second runs in the quarter-mile. In 2015, she entered the Star Racing Riders Challenge — a unique 25-spot competition put together by team owners George and Jackie Bryce with the ultimate reward at stake:  the opportunity to race alongside then-Star Racing rider Angelle Sampey at an NHRA national event.

Although she did not win the competition, Clontz proved her capabilities and saw a clear destination of becoming an NHRA Pro Stock Motorcycle rider. She made her Professional debut at historic Old Bridge Township Raceway Park in New Jersey in 2017, and she and Chris never looked back. 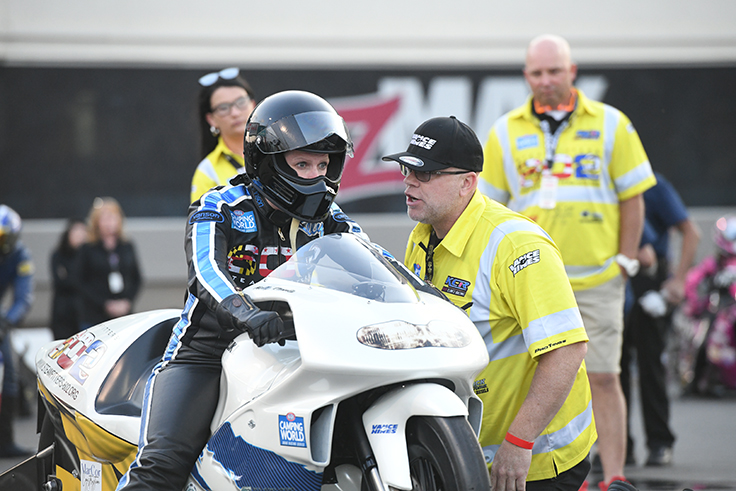 With Steamfitters UA Local 602 on board as sponsors for the fifth consecutive season, it was "full-steam ahead" for Kelly Clontz Racing in 2022 – until they were faced with an unexpected turn of events.

After several abnormal mammograms, it was determined that Clontz needed to undergo further non-life-threatening procedures. Between these precautionary measures and recovery time, she would be off the bike for both the Bristol and Norwalk events, and L.E. Tonglet, the 2010 Pro Stock Motorcycle world champion, was tapped to take her place. Their association stretched back to the day Clontz received her NHRA Pro Stock Motorcycle license: Tonglet was one of the two licensed riders/drivers to sign it.

"It was hard because you have a plan in your head, 'This is what you're doing,' " she said. "Then you have to figure out – should we step back? My grandmother had breast cancer, so this isn't something I wanted to play with. There was so much anxiety around putting it off, but it took me a few days of talking it over with Chris to decide that this was what we were going to do. It was the right decision."

Clontz and Chris also discussed it with each of their sponsors, and with full support, they asked Tonglet to step in.

"L.E. represents the blue-collar worker, he's a firefighter, he does elevator work, and he's just a really good person," said Clontz. "Chris and I built up to where we are now, and we had to put someone on the motorcycle who would represent us well. Hands down, we knew he was the one person we wanted to fill in." 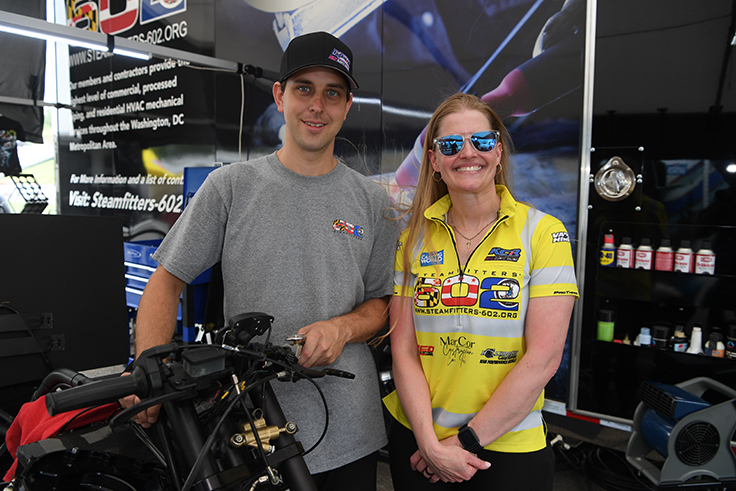 Tonglet qualified for both events, and although he was ousted in the first round by three-time series champion Sampey in Bristol and reigning world champ Matt Smith in Norwalk, the team gained valuable data for their program and kept their sponsors in the spotlight.

Clontz was back on the bike in Denver and Sonoma, and although another procedure necessitated Tonglet taking over one more time at the Topeka event, Clontz and her Steamfitters UA Local 602 Suzuki were reunited for the U.S. Nationals, and she plans to ride the rest of the season.

"Watching L.E. in Norwalk, it was like, 'Chris and I built this. This is everything we worked for.' It was like a switch," recalled Clontz. "It hit me that this is what I'm made to do. It was awesome to get back on the bike, and I feel amazing. I'm fine for the rest of the year. I'm not taking off another race."

The remaining events on the Pro Stock Motorcycle class schedule in the 2022 NHRA Camping World Drag Racing Series include this weekend's Pep Boys NHRA Nationals at Maple Grove Raceway in Reading and then the last four races of the year, which will take place in St. Louis, Dallas, Las Vegas, and Pomona. 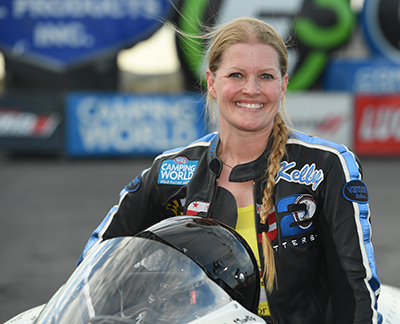 "Consistency is my main focus," she said. "I know I have a fast motorcycle, but this is the hardest motorcycle I've ever ridden. I had to relearn certain skills and then fine-tune what I did know. There is a lot to it, and we haven't won a lot of rounds yet, but when the package comes together, it's going to be game on.

"I would love to be a spoiler [in the Countdown to the Championship], but I can't wait for the day I get to hoist a Wally and shine a light on Chris and all his hard work. Right now, I'm just happy to be here."