After two thrilling and action-packed days of qualifying, the fields are set for the season-ending Auto Club NHRA Finals where champions will be crowned in Top Fuel, Funny Car, and Pro Stock Motorcycle.
12 Nov 2022
NHRA National Dragster staff
Race coverage

After two thrilling and action-packed days of qualifying, the fields are set for the season-ending Auto Club NHRA Finals where champions will be crowned in Top Fuel, Funny Car, and Pro Stock Motorcycle.

After two thrilling and action-packed days of qualifying, the fields are set for the season-ending Auto Club NHRA Finals where champions will be crowned in Top Fuel, Funny Car, and Pro Stock Motorcycle. The stage is now set for what promises to be an epic day of final eliminations, particularly in Top Fuel where leader Brittany Force holds a slim lead over Justin Ashley.

Force easily accomplished her main goal in qualifying, which was to maintain a points lead of any kind over Ashley, and she did that in spades. She entered with a seven-point lead and gobbled up 23 of a possible 26 points in qualifying, running low e.t. of Q2 and Q3 and finishing atop the field for the 10th time this season and 42nd of her career. 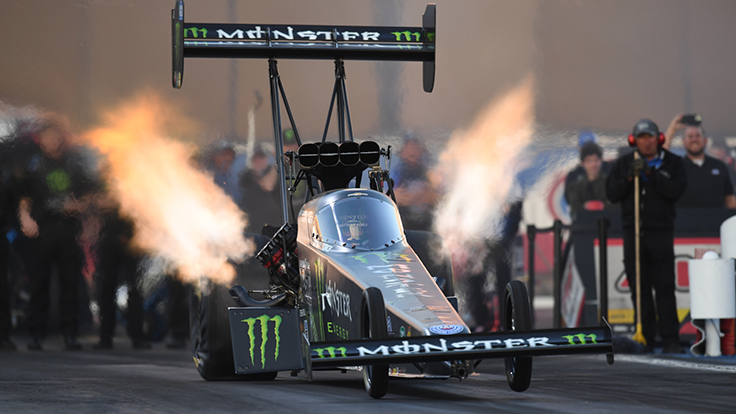 Force expanded her lead to 26 points, meaning that Ashley will have to go one round further than her Sunday to take the lead and that can’t race until the final round. Her run of record was a 3.641 -- the eighth quickest run in history -- recorded Friday night, but she also ran 3.664 and 3.659.

"I feel very good. Going into race day tomorrow, we had four consistent runs. Over the past couple of months, we struggled with those three runs, but four solid runs. We got that No. 1 spot, we picked up some bonus points, so we're going in tomorrow feeling good.

"When we won the championship in 2017, we came in in second place and now we have the lead, so it's a whole different mindset," she said. "I've been here before, that gives me a little bit of confidence coming into it that, We handled it before, it's familiar territory, and we came out on top.   We're in a different position. We're out ahead, but not by very much. It could change so quickly. So really, it's just pulling from past experience. This team is incredible what we've done all season long, what we've done this weekend, we just need to keep on hitting our numbers."

Ashley, who entered the event second in points behind Force, had a consistent quad of qualifying passes -- 3.765, 3.706, 3.735, and 3.713 – but it left him qualified just 10th and facing a first-round race with three-time world champ and technology teammate Antron Brown.

Four-time and reigning world champ Steve Torrence still has a longshot bid for a fifth and after qualifying No. 2 with a 3.647 and having low e.t. of Q4, he certainly looks like he has the car. Mike Salinas also looked racy with a trio of 3.6-second passes highlighted by a 3.666 on his last pass in the Pep Boys dragster. Salinas remained two rounds behind Force while Brown and Torrende are three rounds back.

The Funny Car points battle went back and forth with Robert Hight working hard to hold his lead of more than 60 points on Matt Hagan and Ron Capps, which would give him a two-round advantage Sunday.

Hight’s Q3 pass of 3.854 was the second-best of the session, earning him three points while Hagan’s 3.867 was fourth-best, and good for only one points, pushing Hight’s lead over Hagan back over 60 points, or two rounds of racing. Hight then pounded out a 3.849 in Q4 to solidify his hold on the No. 3 spot.

Capps, who entered the day on the bump spot, got knocked from the field by Steven Densham’s 3.99 in Q3 but quickly raced his way into the field with a 3.864. That run was third-best run of the round, earning him two points. Capps then dropped jaws everywhere on the final pass of Q4, blasting to a 3.837 at a track-record speed of 337.33 mph that shockingly moved him to the No. 1 spot, earned him four qualifying bonus points (to Hight’s two) and trimmed Hight’s lead down to 57 points.

"I was fighting for my life to keep it between the guardrail and the centerline and it was just hunting and moving," said Capps. "A lot of times you think, 'Well, let's take an E.T. away, but I felt the clutch come in sooner than normal.

"We started the season as the No. 1 qualifier for Winternationals which was crazy as a new owner and I just thought, 'Man how much better can it get and then we go on to win five races and come in and get steal the pole here at the end? This is what I talk about when you get into a race car like this and you wish you could make those runs at those big moments,

In round one, Capps will race Jeff Arend, Hagan will face off with Seven Densham, and Hight will battle Chad Green. Capps and Hight could potentially meet in the semifinals.

"That got us under the two rounds. It's just it gets better and better, and then I find out it's we're on the same side of the ladder, but it's a different day tomorrow: Completely different new track new people, new opponents. big moments, I'm gonna wake up my motorhome here at trackside and I'm gonna have a chance of possibly winning a world championship once again."

Fourteen cars qualified in the three-second zone – the second largest number in class history – and the bump ended up an impressive 4.057 by local favorite Arend in Peter Russo’s entry.

The qualifying lead in Pro Stock changed hands on Saturday afternoon when Troy Coughlin Jr. ran a 6.508 to nudge Friday leader Greg Anderson from the pole. Coughlin, winner of two events this season in his JEGS.com Camaro, will be paired with Australian Shane Tucker when round one begins on Sunday. Coughlin entered the Pomona event as the third-ranked driver in the class but has the ability to catch teammate Aaron Stanfield for the No. 2 spot, behind Erica Enders, who clinched her fifth title two weeks ago in Las Vegas.

Coughlin was the No. 2 seed in Topeka and the Fall Charlotte event, but he does not have a pole position this year. He also picked up four more bonus points in Q4 with a 6.512 which was low for the session.

“I made two clean runs today and that’s what counts,” said Coughlin. “It’s special to be racing here in Pomona. There is nothing like pulling through the breezeway in front of the tower and looking down that 1,320. My hat is off to the guys at Elite Performance. They work hard and with a lot of passion and it shows. This [pole] means a ton. I’ve been coming to the races since I could walk and being the low qualifier here is right near the top of the list for my professional career.

“Tomorrow is a different day,” Coughlin said. “This class is stacked so you’ve got to execute on race day but I’m ready. I wish I could go out there and make a few more runs right now.”

Stacked behind Coughlin and Anderson is a tightly bunched and talented pack that includes Dallas Glenn, Aaron Stanfield, Deric Kramer, Kyle Koretsky, Bo Butner, and Mason McGaha. Most of the fields this year in Pro Stock have been tight, but few rival the Pomona show as there is just a tenth of a second separating Coughlin from Tucker. Alan Prusiensky and Kenny Delco put forth solid efforts during the final session with matching 6.62 runs, but that wasn’t quick enough to crack the fast field.

On name noticeably absent from the top half of the field is world champ Erica Enders, who struggled early in qualifying and could only muster a best of 6.540 in her Elite Camaro. As a result of her struggles, Enders will start from the No. 9 spot. Enders has not been ranked lower than No. 4 at any point this season and the last time she didn’t land in the top half of the show was last year’s Four-Wide event in Las Vegas, where she was 13th.

In Pro Stock Motorcycle, no one was able to touch Angelle Sampey’s track-record 6.703 run from Friday, but several riders came close. Matt Smith, in hot pursuit of a record-tying sixth championship, finished as the No. 2 seed with a 6.719 while championship rival Joey Gladstone overcame some early struggles to land in the No. 3 spot with a 6.720 on his Reed Motorsports Suzuki. 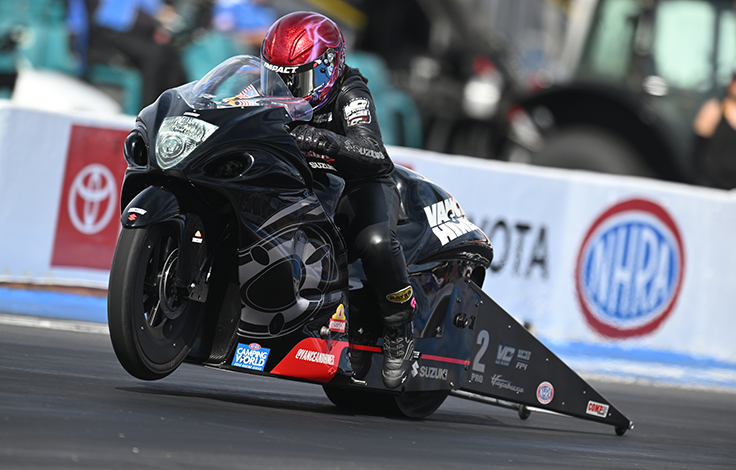 Sampey will kick off eliminations by racing Katie Justice while Smith can lock up the championship by beating Michael Phillips, who has announced his retirement as a rider after this event.

The most shocking news from the day does not involve someone who qualified, but someone who did not. Four-time world champ Eddie Krawiec suffered with an electrical gremlin in his Vance & Hines Suzuki and the team could not find or fix the problem during all four runs. As a result, Krawiec will not race on Sunday for the first time since the Atlanta race in 2007.