Austin Prock, Matt Hagan, Erica Enders, and Angelle Sampey all held onto their Friday qualifying leads through a hot day of racing at the Texas NHRA FallNationals at Texas Motorplex and will led their respective fields into battle on Sunday.
15 Oct 2022
Phil Burgess, NHRA National Dragster Editor
Race coverage

Austin Prock, Matt Hagan, Erica Enders, and Angelle Sampey all held onto their Friday qualifying leads through a hot day of racing at the Texas NHRA FallNationals at Texas Motorplex and will led their respective fields into battle on Sunday.

After blistering the track Friday night with a 3.682 to secure his first career No. 1 qualifying spot, Austin Prock and the Montana Brand team were solid if not spectacular on their two runs Saturday, charting runs of 3.820 and 3.780 that were, respectively, just the seventh and sixth best runs of those sessions. The good news is that the car went down the track on all four passes.

"Other than last night, we've actually been struggling to make power here," said Prock. "We struggled, q1, made some drastic change changes for Q2 and the weather kind of came around with it. Today. the air was worse, we tried to compensate for that., and we didn't have any power again. On that last run, it seemed a little more peppier driving down the racetrack, and I think we did make some gains.

We went down the racetrack all four runs in qualifying, and I think the last time we did that was reading and we ended up with it with a Wally. So hopefully, that'll be the same case tomorrow. We could use a really good day to go some rounds in a win if we want to stay in this [championship] hunt."

Prock’s teammate, Brittany Force, meanwhile, had the best run of both sessions with passes of 3.745 and 3.698 to back up her Friday best of 3.689, but will finish third behind Clay Millican’s3.685.

Alex Laughlin sits on the bump spot of a pretty quick field with a 3.870, ahead of four drivers to failed to make the tough cut, and will face off with Prock in round one.

Points leader Justin Ashley had a rough go in qualifying and finished 10th and will not have lane choice for his first-round race with Kalitta. Force, meanwhile, will face Buddy Hull while Millican draws Kebin Kinsley, who made the field on his final qualifying attempt as a fill-in driver in Dexter Tuttle’s dragster. 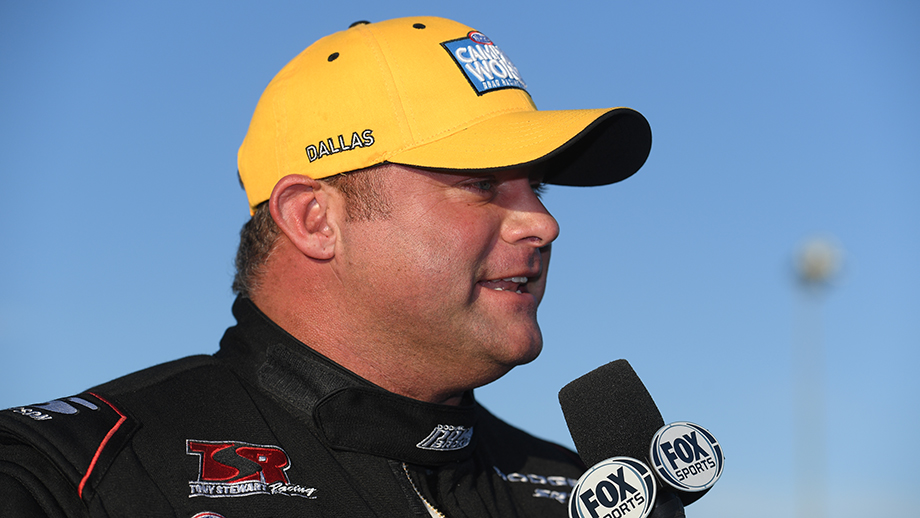 Hagan held onto his Friday No. 1 spot of 3.879 was not seriously challenged. Hagan’s Dickie Venables-tuned Dodge Power Brokers Charger made two steady passes in Sunday’s heat, running 3.900 and 3.893, and was among the quick three in all four qualifying sessions this weekend, including two session-leading passes.

"We've had four really good runs out there and, you know, it's hard to do when you're in a Funny Car," said Hagan. "I mean, you put nitro in the tank, and you never know what's gonna happen. But honestly, just the way Dickie's got this card dialed in this weekend, and the way the cars reacting and driving and just handling, it's just, been great.

"It's just, it's such a cool feeling, you know, to be able to do that, and to go out there with that expectation of doing that, then it comes together. So just shows you what Dickie and the crew and the guys are capable of when the conditions in the track's there."

Points leader Robert Hight also made it down the Texas Motorplex’s all-concrete strip on all four passes but never led a session en route to qualifying No 2 with his Friday night 3.854.

Defending event winner and reigning world champ Ron Capps sits third with a 3.865 but only made it down the track on two of his four passes while Bob Tasca III, who had the best run of the final session at 3.882 also made four three-second passes with a best of 3.879. 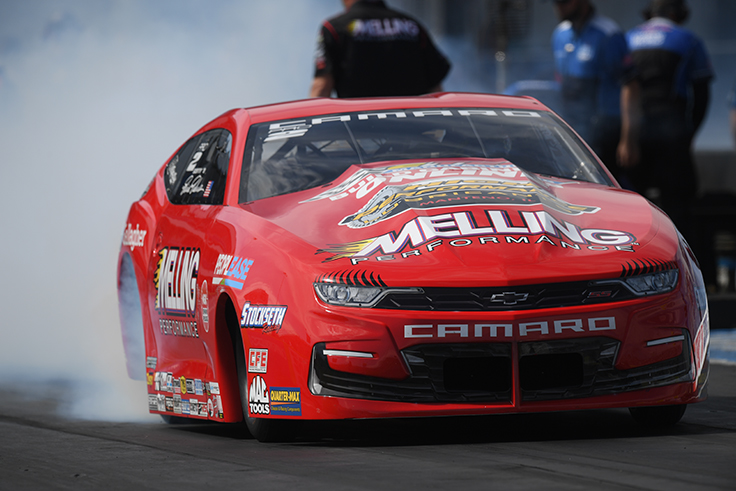 For the second time in the Countdown, Enders swept the maximum points available in qualifying, her red Melling/Elite performance Camaro making the quickest run in all four sessions and grabbing the No. 1 spot for the fifth time this season. Enders’ final pass was just another beatdown on the field as her 6.578 was almost two-hundredths quicker than the next-quickest driver, her Elite teammate Aaron Stanfield, who has had the second-best car through all four sessions. Her run of record for her 28th career No. 1 spot was the 6.523 she recorded Friday night.

"Today's weather is significantly different than yesterday, obviously hotter and a lot wetter. and that's something that our cars don't necessarily appreciate, so to be able to go out there on a tricky racetrack and to go low of the session first round was pretty cool," said Enders.

"The second run was kind of pretty substantial because it just was awesome. I mean, a super, super hot track that was really slick. The car kind of washed out from underneath me a little bit right before the one-two gear change, but when they radioed .57 over my helmet radio is pretty stoked. Tomorrow is going to be a new day, I think the highest like 75 with a lot of chances of the r-word, but we're gonna motor through it and see if we can finish it out. It might be a long day but I'm excited about it. To be on the No. 1 spot to get those 12 bonus points, then going into the No. 1 spot is an additional eight, so that's a full round of racing in normal situations. So that's huge."

Reigning rookie of the year Dallas Glenn took one for the KB Racing team, sacrificing what normally would be a regular spot in the top half of the field to try to qualify No. 16 and earn a first-round date with points leader Enders in an attempt to stop her runaway performance in the Countdown.

Not yet in the show entering Saturday, Glenn — a former NHRA ET bracket racing champion — needed to run quicker than Fernando Cuadra Jr.’s 16th-ranked 6.609 but not quicker than No. 15 Shane Tucker’s 6.602. Glenn got close in the third session with a 6.618 but missed the mark by a ton on his last try, running a 6.779 to record the first DNQ performance of his career. 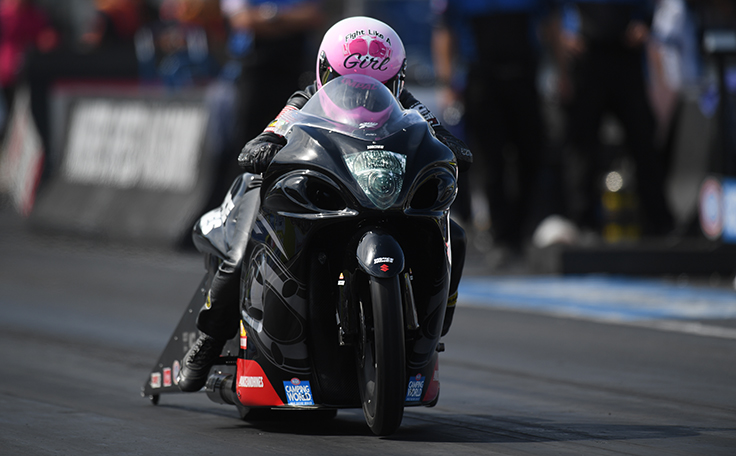 There hadn’t been a lot of joy for Sampey after her opening track-record pass of 6.728 as she double-clutched the transmission Friday night, losing the chance for some bonus money, then had an early-shutoff  6.889 in Q3, well behind session leader and No. 2 qualified points leader Matt Smith’s 6.767. After watching Smith post a dazzling 6.76 in the heat of the day in Q4, Sampey and her Vance & Hines Mission Suzuki team stunned everyone with a 6.759.

"That [6.75] was a really good run for us," she said. "I'm pretty sure it was as solid as the 72, considering the weather conditions were worse. We have the motorcycle to win the race, as we always do every weekend, I just hope and pray that my team has the rider to win the race.

"The competition makes it pretty tough. It's fierce out here these days, just getting past first round is always a task, and if you can go all four rounds on Sunday, you're usually mentally exhausted at the end of the day. I'm hoping that the weather can stay clear for us. I know my team is ready for a win. I know Eddie [Krawiec, teammate] is wanting one as well., so he'll be the one trying to knock down my door. But it's going to be also Matt and Angie [Smith] and everybody else trying to stop us.  I'm just going to try to keep my head straight, have a good time, enjoy the day, and look forward to putting that [symbolic winner] cowboy hat on my head at the end of the day. for the first time."

Sampey will open Sunday against Ryan Oehler while Smith will have a tough draw in national record holder Karen Stoffer.