After growing up racing at Pacific Raceways, Pro Stock’s Dallas Glenn will get the chance to race at the track for the first time as a professional driver during this weekend’s 33rd annual Flav-R-Pac NHRA Northwest Nationals.
29 Jul 2022
Posted by NHRA.com staff
Feature

After growing up racing at Pacific Raceways, Pro Stock’s Dallas Glenn will get the chance to race at the track for the first time as a professional driver during this weekend’s 33rd annual Flav-R-Pac NHRA Northwest Nationals.

The reigning NHRA Rookie of the Year is part of the NHRA Camping World Drag Racing Series’ return to Seattle, and it’s an event that means a great deal to Glenn. He raced in several family cars at the track growing up, moving into Stock in the Sportsman ranks, and at the first NHRA race back at the facility in three years, he’ll perform in front of family and friends in his RAD Torque Systems Chevrolet Camaro.

That brings plenty of anticipation for Glenn, who is currently fifth in Pro Stock points, and while he’s thrilled to get the opportunity to race at Pacific Raceways, he’s determined to keep it business as usual to close out the three-race NHRA Western Swing.

“We’ll have fun, and I’ll enjoy seeing everyone, but when there’s a job to be done, you have to put your head down and work. It would be great to win, but if you can’t see yourself winning every race you go to, you probably need to reevaluate what you’re doing. You have to know you can go out there and do it.”

Austin Prock (Top Fuel), John Force (Funny Car), and Matt Hartford (Pro Stock) won the race in 2019, the last time the NHRA Camping World Drag Racing Series raced at Pacific Raceways. This year’s race will be broadcast on both the FOX broadcast network and FOX Sports 1 (FS1), including live eliminations coverage starting at 4 p.m. ET on Sunday, July 31 on FOX. It is the 11th race of the 2022 Pro Stock season, and Glenn, who is currently fifth in points, views this weekend as a chance to get his season rolling with the Countdown to the Championship quickly approaching. 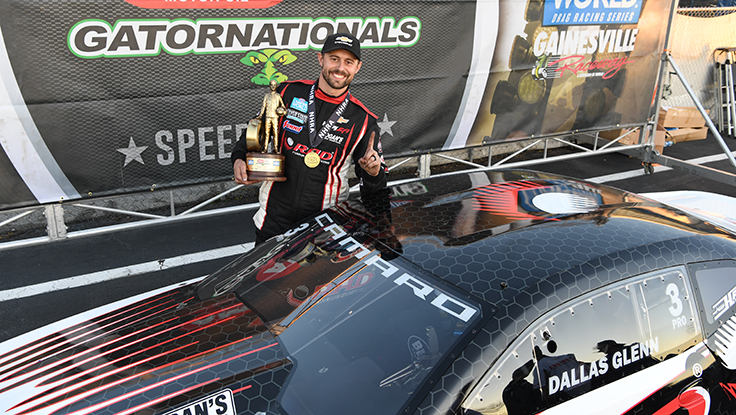 His year started in strong fashion, winning the Gatornationals in March and advancing to the final round of the four-wide race in Las Vegas, but he’s only been to the semifinals once since then. It’s been a difficult Western Swing thus far, though Glenn saw some positives in Sonoma by qualifying fifth and picking up a round-win. That’s a step in the right direction for Glenn, and he is set on taking another step this weekend.

Of course, nothing comes easy in Pro Stock, where Glenn has to deal with the likes of points leader Erica Enders, who continues to enjoy a dominant season, picking up her sixth win of the year last weekend in Sonoma. Others to watch include reigning world champ Greg Anderson, Denver winner Matt Hartford, who won the race in 2019, Aaron Stanfield, Kyle Koretsky, and rookie Camrie Caruso, but Glenn is determined to put on a show.

“I feel pretty good about things,” said Glenn, who has four career wins. “Denver is always tough and totally different from anything we race at. At Sonoma, I felt like we did pretty well. All you can do is kind of chip away, and the biggest thing is making improvements on our end. You need to take the ball into your own hands, put your head down, and keep grinding.

“We’ll keep picking away at it, try some little things and see how the car responds. It’s easy to dig yourself into a hole with these cars, so we just have to keep working. I do feel like I’ve gotten into a better spot than at the beginning of the year, but when the Countdown comes, you have to make sure you’re on your A game. Time is running out to get everything dialed in, so there is increased pressure that way.”