Angelle Sampey will always be the first rider in Pro Stock Motorcycle history to win the NHRA Thunder Valley Nationals at Bristol Dragway, something she accomplished last fall in the category’s first-ever appearance at Thunder Valley.
15 Jun 2022
Posted by NHRA.com staff
Feature

Angelle Sampey will always be the first rider in Pro Stock Motorcycle history to win the NHRA Thunder Valley Nationals at Bristol Dragway, something she accomplished last fall in the category’s first-ever appearance at Thunder Valley.

The three-time world champion would also love to continue to be the only Pro Stock Motorcycle competitor to win in Bristol, something she’ll try to achieve this weekend on her Vance & Hines/Mission Foods Suzuki at the NHRA Thunder Valley Nationals. In a thrilling final round a year ago, Sampey knocked off Karen Stoffer in an all-female final round on a memorable holeshot.

It kept Sampey in the NHRA Camping World Drag Racing Series championship mix a year ago, and she’s after her first win of the 2022 season heading into Father’s Day weekend.

“The facility is phenomenal, and I loved being there,” Sampey said. “It’s so beautiful, and the fans are fantastic. You really have to be focused when you’re racing there, but I’m really looking forward to being there this year and defending my title and keeping my fingers crossed that we can do it again.”

Mike Salinas (Top Fuel), Alexis DeJoria (Funny Car), and Sampey (Pro Stock Motorcycle) all picked up wins last year in Bristol, and this year’s race will be broadcast on FOX broadcast network and FOX Sports 1 (FS1). The Father’s Day weekend race is the fifth race of the 2022 Pro Stock Motorcycle season, and Sampey hopes the return to Bristol gets her year on track.

Sampey, who has 45 career victories, has shown glimpses this season, picking up a No. 1 qualifier in Charlotte and two No. 2 qualifiers. But things haven’t quite clicked on race day, as Sampey hasn’t been out of the second round. She’s placed the brunt of the blame on herself, but it’s impossible to argue with her career track record. 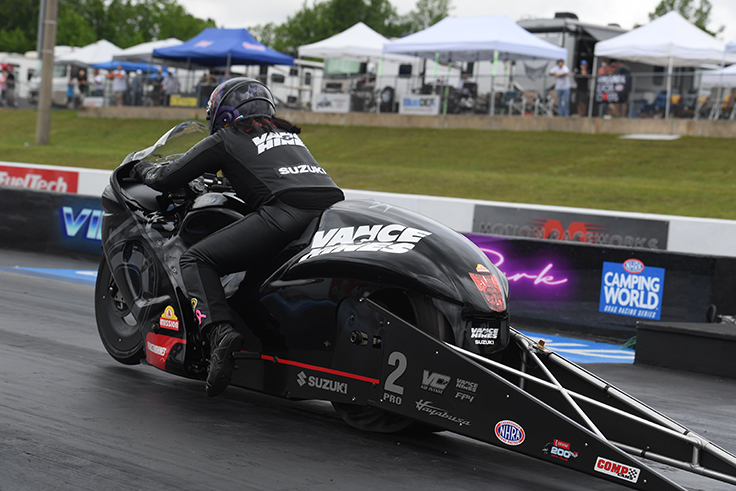 Sampey knows a win is coming if the bike continues to perform like it has, though in Bristol she’ll also have to contend with the likes of points leader Steve Johnson, who has two wins this year, defending world champ Matt Smith, Stoffer, who won in Gainesville, Angie Smith, Eddie Krawiec, Joey Gladstone, and Jimmy Underdahl.

“It’s definitely a confidence boost going into a race that you’ve previously won,” Sampey said. “I haven’t done that well this year thus far, so I need to take my mind off racing and just focus on getting the bike down the track. That’s exactly what needs to happen. My motorcycle is super fast and super strong and where I need it to win. People are figuring out how to make these four-valve Suzuki bikes work, and I just need to get my head in the right place.”

Bristol Dragway will host the special pre-race ceremony that introduces and celebrates each of the drivers racing for the prestigious Wally on Sunday and includes the SealMaster NHRA Track Walk at 11 a.m. The final can’t-miss experience of any NHRA event is the winner’s circle celebration on Sunday after racing concludes, where fans are invited to congratulate the event winners of the NHRA Thunder Valley Nationals.

To purchase tickets to the NHRA Thunder Valley Nationals at Bristol Dragway, call 866-415-4158 or visit www.bristoldragway.com. Children 12 and under are admitted free with a paid adult.