Wearing a serious demeanor as he peered into his log books earlier this summer at Summit Motorsports Park, three-time Comp eliminator champion Frank Aragona Jr. initially seemed to give off a "Do Not Disturb" vibe. But then he looked up, smiled, and waved amiably.

"Come in, come in," he said, swiftly disassembling the initial impression.

Aragona had a story to tell, and he didn't hold back once the conversation began to roll. He explained that in December, a typical hernia operation had revealed a very untypical cancerous tumor that had nestled into the muscle around his stomach.

"Only one in a million people get this very rare form of cancer. I couldn't be lucky hitting the lotto, but I got this angiosarcoma," said Aragona, shaking his head. "If you knew me and would have seen me in March, you would have thought it might be the last time. But it's amazing; it really is. He wasn't ready for me yet."

Aragona wasted no time once the diagnosis was made. With the help of friends and family in the drag racing community and beyond, he sought out the best cancer treatment facilities across the country and spoke with them all, finally landing on Memorial Sloan Kettering Cancer Center in New York, where the now-New Jersey resident had grown up.

"All fingers pointed back to the doctor in New York," said Aragona, husband to Beatrice and father to Frankie III and Emma. "The doctor said, 'You're young, but you have a very aggressive form of cancer. We'd like to treat it very aggressively, and we think you can handle it.' So, that's what we did." 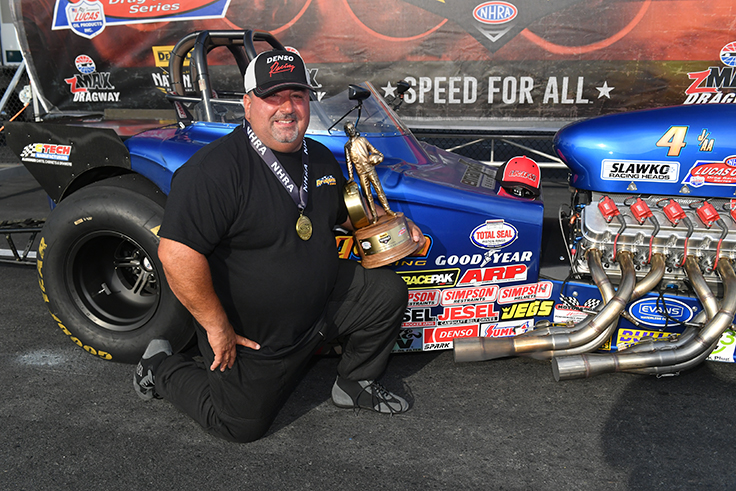 The tumor had grown from 3cm to 8cm in a little more than a month, but the first week of January, Aragona and his medical team began a return attack. He entered a rigorous course of chemo therapy, and for three days in a row, he received the treatment for nine hours a day. Aragona did this every 18 days for three rounds, and ahead of what was to be the fourth and final round, it was determined that his white blood cell count was too low. Rather than receive the fourth treatment, he was hospitalized.

"But it turned out that they had slowed the tumor down and actually stopped it," he said. "They did the surgery to take it out and found it was only 10cm. It didn't spread, and I didn't even need any more chemo or radiation. They had to cut a whole section of my right stomach muscle out and a little bit into the left to get everything, so I was supposed to recuperate for eight weeks. I was dying to get back to racing, but I was very fortunate that the pathology came back that they got everything. "

Aragona missed the first Northeast Division race of the season, but six weeks after the surgery, he had an appointment with his doctor to assess the progress of his healing. Itching to get back to the racetrack, he mentioned to the doctor — in front of his wife and the head nurse — that there was another division race coming up. It would be seven weeks and five days after the operation, and Aragona stated that he would like to compete.

"The nurse was like, 'No.' My wife was like, 'No.' But I felt good; I was just very sore," he recalled. "The doctor told me I was going to feel sore for a year, and that it was always going to feel different than it had before. So, he goes, 'If you feel good, you can do it.' My wife and the nurse were like, 'Don't tell him that!' But we went to Cecil County, and I took it easy."

Aragona raced only his dragster in Comp at Cecil County Dragway in May, and in an almost perfect tale, he reached the final round. The following weekend, he entered Comp with his dragster again at Maple Grove Raceway, and in mid-June, he felt ready to return to the seat of his championship Bantam altered. Although it was a little trickier to climb into, the 2007, 2018, and 2019 Comp eliminator world champion knew he was ready. He immediately raced to the final round at the Lebanon Valley Dragway division race.

Later in June and for the first time since the diagnosis last December, Aragona brought out both his dragster and his altered to race at the Summit Racing Equipment NHRA Nationals. He logged another runner-up for the season there in Comp in Norwalk.

"I was hoping to get a win [by then]," admitted Aragona. "When I got diagnosed, I wasn't sure I would ever race again, much less win. But I've been very fortunate, and if I never won again, I've done a lot in Comp. Three world championships, seven division championships, national event wins, divisional event trophies.

"I was very happy that I always lived my life, worked hard, played hard, and did what I wanted to do. But I have young kids, and when I was diagnosed, they were the only thing on my mind — so we just did everything that we had to do. As far as I'm concerned, those doctors walk on water. It's kind of surreal that I'm here racing two cars, and just a few months ago, I was diagnosed with a life-threatening disease that has a 35% survival rate. I'm very lucky." 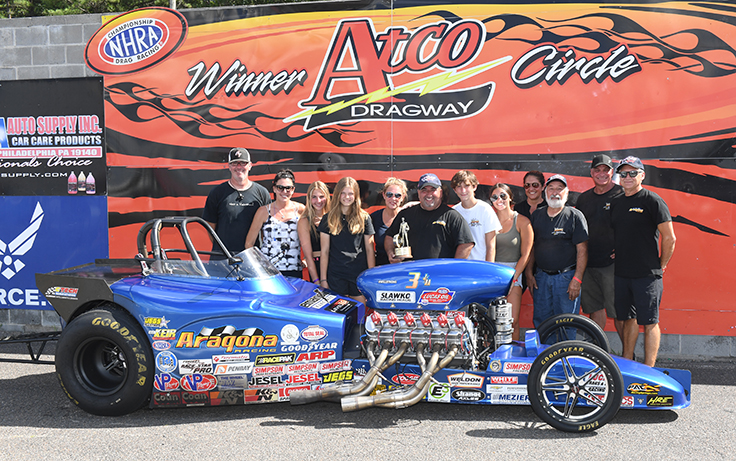 Aragona finally got his first post-cancer win this past weekend at the Atco Dragway divisional event, and before he even got back to the pit area, his phone was blowing up with congratulations on his 40th NHRA Lucas Oil Drag Racing Series victory.

"I'm going to tell you something about friends and family," said an emotional Aragona. "[The first] Atco divisional this year, I couldn't go because of the surgery — but my dad and my cousin said that they would take the kids, so they could race Jrs. there. My friends Tony Iacono and Shawn Fricke, they said they would be there to help. The kids had an entourage with them on the starting line, and they were sending me pictures. It was pretty amazing being home and seeing that.

"I always knew this was a family, but this has been overwhelming. People from all over the country contacted me when they found out about the cancer. People I don't even know were telling me they had been watching me race for years and that I had to get better. It was just amazing. Frank Affronti made decals, there were 'win lights for Frankie' shirts, Jackie Fricke made decals and took her name off the car and put my name on it. People are amazing. That's how I got through it."