By The Numbers: Pro Stock readies for 900th event 'birthday' in Pomona

Pro Stock made its debut at the 1970 Winternationals and will celebrate its 900th competition event at this year’s Lucas Oil NHRA Winternationals presented by ProtectTheHarvest.com. Here's a look at some statistics from the first 899 events.
04 Feb 2022
Phil Burgess, NHRA National Dragster Editor
DRAGSTER Insider

The popular Pro Stock class made its debut on Jan. 30, 1970 at the season-opening Winternationals and will celebrate its 900th competition event at this year’s NHRA Camping World Drag Racing Series season-opening Lucas Oil NHRA Winternationals presented by ProtectTheHarvest.com at Auto Club Raceway at Pomona, Feb. 17-20.

Class icon Bill Jenkins won that inaugural event in 1970 in his Grumpy’s Toy Camaro, and a Camaro, driven by Greg Anderson, won the most recent NHRA Pro Stock event — No. 899 — at the season-ending Auto Club NHRA Finals in Pomona.

While Camaros bookend the current winning history of the class, and Camaros are currently the dominant model — having accounted for the last 103 straight victories in the class dating back to Allen Johnson’s victory in Denver in a Dodge Dart in the summer of 2016 — there have been 34 different models from seven different manufacturers to claim wins in NHRA Pro Stock competition since its inception. (In all, 84 different models from 10 manufacturers have competed in the class since 1970.)  From A to Z (that being Darrell Alderman to Richie Zul), there have been 70 different drivers to claim NHRA national event wins.

Let’s take a look at the class’ top performers over the years. 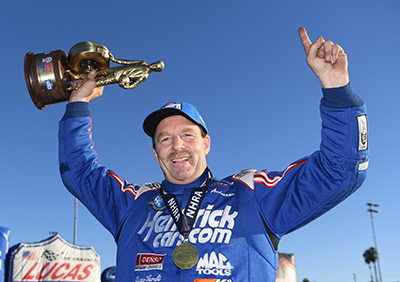 Anderson surpassed Warren Johnson’s 97-wins total with his victory at the Texas NHRA FallNationals last October, then added No. 99 at the season finale in Pomona, setting him up to possibly and serendipitously win his 100th at the class’ 900th event. That makes the math pretty obvious, that Anderson owns about 11% of all wins in the class. Considering the fact that he missed the class’ first 403 events before his debut at the 1998 Springnationals, Anderson to date has scored wins at 19.92% of the NHRA events he has attended, which is about once every five events.

Warren Johnson was the class’ all-time wins leader since his 86th win, at the 2001 Denver event, when he surpassed Bob Glidden’s 85 wins. 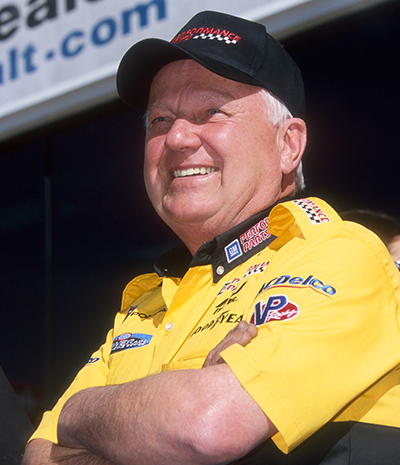 A dozen years ago, it would not have shocked me at all that W.J. owned all three of the performance categories — he is, after all, “the Professor of Pro Stock” — but the fact that he still owns them, more than a decade after his last competitive season, is mind-blowing. Although he didn’t win his first NHRA national event until mid-1982, Johnson scored his first No. 1 qualifier at the 1978 Springnationals (in just his 28th start) to show that he knew how to make power long before he knew how to win. He hasn’t had a No. 1 qualifier since the 2008 Bristol event, but he’s still atop the pack.

And the fact that the first guy to run 180, 190, and 200 mph is the all-time leader in top speeds? Surprised? Me either. For the record, Johnson competed at 649 events and had top speed at more than a third of them!

It’s fun to note that Nos. 1 through 5 on these three lists are the same: W.J., Anderson, Glidden, Jason Line, and Mike Edwards. In my humble opinion, Edwards never gets the respect he’s due. He was a badass. Just a quiet badass.

"The General" owns the top three spots in all-time Pro Stock wins, a staggering 692 wins out of 899 races, led, of course, by Chevy, which has more than 100 more wins than Pontiac. The Camaro is the all-time winner with 228 victories, 138 more than the Pontiac Firebird. 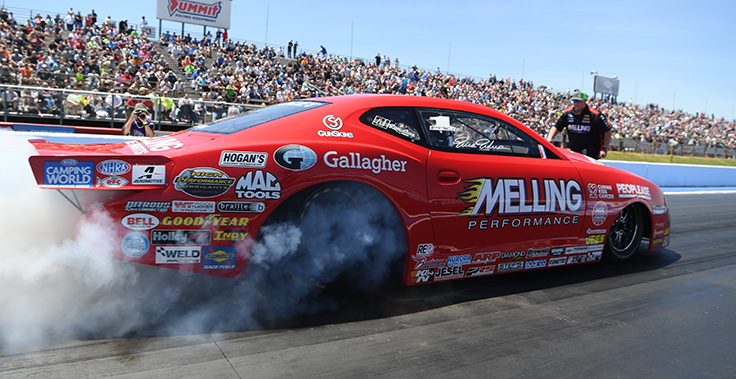 Chevrolet: The Camaro's 228 wins accounts for a huge portion of Chevy's 347 victories, and you'd think that Anderson would be the Camaro wins leader — but he's not. Anderson has 26 wins in a Camaro, tied for second with the late, great Lee Shepherd, but it's Double E, Erica Enders, who owns the most wins in the model with 28. Behind the Camaro's win totals are the Cobalt (54), Cavalier (36), Beretta (11), Vega (11), Monza (6), and Lumina (1). Bruce Allen, Shepherd's successor in the saddle of the vaunted Reher-Morisson machine, has the lone Lumina win, coming at the 1992 Le Grandnational in Montreal. 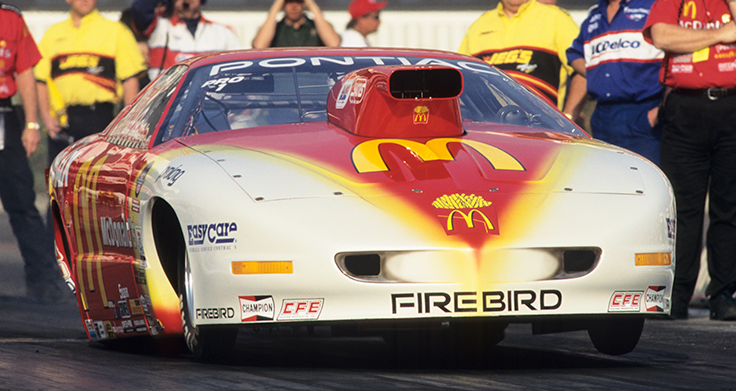 Pontiac: The Camaro's brother, the Firebird, owns 90 on the marquee's Pro Stock wins, with W.J.'s 27 wins leading the way, just ahead of Jim Yates (22). Anderson has 22 of the brand's 66 wins in a Pontiac GXP, just one ahead of Edwards. The Grand Am collected 62 wins and the GTO had 27.

Oldsmobile: The Cutlass (and its Calias and Ciera subsets) was one of the dominant body styles in the early/mid-1990s and accounts for 93 of Olds' 100 wins, Not surprisingly, Pro Stock's "Mr. Olds," Warren Johnson, has 47 of those wins, more than double Jeg Coughlin Jr.'s 20. W.J. also owns the seven other cumulative Olds wins, with four victories in the Firenza and three in the Starfire. In case your math skills are a little rusty, W.J. won 54 of Olds' 100 victories.

Ford: Blue oval fans, get ready for a shocker. As dominant as Johnson was in Oldsmoile's tally, it doesn't hold a candle to what Bob Glidden meant to Ford's Pro Stock effort. The "Mad Dog" from Indiana collected 78 of Ford's 91 wins (85.7%). (Wayne Gapp and Don Nicholson each had six for a distant second place, and Frank Iaconio won the other.)  The Thunderbird garnered 31 of those 91 wins, and Glidden won 30 of them; the lone exception was Iaconio's surprising win at the 1986 Winternationals. Glidden had all 20 of the Ford Probe wins, 14 of the 17 Pinto wins, all 12 Fairmont victories and Ford's lone EXP win (1982 Springnationals). Don Nicholson (3) and Glidden) (2) shared the five Mustang wins, and Wayne Gapp had four of the five Maverick wins (remember the four-door Taxi?) with "Dyno" getting the other (which was actually Ford's first Pro Stock win, recorded at the 1971 Summernationals).

Dodge: The lion's share of Dodge's 89 wins come from the Avenger (34) and Daytona (31), followed by the Stratus (11), Dart (8), Neon (4), and the Challenger (2). Even though his last win came 20 years ago, at the 2002 Gatornationals, Darrell Alderman is still the all-time Dodge wins leader with 28, one more than Dodge's most recent star, Allen Johnson. Twenty-three of Alderman's wins came in a Daytona, from 1989-94, in the "Dodge Boys" heyday, while none of A.J.'s wins came in a Daytona (led by 15 wins in the Avenger). Dodge's two wins in the Challenger were it's first two, recorded by Dick Landy (1970 Summernationals) and Mike Fons (1971 World Finals), the latter of which gave Dodge its first championship.

Plymouth: The manufacturer hasn't had an NHRA Pro Stock win since the 1979 World Finals, which was Bob Glidden's seventh victory of that season in his Plymouth Arrow and accounts for all of the Arrow wins. (The 1979 season will also be remembered for Plymouth's lone win in a Volare when Randy Humphrey scored his first and only career win at the NHRA Mile-High Nationals.) The Arrow is not Plymouth's big winner; that honor, of course, goes to the Barracuda that was its workhorse in the early 1970s. Ronnie Sox scored the manufacturer's first nine wins with the Sox & Martin Barracuda in 1970-71, and Don Carlton added a 10th in 1972. A trio of wins in a Duster (by Herb McCandless, Carlton, and Butch Leal) round out Plymouth's win total.

AMC: All five victories by the "Kenosha Killers" came in a Hornet wheeled by Wally Booth, stretching from the 1974 Gatornationals through the 1976 World Finals. That World Finals victory was especially memorable as he defeated AMC teammate Dane Kanners for the win.

So, there you have it, the history of Pro Stock's first 899 races. I want to acknowledge the assistance of Bob Frey, whose meticulous recordkeeping allowed me to easily track the winners and their car makes, and who also supplied me with other important statistics for this column. You're the best, Bob; kinda like that Glidden guy they named you after.