Throughout its 35-year history, Houston Raceway Park has been home to some of drag racing’s most memorable moments and this year’s swan song event should only add to that legacy.

Everyone wants another chance to win a Houston Wally but perhaps no one more than Steve Torrence. The reigning and four-time Top Fuel champion is the defending event winner, having beaten Doug Kalitta in last year’s final round.  Torrence is still seeking his first win this season, so this would appear to be a perfect opportunity for the Capco team to get on the scoreboard.

Brittany Force comes into Houston with a lot of confidence following her win at the most recent event, the Las Vegas Four Wide race. Force previously won back-to-back Top Fuel title in Houston in 2018-19, so it’s fair to say she enjoys racing in Texas.

So far this season, parity has been the name of the game in Top Fuel with ten different drivers appearing in the final round of the first four events. The most likely drivers to join that group include teammates Doug Kalitta and Shawn Langdon along with Leah Pruett, Josh Hart, and Billy Torrence, who is making his second start of the season.

So far this season in Funny Car, three drivers; Ron Capps, Matt Hagan, and Robert Hight, have collected the lion’s share of the win lights and there’s not much reason to think that trend won’t continue this weekend, or perhaps not.

A number of competitive drivers, led by former champs John Force, Cruz Pedregon, J.R. Todd, along with Alexis DeJoria and Bob Tasca III, have yet to register a win although each of them have been fiercely competitive at each event this season.

Of the driver’s entered in this year’s event, Pedrgon, Force, Todd, Hagan, Hight, Capps, and Tim Wilkerson have previously won in Houston.

If you’re looking for a potential upset, it’s worth noting that Houston Raceway Park is the site of Bob Gilbertson’s upset win over Jerry Toliver in the 2000 final round.

Much like Torrence in Top Fuel, four-time Pro Stock champ Erica Enders has her eyes set on another Houston victory. Enders isn’t just a native Texan, she’s a product of Houston and grew up racing there in the Jr. Drag Racing League. Enders won her first national event title in Houston In Super Gas and has since added a pair of Pro Stock titles in 2014-15. Enders most recent win at the Las Vegas Four Wide race was also one of the more impressive efforts of her career.

Houston has also produced it’s fair share of first time winners in Pro Stock including Mark Pawuk, Mike Edwards, Tom Martino, Jeg Coughlin Jr., Vincent Nobile, Bo Butner, Matt Hartford, and Aaron Stanfield. That should be good news for Troy Coughlin Jr., Mason McGaha, Camrie Caruso, or any member of the Cuadra family, all of whom appear to be knocking on the door.

The Houston event will mark just the second race of the season in Pro Stock Motorcycle and most are anxious to see if Karen Stoffer can repeat her impressive performance from the season-opener in Gainesville. Stoffer didn’t just win the race, she won it in style with a slew of record breaking runs including a 6.66 and 6.68 on race day aboard her Big St. Charles/Skillman Auto Suzuki. Stoffer also has fond memories of Houston, having won her first event here in 2004.

The only other riders in this year’s field who have previously won in Houston are Angelle Sampey, Matt Smith, and Eddie Krawiec and all three should be among the favorites.

NHRA Camping World Drag Racing Series qualifying will feature one round at 6 p.m. ET on Friday, April 22, and the final two rounds of qualifying on Saturday, April 23 at 1 and 4:15 p.m. Final eliminations are scheduled for 11 a.m. on Sunday, April 24. 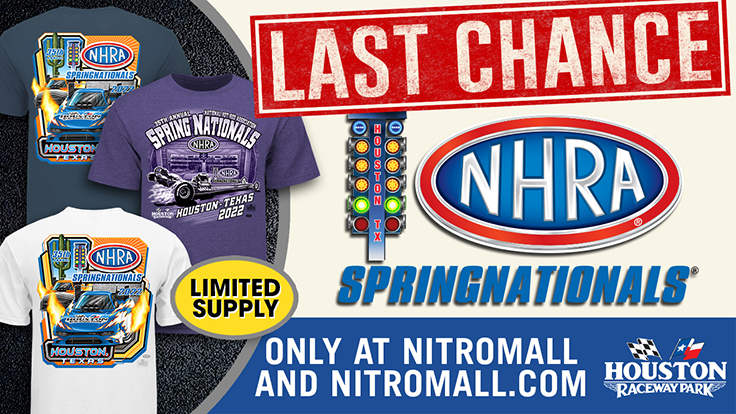