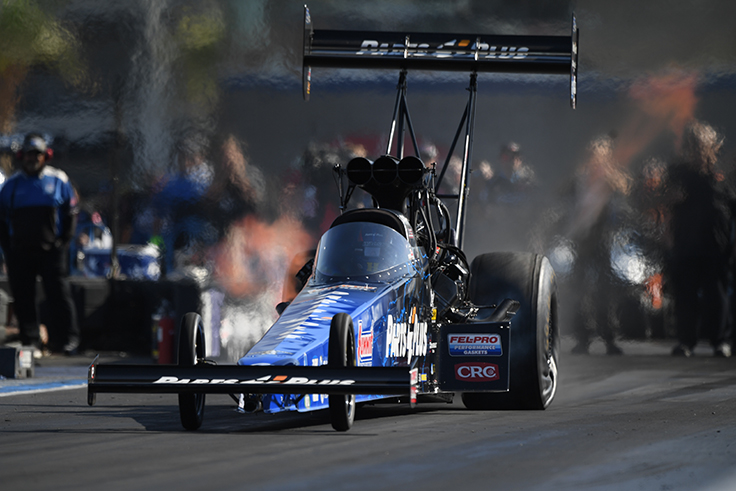 Crew chief Jim Oberhofer continued to get his feet underneath him in his new role as crew chief for Clay Millican’s Parts Plus dragster, backing up his Q4 effort of 3.75 with a solid 3.76 to advance to the semifinals with Austin Prock, who ran 3.80.

Jim Maroney, whose team had to work all night to repair damage after a Q4 explosion caused when the fuel tank ran dry after his routine was comprised by a high idle after the burnout that temporarily prevented him from backing up, had the best light but finished third with a 3.97. 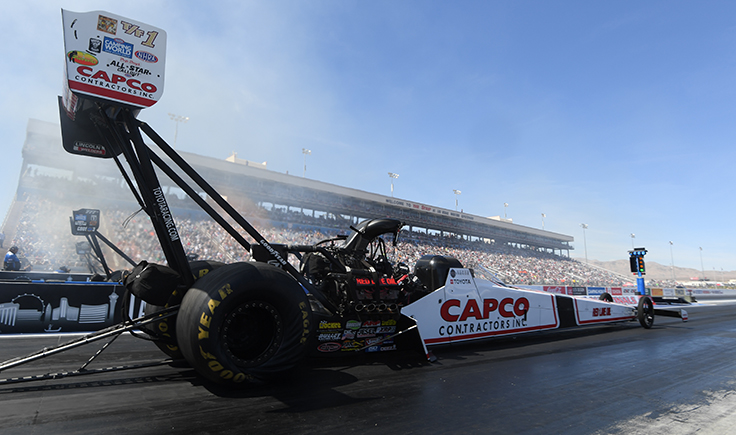 Steve Torrence, winner of six of the last seven four-wide events, ran his round record to 20-1 by winning his first-round quad, finishing ahead of Brittany Force, Josh Hart, and fireballing Cameron Ferre. Torrence’s only miss since winning the 2017 event in Charlotte was a semifinal finish at the 2019 Las Vegas event, where he finished third behind Force and Doug Kalitta.

For the first time in 50 years, neither Top Fuel finalist from the season’s previous race competed at the next race, as neither Amalie Motor Oil NHRA Gatornationals Top Fuel winner Tripp Tatum nor runner-up Doug Foley made the trek westward to the Four-Wide Nationals.

The last time this happened was at the start of the 1972 season, when neither Winternationals winner Carl Olson (pictured) nor runner-up Dennis Baca traveled east for the Gatornationals. Of course, that was a different era, with only eight races on the national event trail and drivers spent the majority of their time match racing instead of in national event competition. 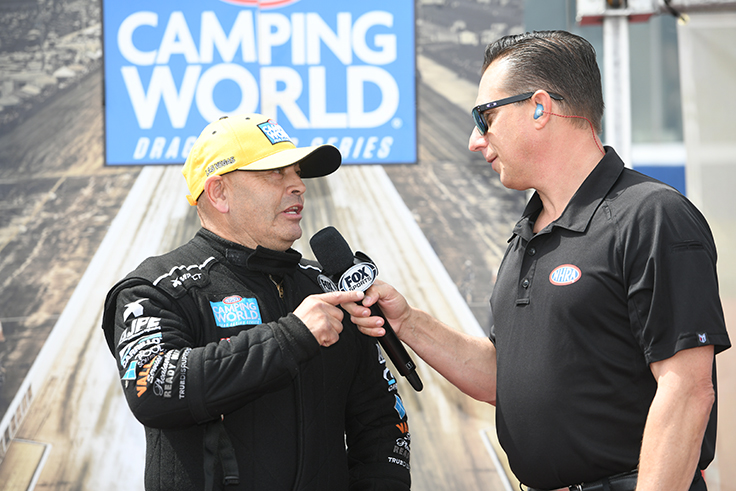 Low qualifier Mike Salinas seemed to have the easiest route to victory in round one with just two other drivers in his quad due to the 15-car field, but the Arizona Nationals winner missed the Tree badly with a .300 reaction time and finished third behind Antron Brown and Tony Schumacher. Salinas actually outran Schumacher, 3.779 to 3.880, but Schumacher had the advantage at the Tree. 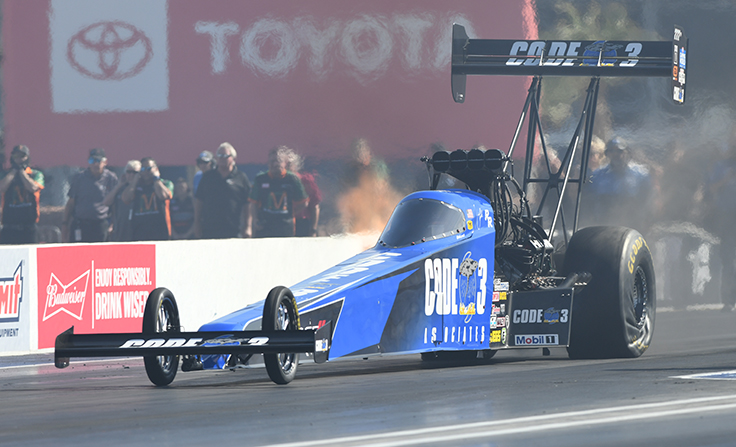 Leah Pruett and the Tony Stewart Racing team got their first round-win of the season, finishing ahead of Shawn Langdon, Doug Kalitta, and Rob Passey. The team, which DNQ'd at the most recent event, the Amalie Motor Oil NHRA Gatornationals, due to the weather-influenced one-shot qualifying, bounced back by qualifying No. 3 in Las Vegas and will advance to the semifinals. 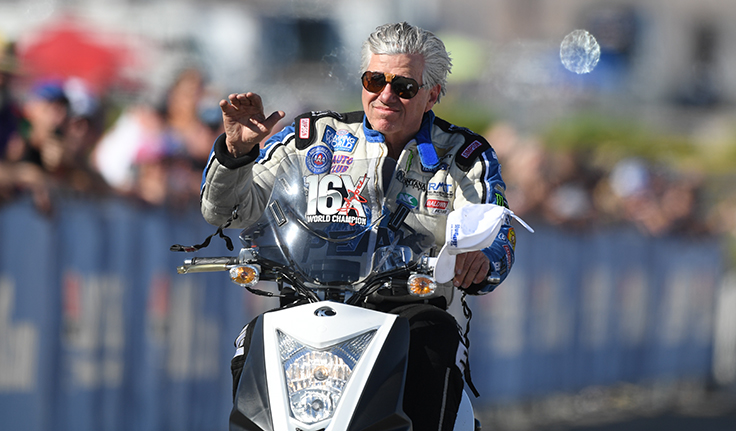 No Funny Car driver had won back-to-back Four-Wide Nationals over the past 14 iterations swapping back and forth between Las Vegas and Charlotte, but John Force, the most recent four-wide winner after his conquest in Charlotte last year, has a chance after winning his first-round quad ahead of Alexis DeJoria, Jim Campbell, and Cruz Pedregon. Force actually finished first on a holeshot over DeJoria, 3.978 to 3.932. 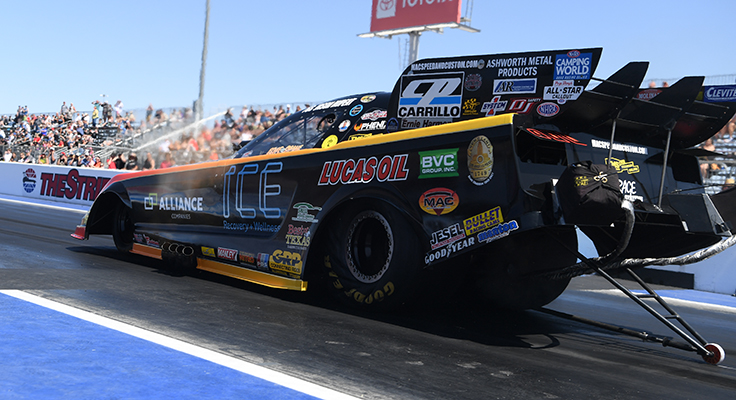 Late Saturday there was a change in the Funny Car standings as Steven Densham was removed from the qualifying order while No. 17 qualifier Jason Rupert was inserted into the field. Densham ran a 4.029 at 308.00 mph to place himself in the field but the run was later disqualified due to what NHRA officials described as a “technical infraction.”

As a result, Rupert, who ran a very competitive 4.076, will make the field for the first time in his professional career. Rupert raced in a quad alongside world champ Ron Capps, Tim Wilkerson, and J.R. Todd, but did not advance.

Chad Green deserved a better fate in his wild first-round quad, posting a 3.937 but nonetheless finished third behind the matching 3.929s of Matt Hagan and Bob Tasca III. Green's pass would have been a winner in two of the other three quads.

Troy Coughlin Jr. is unbeaten in his new JEGS.com Camaro after a close battle against Erica Enders, Steve Graham and Fernando Cuadra Jr. Coughlin, who debuted the new RJ Race Cars Chevy on Friday, drove to a 6.666. Enders also advanced with a 6.667 although Cuadra had the best light with a solid .010 reaction time.

Gainesville winner Dallas Glenn didn’t need a double-oh light to win his quad. In fact, Glenn was less than thrilled with his .053 light but it was enough to advance along with Bo Butner, who previously won the Four Wide Nationals on a triple holeshot.

Kyle Koretsky and Mason McGaha both hammered the Tree with lights off .002 and .014 respectively, and they were rewarded with a trip to the semifinals. Their wins came at the expense of Greg Anderson and Deric Kramer. Koretsky posted a 6.688 while McGaha moved on with a 6.699.

Bo Butner has company in the triple holeshot club after Cristian Cuadra won his quad with a slower elapsed time than any of this three opponents, Aaron Stanfield Matt Hartford, and Camrie Caruso. Cuadra was noticeably ahead at the start with a .001 light while low qualifier Stanfield also advanced.

Grudge racing has become popular at drag strips across North America and that trend has made its way to NHRA, thanks to four of the sport’s best Top Alcohol Funny Car drivers. During Saturday’s third qualifying session, Sean Bellemeur, Doug Gordon, Shane Westerfield, and Chris Marshall squared off with each team posting $1,000 in a winner-take-all grudge race.

Gordon was quickest with a 5.49, but Bellemeur turned on the win light with a 5.51 thanks to his quicker reaction time.

“That was a really cool deal,” said Bellemeur. “That is exactly what this class needs. I hope we can do some more of this and I’d like to see it happen in other classes too.”

The first quad of the semifinals of Top Ful was four-wide racing at its best with all four drivers running within five-hundredths of one another, from Tony Schumacher getting the win with a 3.733 ahead of Antron Brown (3.749), Austin Prock (3.783), and Clay Millican (3.786).

The second quad was almost as good with Brittany Force getting the win with a 3,725 ahead of Steve Torrence’s 3.744. Leah Pruett deserved a better fate than third with a 3.745 while Shawn Langdon brought up the rear with a 3.88.

The Top Fuel final will include four current or former world champions.

It's the first final round of the season for all four drivers. 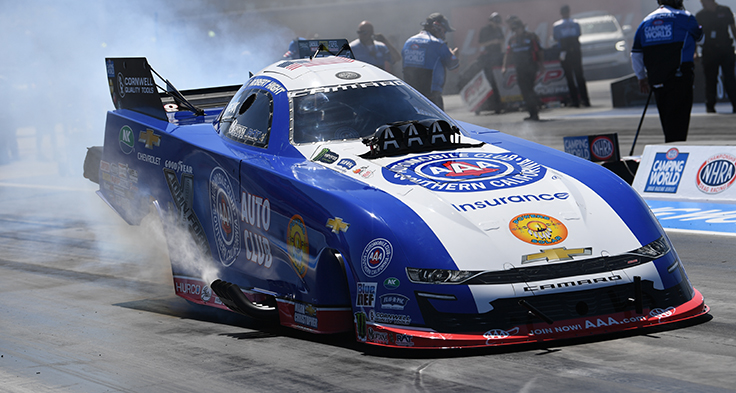 "We've just been looking at our stuff, picking away at it a little bit," said Hight crew chief Jimmy Prock. "We were off a little bit in qualifying, but we just kept working at it and got it to do what we wanted to first round, and we still had some room, so we went and got some of it."

Mason McGaha made it to his third final round on the strength of a .001 reaction time and a 6.711 in his Harlow Sammons Camaro. McGaha, also in the final in both of last year's Four Wide races, advanced along with Dallas Glenn, who had the quickest car in the quad with a 6.682. Glenn will have lane choice in the final as he aims for his second-straight win.

For the second round in a row, Cristian Cuadra holeshotted his way into the final round with a .006 light and a 6.700 to move into the final round. Cuadra will be joined by four-time champ Erica Enders who was also sharp on the Tree with a .018 light. Enders also made the best run in her Melling Camaro with a 6.684.