New car blues? Not for Bo Butner as he pursues an elusive Indy double

It’s no secret that Bo Butner has struggled this year in his return to Pro Stock with his Johnson’s Horsepowered Garage team but recently the tide has begun to turn and from Buter’s perspective, the timing couldn’t be better since the remaining events on the schedule include this weekned’s Dodge Power Brokers U.S. Nationals and the six races in the Countdown to the Championship playoffs.

Butner’s resurgence is due, in large part to a new race car. In Topeka, he debuted a new Rick Jones Race Cars-built Camaro, which was originally built for four-time champ Erica Enders. Butner qualified in the top half of the field in Topeka and beat Matt Hartford in round one. So far at Indy, he’s also among the eight quickest drivers, just a couple of hundredths behind the class leaders.

“Our old car is a good car, it just wasn’t consistent,” said Butner. “We tried a few things during the year and made a lot of progress but this car was available, so we decided to give it a try. I made five runs in Topeka and so far, so good. We struggled for most of the season and yeah, we had the old car headed in the right direction but we also thought, ‘What do we have to lose?’ Honestly, I’ve neve seen a bad Pro Stock car. They’re all capable of being competitive. You just need to find the sweet spot.”

The new Elite-owned car was built for Enders, so things like steering wheel and pedal placement are tailored to her needs, but Butner says he didn’t have an issue adapting to his new surroundings. He brings his own seat insert, which helps elevate the comfort level. Butner also quickly noted that the new car seems to react quicker than his old car, which helps explain his -.010 red-light in Topeka.

“I’ve never had a new car built just for me,” Butner said. “You sit in the car and you’re either comfortable or you’re not. In this case, it’s slightly different from the car I was driving but nothing that makes me concerned. It’s not like one of us is a foot taller than the other one. This car definitely reacts better, so we’re working on adjustments for that. All things considered, I’m in a good spot. Jason [Johnson, owner of Johnson’s Horsepowered Garage] is still having fun with this deal. He understands racing and he knows we’re a new team and it will likely take us a little while to get going but I think we’re a lot more competitive now that we have been.” 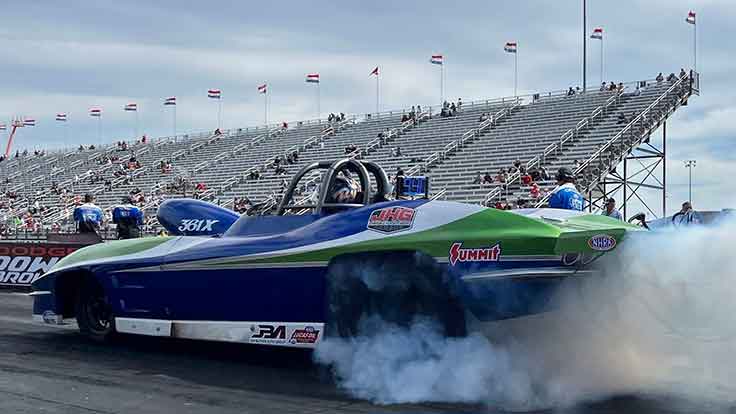 Butner heads into Sunday’s final two qualifying rounds at Indy as the No. 8 qualifier and he’s also grinding his way though a massive 113-car field of Super Gas entries with his Corvette roadster. Butner has already won four rounds, and has made it to the final seven cars that will return on Monday to battle for Indy glory. Butner has been particularly sharp on the starting line with three-straight .00 reaction times.

No driver has ever doubled-up at the Dodge Power Brokers U.S. Nationals in it’s 68-year history, but Butner has the potential to be the first.