A dramatic and positive season for Justin Ashley may have come to a disappointing and premature end with a round-one loss at the Auto Club NHRA Finals, but looking back, the Phillips Connect Top Fuel team has a lot to be happy about.

In his third season in the NHRA Camping World Drag Racing Series, Ashley was in championship contention heading into the final event of the season. As the No. 10 qualifier, Ashley faced an extremely tough draw in round one against three-time world champ Antron Brown, whose team shares a technical alliance. The two Toyota-supported dragsters were each attempting to chase down leader Brittany Force.

Ashley could keep his championship hopes alive with a victory over Brown, and he did his job at the starting line with a slim .045 to .067 reaction-time advantage, but Ashley’s car hazed the tires while Brown turned on the win light with a solid 3.704-second run, the second quickest pass of the session.

“It could be very easy to look at this race under a microscope, and that would be silly. I think it is important to look at the season as a whole,” said Ashley, who ultimately finished in fourth place. “Obviously, we wanted to win the championship, and we gave ourselves a chance to do that with our performance throughout the Countdown [to the Championship]. Our Phillips Connect team has a lot to be grateful for on and off the racetrack. We accomplished a lot of really great things this season. We are going to do a lot of things in the offseason to continue to improve and carry that momentum forward. As good as the Top Fuel field was this year, I think it will only be better next year.” 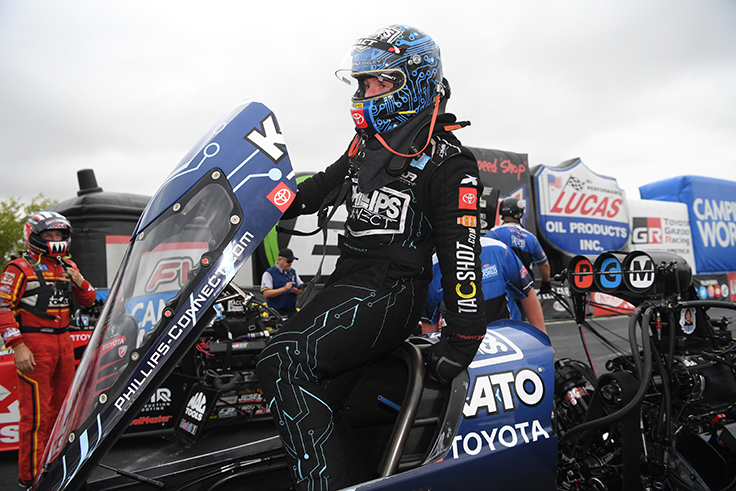 In 2022, Ashley won three national events, including the season-opening NHRA Winternationals in Pomona, the Thunder Valley NHRA Nationals in Bristol, and the Texas NHRA FallNationals in Dallas. He also appeared in four more final rounds. Ashley entered the Countdown as the No. 3 seed and vaulted into to the points lead following a runner-up finish at the first playoff race in Reading. Ashley held the lead until the penultimate playoff race two weeks ago in Las Vegas, when a first-round exit combined with a win by eventual champ Force moved him to second place heading into the season finale.