NHRA does not currently have an award for the most improved racer, but if they did, this year’s edition would almost certainly go to Pro Stock Motorcycle rider Marc Ingwersen. Heading into the 2022 season, Ingwersen had participated in 14 NHRA events and had exactly zero round wins to show for it. He missed the field seven times and never qualified higher than No. 12.

Fast forward to 2022 and things have changed dramatically for Ingwersen and his Ohio-based operation as he’s has shown a dramatic improvement. In 12 races this season, Ingwersen been to the semifinals three times, and he easily qualified for the Countdown to the Championship even though he missed the Sonoma event in July. Ingwersen has a record of 8-12 in elimination rounds and he recently set a career-best with a 6.785 at the Reading event, a number that he was able to repeat two week later in St. Louis. 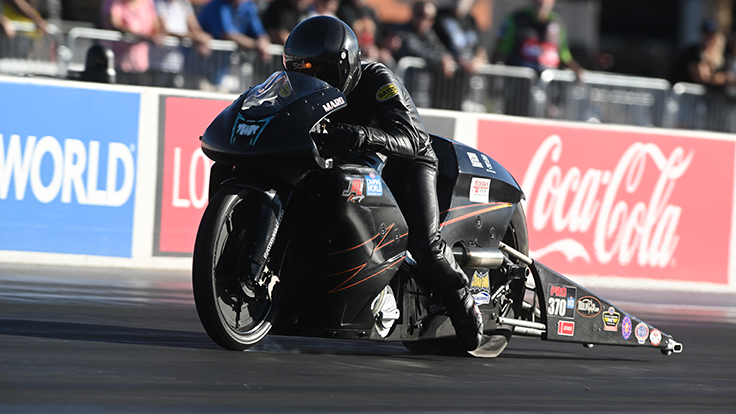 “When we first came out, we had a lot of little problems and little by little, we’ve addressed them,” said Ingwersen, who operates four Harley-Davidson dealerships in Ohio, Kentucky, and North Carolina. “We had electrical issue, clutch issues and a few other technical glitches but we’ve slowly figured them out. We also had one engine and it was the Gen I engine. It has also taken me a while to become one with the bike. Thankfully, I’ve got Jon Miller and his son, Parker, on my crew and they’re really the ones who have gotten us to where we are. Jon and Parker build the engines and they tune the bike. We do all of our own stuff in-house.”

The inaugural round win of Ingwersen’s career was a biggie as he took out three-time world champ Angelle Sampey in March at the season-opening Amalie Motor Oil Gatornationals in Gainesville. A short time later, he proved it wasn’t a fluke with back-to-back semifinals in Richmond and Bristol. So far this season, Ingwersen has beaten Sampey three times, and also scored a huge round win against five-time champ and points leader Matt Smith. His competitors have quickly learned to take him seriously.

“Winning the first round was big, and then going to back-to-back semifinals was definitely a highlight for us,” Ingwersen said. “We came into this year with the goal of being more competitive and hopefully finishing in the Top 10 and now we’ve done that. It’s nice to see that all the hard work that the Millers have done has paid off. I could have gone with a more established program but I believe in Jon and Parker. I may be new, but they’ve been around a while and they’ve accomplished a lot so I was really confident that we’d get to where we wanted to be.”

For someone who came into the class with virtually no drag racing experience, Ingwersen’s rise to prominence has been remarkable, to say the least.

“I know it sounds a bit crazy but this [Pro Stock Motorcycle] is the first thing I’ve raced,” said Ingwersen. “I went to Georg Bryce’s Drag Racing School and rode his Suzuki and then he put me on a Pro Stock Motorcycle. The first time I dumped the clutch it was like being kicked in the rear end by a steel toe boot. It took a while to get sued to it, but this year I feel comfortable, and our results have shown it.”

At this week’s race in Las Vegas, Ingwersen’s Buell is sporting new look as he’s supporting Military Suicide Awareness, a charitable organization that has previously been associated with Pro Stock Motorcycle rookie Richard Gadson. With Gadson unable to attend the Las Vegas race, Ingwersen was happy to support the cause on behalf of the Gadson/Brandt team.

"I was more than happy to help with the Military Suicide Awareness mission Robert [Brandt] and Richard [Gadson] have put together,” said Ingwersen. “Representing Anderson Toyota, Mission22 and Stop Soldier Suicide for them at this race is special to us."

So far, Ingwersen is enjoying his trip to Las Vegas as he’s currently qualified in the top half of the field with a 6.847.