With 11 of 19 Pro Stock races in the books for the 2022 NHRA Camping World Drag Racing Series season, one driver has emerged as the odds-on favorite to win the championship, but Kyle Koretsky wouldn't consider that a wise wager.
11 Aug 2022
Kelly Wade
Feature

With 11 of 19 Pro Stock races in the books for the 2022 NHRA Camping World Drag Racing Series season and one driver emerging as favored to win, a betting man or woman may be tempted to lay money on the outcome. Second-generation class competitor Kyle Koretsky wouldn't consider that a wise wager, however.

"I have it on the wall in my office, 'The championship is the goal,' " said the driver who has hovered in the No. 3 position in the Pro Stock points for most of the year. "We have a car that can get it done, I just have to be the driver to do it."

Koretsky also counts in his favor an unusual statistic: Last season, he finished No. 4 in the nation, and each of the last four champions displayed that particular number on the window of their naturally aspirated factory hot rods during seasons that culminated in ultimate victory.

Bo Butner wore No. 4 in 2017, the year he claimed the title; Tanner Gray had the No. 4 car en route to the 2018 championship; Erica Enders was No. 4 before locking in back-to-back championships in 2019 and 2020; and reigning Pro Stock champion Greg Anderson was No. 4 as he battled to his fifth world title in 2021. 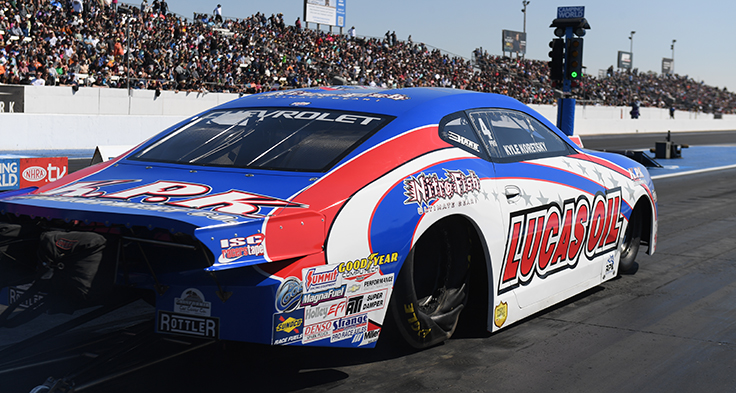 More than just owning a number that has previously shown good fortune, Koretsky is walking the walk. His Lucas Oil-branded KB Racing Chevrolet Camaro has been a steady top-half qualifier to set the tone for Sunday. In Phoenix, he was the No. 1 qualifier, and he narrowly missed the pole at three other events. He's gone rounds at all but two races this year and has finished in the semifinals or better six times.

"I'm definitely happy and excited to be where we are right now," he said. "We obviously want to be No. 1, but our consistency has been good every race. We just try to focus on one race at a time and keep moving forward. Once you go to the second round, let's go to the semi's, then let's go to the finals. We're due for a win, and we have the team to do it. I'm ready to go into the Countdown [to the Championship] here shortly. We're in a good position."

The six-race Countdown to the Championship will kick off next month at the Pep Boys NHRA Nationals at Maple Grove Raceway, Sept. 15-18. For Koretsky, that's particularly significant as his family, led by his father and former Pro Stock racer Kenny Koretsky, recently purchased the historic facility and rallied to have Pro Stock added to the roster. The category had previously been slated for five of the six Countdown events, but the addition of the Reading race means that Koretsky will get to compete at the facility where he grew up watching from the fence and dreaming of a future in the class.

"It's huge to get to race there," shared Koretsky. "It adds a little bit of pressure for me, but I think I perform better under that type of pressure. We'll have a lot of friends and family and fans there, and I'm looking forward to it. I'd probably get a lot of crap for winning that race, but I'm ready to handle that. I would love to win it."

In Koretsky's favor, the launch of the Countdown to the Championship comes with a shake-up in points. Any significant lead will be chopped down, with first and second place separated by 20 points and each remaining position (second through tenth) separated by 10. With nearly a fresh slate for those final six races, having every piece in place from the start will be critical, including the driver's state of mind. 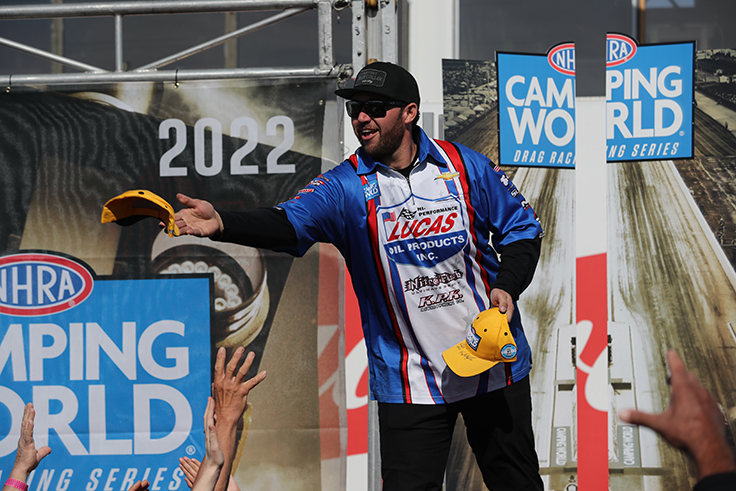 "Mentally, I'm in the race car knowing I can win," said Koretsky. "That's a feeling a lot of people can't say that they have. I know my dad, all of his career, never had that feeling. But as a driver, it gives me all the confidence in the world knowing I'm getting the best equipment and racing with great people. They want to see me win and working under Rob Downing, Dave Connolly, Greg Anderson, and Jason Line — these are people who put the mark on Pro Stock and people I looked up to as a young kid.