John Force says you can call him anything you like, but don't call him the GOAT

He’s got more championships, more race wins, more No. 1 qualifiers, and more individual records than anyone in the sport’s history, but don’t ask John Force to proclaim himself the greatest drag racer of all time. He’s not having any of that.
30 Apr 2022
Phil Burgess, NHRA National Dragster Editor
Feature

He’s got more championships, more race wins, more No. 1 qualifiers, and more individual records than anyone in the sport’s history, but don’t ask John Force to proclaim himself the greatest drag racer of all time. He’s not having any of that.

With 16 world champions 154 race wins, and more than 160 low qualifier awards — numbers that no one will ever surpass – you’d think that Force’s legacy as the sport’s GOAT – maybe the greatest in all of motorsports — would be secure in his mind, but it isn’t.

“I'd only be bull-jiving myself and I don't go there,” he insisted. “I don't think about it. I've had people say, ‘Go after [stock-car great Richard Petty’s record 200 wins], but I never raced Petty. So why would I even say that? 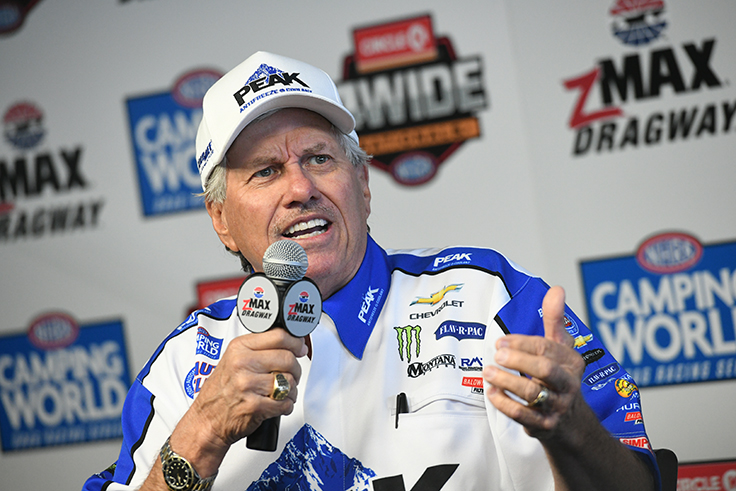 “They said the same thing about [passing Pro Stock great Bob] Glidden,” Force continued, referring to the day he surpassed Glidden’s NHRA record of 85 wins. “Glidden was standing there with me, and he goes, ‘Well, good luck. You can break my record,’ and I said, ‘You're the greatest there, ever, but I never raced you. Why am I going after your record?’ None of that makes sense.

“But the point is, I'm still chasing the Don Prudhommes and the heroes of my era. I'm still chasing them in my mind. That's what motivates me. I'll never be ‘Big Daddy’ Don Garlits. And I'll never be Shirley [Muldowney]. But and I don't want to be. I just want to be John Force a racer that does what he loves. I don't ever want to get compared. I don't want to go down that road.

“I know what I've accomplished. But take away [longtime crew chief] Austin Coil you wouldn’t be looking at a 16-time champ. If you want to give credit, I gave it to Austin Coil and Bernie Fedderly and John Medlen.” 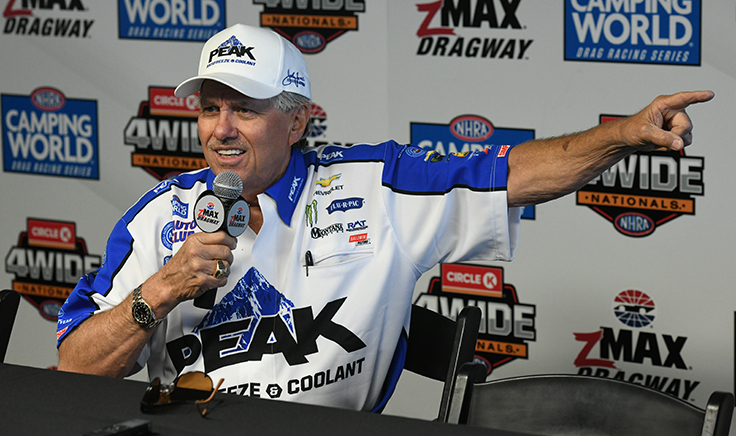 “They were all I lived for,” he said, becoming emotional, a catch in his voice. “You don't understand. I was a kid, right out of school with that dream, just standing at the fence when couldn't afford to get into the racetrack at Pomona and said one day, ‘I'll be out there.’

“And then, sometimes, despite everything that made you, you're at a crossroad, like ‘This is over. You can't make it; you are broke.’ I remember sitting in Memphis at a crossroad. I’m broke, the crew is wanting to beat me up. You reach a point where you say, ‘It’s over,’ and then you go, ‘Is that what Garlits would say?’ What did he say when he lost [half of] his foot [in a 1970 transmission explosion]? What did Prudhomme say when he went over the wall in Montreal [after a 1990 Top Fuel blowover]?’ I was there. I watched him crawl over the wall. It was like, ‘Oh my god, this guy is a god.’ He should be dead, and he crawls back over the wall. 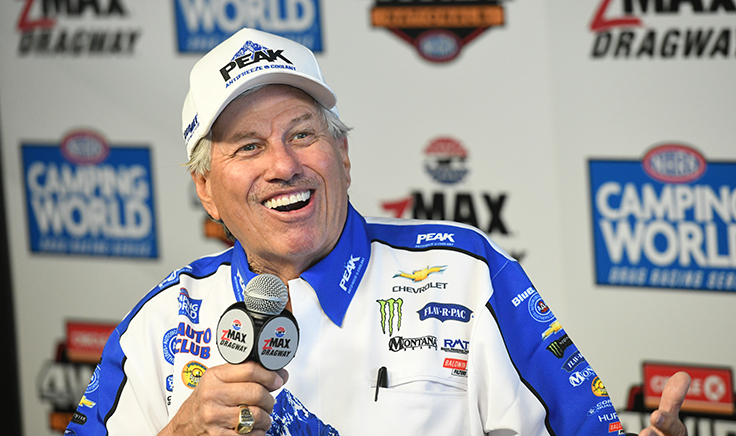 “I love driving nice cars. It makes me young; it puts me out there with these kids, and I've come through generations of drivers. Shirl Greer, who was before me but a champion, and then Prudhomme and [Kenny] Bernstein and [Raymond] Beadle and ‘Jungle Jim’ [Liberman], and I go into the next era of [Whit] Bazemore and [Al] Hoffman, and now it's evolved. We got these kids and half the time I get out of the car I'm trying to figure out who I just raced. I told that [Bobby] Bode kid last week — he was in the [Houston] final, running good, blew that thing up, looked like he had Hagan covered — and I went over I said, ‘Well, at least you get it,’ and the kid, he goes ‘I blew up all my stuff.’ I said ‘You may have lost the race, but you stole all the TV. That's how it really works.' I just want to race these kids, because I see the heart in them.”

He’ll turn 73 next Wednesday, and Force knows that he can’t race forever, that one day he’ll actually have to hang up his helmet, but he knows his legacy will live on through his family. Daughters Ashley, Courtney, and Brittany have all extended the family legacy, and grandkids Autumn, Noah, and Jacob have already shown their skills in Jr. Dragsters.

“If you always notice, I disappear when [Brittany] wins a race because I'm off hiding and crying somewhere because [with her out there] it means I'll never die," he said. "They'll carry me on, you know what I'm saying? And to just think that you accomplished something like that, that's what I'm really all about.

“I thank God every day that I'm here. Next week is my birthday, but I'm gonna be a young kid in that race car. And that's what I do till the end. I just keep going. And I’ll keep chasing those guys.”