For the second-straight year, Steven Comella earned one of the most coveted titles in NHRA Sportsman racing by claiming the top prize in the Dodge Hemi Challenge. Under the lights, and in front of a packed house at Lucas Oil Indianapolis Raceway Park, Comella wheeled his Hemi-powered ’68 Barracuda to an 8.407 in the final to beat first-time finalist Eldon Baum Jr., who red-lighted and then shut off in his ’68 Dodge Dart. Comella has now won nine-straight rounds of competition at the specialty event, which highlights head-to-head competition between vintage Dodge and Plymouth factory race cars. The Dodge Hemi Challenge is now in its 21st season at the Dodge Power Brokers NHRA U.S. Nationals.

As he accepted the trophy and check, Comella was greeted warmly by the big crowd at Indy that has developed a deep appreciation for the Dodge Hemi Challenge program.

“I didn't feel like last year was a very representative year, even though [the car] was really fast and we won," said Comella. "I just wanted to come in this year and kind of run the table and keep it smooth and relaxed. It was important for us to do this this year, to repeat. With these cars there's always an element of throwing a dice against the wall. I was very comfortable all week with the car. I felt like we had a handle on it. I felt like that before and then it won’t go down the track. So I was cautiously optimistic all week.

Comella also couldn't help but take a measure of satisfaction in beating Daniels in the crucial semifinal round.

“It's right up there," Comella said. "I tried to play it cool like it was just okay to compete, but [winning] was something I really wanted to do really bad. I thoroughly enjoy racing [Jimmy] and his old man . They are our friends and there is nothing better than racing him. I absolutely love it and I can’t say enough nice things about him. I think he's a fantastic racer.” 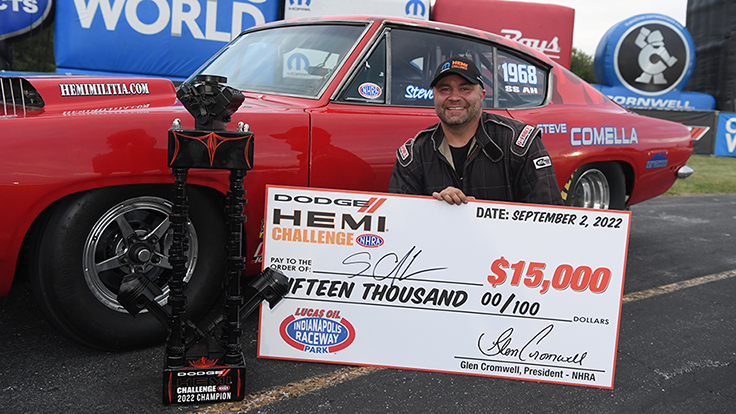 Comella asserted his dominance over the field early in the event when he drove to an 8.421 to lead qualifying for the elite 16 car field of vintage factory-produced race cars. Comella enjoyed a sizable advantage over No. 2 qualifier Jim Pancake, who ran a best of 8.491.

During Friday’s final eliminations, Comella was both quick and consistent with wins against Tony DePillo, Rich Locker, and four-time Hemi Challenge champion Jimmy Daniels. Comella won that pivotal round with an 8.443 to stop Daniels’ 8.527. Comella’s 8.407 in the final was the quickest run of the entire event.

Baum also enjoyed his best day of competition in the Hemi Challenge event when he drove to the final round. Entering eliminations as the No. 8 qualifier with an 8.570 best, Baum worked his way to the final by beating Doug Fazzolore, Benjamin Kimberly, and Gary Wolkwitz. Baum admittedly caught a break in the semifinal round when he spun the tires off the starting line, but won the round because Wolkwitz had left the starting line before the Christmas Tree was activated.