Pro Stock Motorcycle veteran Steve Johnson won less than a week ago in Houston, setting the track record and making his first 200-mph run in the process, all signs that he's got a good chance of repeating last year's win at the Circle K NHRA Four-Wide Nationals.
29 Apr 2022
Posted by NHRA.com staff
Feature

Steve Johnson enjoyed the best season of his NHRA Camping World Drag Racing Series career in 2021, and the resurgence all started with his spectacular performance in Pro Stock Motorcycle a year ago at zMAX Dragway.

Johnson impressed throughout the weekend and came through with his first victory in seven years, propelling a season filled with wins and a championship chase. Back at “the Bellagio of Dragstrips” for this weekend’s Circle K NHRA Four-Wide Nationals, Johnson has carried that momentum into 2022 as well.

The Pro Stock Motorcycle veteran won less than a week ago in Houston, setting the track record and making his first 200-mph run in the process, making him one of the favorites on his USA Electric Suzuki heading into the thrilling four-wide weekend. 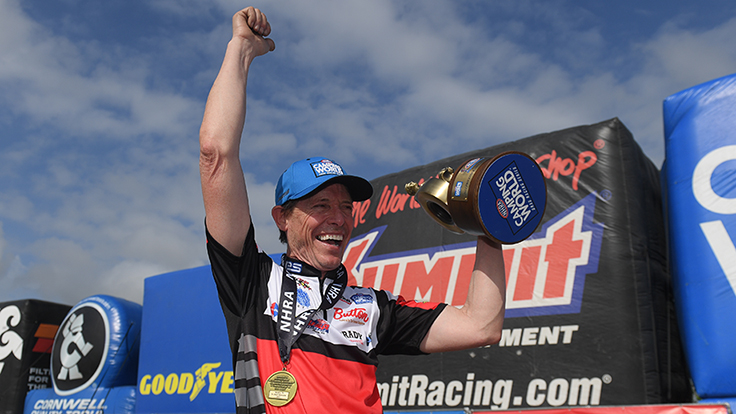 “It was such a special race, and we hadn’t won in a long time [heading into last year’s race],” Johnson said. “They say that vitamin C can cure a common cold, well, winning a race after seven years cures a lot, too. This is all I’ve ever wanted to do, and I’m 100% grateful. We’ve just wanted to stay on this path, and that’s basically what we’re doing since that win, but I’m always looking to try and find something else or ways to make the bike better. Winning in Houston definitely gives us confidence and shows that our recipe is good, and we haven’t forgotten it.”

Steve Torrence (Top Fuel), John Force (Funny Car), and Johnson (Pro Stock Motorcycle) picked up wins last year in Charlotte, and this year’s race will again be broadcast on FOX Sports 1 (FS1). It is the third race during the 2022 Pro Stock Motorcycle season and also the signature event at zMAX Dragway, giving fans the spectacular chance to watch four standouts in the two-wheeled category power down the track.

The performance in Houston was a welcome sign for Johnson, who struggled mightily at the opener in Gainesville. But he’s had the winning touch since his victory last year in Charlotte, where he made the quickest run on a Suzuki at the time in class history and rode that wave to a victory at zMAX Dragway and two other races last year.

The class has a bevy of standouts, including points leader Karen Stoffer, defending world champion Matt Smith, Eddie Krawiec, Angelle Sampey, and Angie Smith, but Johnson remains driven by constant improvement. He enjoyed that for most of the 2021 season, and after a slow start last month, Johnson is headed in the right direction approaching one of the most unique events in motorsports.

“Definitely running the race 4-5 times in your head before you get the track is an advantage,” Johnson said. “Going up there and watching the other classes run is definitely an advantage as well. But no matter how much you want to practice, the four-wide race is still the craziest format our sport has ever seen. Personally, I like it a lot, but you’re constantly learning, and that’s what is exciting.”

To purchase tickets to the NHRA Four-Wide Nationals, please visit www.charlottemotorspeedway.com or call 800-455-3267. Children 13 and under are admitted free in general-admission areas with a paid adult.