When Greg Anderson earned the first Pro Stock win of his career at Bristol Dragway in 2001, he didn't have an inkling of what would come over the course of the next two decades. On Monday at the 68th annual Dodge Power Brokers NHRA U.S. Nationals, Anderson collected the 100th win of his Pro Stock career, and he did it on the largest, most prestigious NHRA stage at historic Lucas Oil Indianapolis Raceway Park.

"I don't know how to explain how meaningful this is to me. It's incredible," said HendrickCars.com Chevrolet Camaro driver Anderson, who has been chasing the milestone of 100 wins since his most recent victory, which took place at the 2021 season finale in Pomona. "I kept asking myself, 'What do I have to do to win?' It wasn't meant to be until now. It was meant to be at Indy. It's an out-of-body experience when you win here, and to win No. 100 at Indy, I just couldn't possibly have asked for anything more."

In his third final of the 2022 season of NHRA's Camping World Drag Racing Series, Anderson squared off with KB Racing teammate Dallas Glenn, who had been characteristically spectacular behind the wheel all day. Glenn, the 2021 NHRA Rookie of the Year, earned the nickname "Double-oh Dallas" in his first year as a driver who could repeatedly launch from the starting line with near-perfect .000 reaction times.

Glenn, who was .005 at the Tree in the semifinals, was ready for his final-round match with the most winning driver in Pro Stock and at the top end proclaimed, "If he wants No. 100, he's going to have to go through me."

The young Glenn was again double-oh in the final, but his reaction time was two-thousandths of a second too quick and counted as a foul. Anderson raced toward a win light that was already flashing on the scoreboard and rounded out his victory lap with a 6.587, 208.07, his quickest pass of the day in the HendrickCars.com Chevy.

The historic victory was also his seventh win on the hallowed grounds in Indy, making him the second-most winning Pro Stock driver at the U.S. Nationals. The only driver in the category to have won more in Indy was the late Bob Glidden, one of Pro Stock's most notable legends. Glidden earned nine Indianapolis wins.

"Bob Glidden was everything I've ever looked up to in Pro Stock," said Anderson. "He was the man, and he was the prime example of 'work hard and you'll never fail.' That man worked harder than anybody I ever knew, and he succeeded because of it. It's pretty doggone neat to be just two wins behind him here. He set the bar, and when somebody sets the bar, you have to go chase it. I'll respect him forever."

As the most winning driver in all of Pro Stock, and now having reached an incredible historic moment by claiming his 100th win at the U.S. Nationals, some may question how long Anderson plans to continue driving a factory hot rod in one of the most challenging categories in NHRA.

"I got No. 100, but I'm not done," stated the 61-year-old reigning and five-time world champion. "I'm not going to quit until I can't get it done anymore. I think it's wonderful that the class is full of all these young guns coming into it; that's what it needed. But if it was just the young guns, it might not have the zip that it has now. You still have a couple of the crusty old guys that can compete with these young whippersnappers and win. I think that's what makes it cool right now, and I'm loving it. 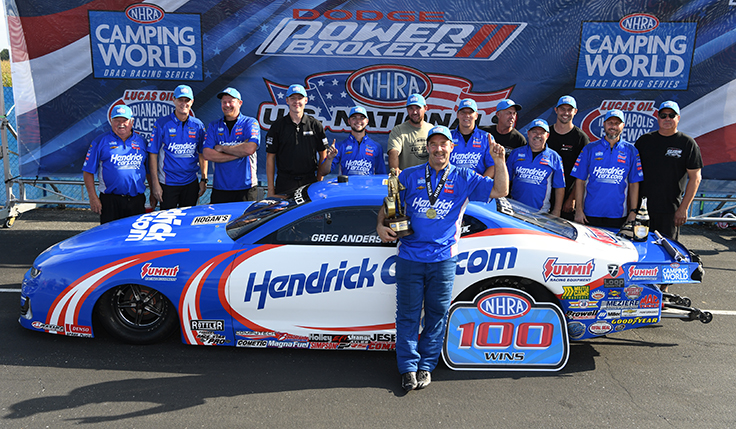 "This is the best win ever. I can't thank Ken and Judy Black and the family enough for this opportunity – 100 wins together," said Anderson, who brought in win No. 175 overall for the KB Racing team. "Thank you, Ken, thank you, Judy. I love you guys so much; you've let me live my dream all these years. Thank you to all our great sponsors, starting with Rick Hendrick and HendrickCars.com. Thank you, Summit Racing Equipment for all the great years, all these wins. Rick Hendrick, you have a pretty cool collection already, but you've got another trophy coming. Chevrolet, DENSO, everybody, thank you so much. And how about this crew? That car was badass all day long."