Although the initial growing pains of becoming a team owner have mostly subsided, Ron Capps heads into this next part of the season with those challenges still fresh in his memory — and he's using them as fuel.
23 May 2022
Kelly Wade
Feature

Reigning Funny Car champion Ron Capps stepped into unfamiliar territory in 2022 as team owner of newly formed Ron Capps Motorsports. Still, behind the wheel of his supremely capable and well-recognized NAPA Auto Parts nitro Funny Car, Capps blasted into the new year with fierce determination and immediate proficiency. It was difficult to believe there was much challenge for the SoCal native in his new role as the man in charge, but Capps admits that there have been sleepless nights, and he doesn’t take all of the credit for how things are coming together.

"It’s really about the people," said Capps, who currently occupies the No. 3 position in the NHRA Camping World Drag Racing Series Funny Car standings. He's claimed the pole three times in the first seven events, started the year with a final-round performance, and claimed his first victory of the season (and 69th of his career) at the Las Vegas NHRA Four-Wide Nationals. 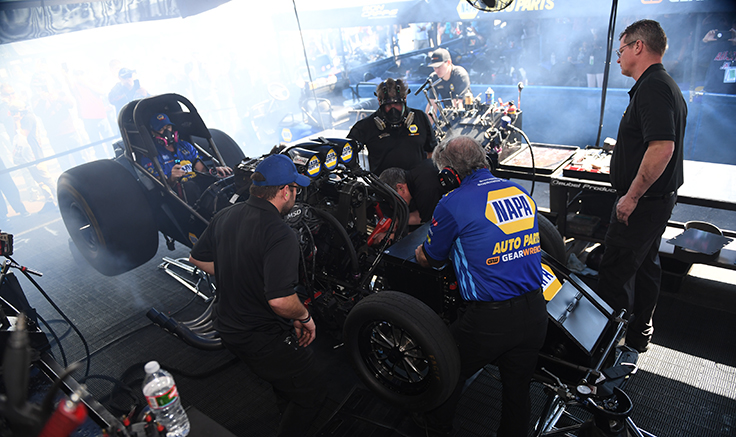 "We’re really one of the very few nitro teams that had every single person come back from last year," he went on to explain. "To me, that’s even more impressive because off I go as a brand-new team owner, and I get to have a world championship team come with me. I’m sure there were opportunities and a lot more money thrown at these guys by other teams, but they all completely wanted to be part of this new venture with me, and it was emotional. I think that’s the reason for our success."

Even before that, though, Capps was thoughtfully gathering advice from those who came before him in the world of nitro team ownership. His network of experienced resources was astounding, and during the offseason, other team owners — as well as some of his own competitors — checked in with him regularly to see what he needed.

That included everyone from the Don Schumacher Racing front office and hospitality team to drag racing legend Don "the Snake" Prudhomme, as well as his wife Lynn, who had been an integral part of Prudhomme's operation behind the scenes and was invaluable in advising Capps in his new venture.

"I had the luxury of a lot of really good people coming forward with support and answers to my questions," said Capps, who drove for Prudhomme before racing with Don Schumacher for many years. "More than anything, they all talked about what a challenge it would be — but how important it is — to separate being the driver from being the team owner at the track." 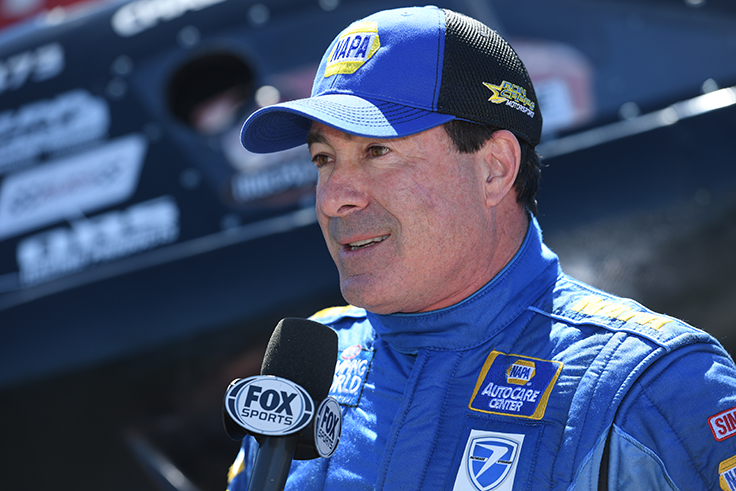 Although he was prepared for it, Capps was faced with that very challenge at the second race on tour, the NHRA Arizona Nationals in Phoenix, where he was defeated on a holeshot in the second round of eliminations.

"I really felt like we had a car to win the race, and I think I let a little bit of the ownership hat get inside the car with me," he admitted. "But it was part of the process, part of growing. Now I have the people around me make sure I don't have anything like that in my brain when I go up to drive the race car on Sunday. It's great to have [co-crew chiefs] Guido and John Medlen being so close. I feel like they know me pretty well now, and in Richmond, I had Guido sit me down and make sure I was focused on being the racecar driver.

"That seems to work for me. I've been lucky to drive with some pretty cool crew chiefs, and I've always walked into the track with the mentality that I'm going to show up and do everything I can to make my crew chief and my team proud."

As if forming a team of his own and going through those growing pains wasn't enough, Capps also made a major move in terms of manufacturer. In the early stages of forming his team, he reached out to all of the major manufacturers, and it was Toyota who stepped forward as an eager partner willing to invest in Capps' vision.

Capps made the announcement before the Charlotte four-wide event and took delivery of his new Toyota GR Supra just prior to the race. It was unveiled, and Capps slid into the driver's seat for the first time for the first round of qualifying. Right away, the NAPA team and Capps found themselves in the zone as they laid down a bold 3.885-second pass at 325.45 mph to jump into the No. 3 position.

Although the initial growing pains have mostly subsided, Capps heads into this next part of the season with those challenges still fresh in his memory — and he's using them as fuel.

"Maybe it's seemed smooth on the outside, but I've had a lot of sleepless nights," he said. "I've had my brother Antron calm me down when I wasn't sure I made the right choice or wasn't sure I could handle it. It's been overwhelming at times, and I've had to go back to school in some ways and learn how to survive and try to be better. But even with the stress, I'm still enjoying it. We're blessed to be able to do this for a living, and if you're not enjoying it and you're aggravated all the time, what's the point? I've been fortunate to have great people around me who share that same feeling. That's what makes this work."