After four rounds of qualifying in the Camping World NHRA Drag Racing Series, Brittany Force, Robert Hight, Erica Enders, and Matt Smith will head into Sunday's final eliminations as the top qualifiers. The event, hosted at The Strip at Las Vegas Motor Speedway, is the penultimate race of the 2022 NHRA Camping World Drag Racing Series season. 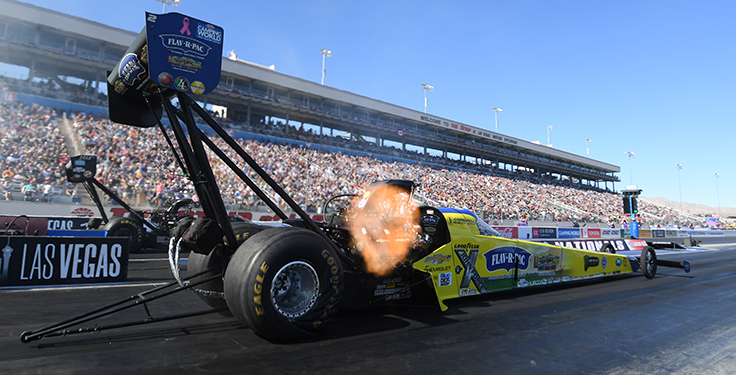 The Top Fuel field put on a slugfest in the final qualifying session, with Tony Schumacher going from deep in the field to No. 2 with a 3.692 only to be bumped down to third by points leader Justin Ashley’s 3.688. A pair later, Austin Prock went to No. 2 with a 3.685 to knock Ashley and Schumacher down a position but none of them could knock Force from her Friday night No. 1 perch of 3.665. It’s her ninth No. 1 of the season.

Force earned 10 of 12 possible bonus points in qualifying plus eight for No. 1, giving her 18 for qualifying compared to points leader Ashley’s haul of nine, allowing her to trim his lead from 82 points to 73. Force also will get a first-round bye due to the 15-car field, adding a for-sure extra 20 points to her total.

"We were looking at that [bye run] when we came in and realized there were only 15 cars," she said. "That's the spot we want to be, we want that No. 1, for points, obviously, but you get the bye into the second round. and it lets us get out there on the track and feel it out before going into the second round.

"Looking at our overall qualifying, we're in a great position. to make four solid passes, all high-.60s  and a .71. It's fantastic for our team, it's four good runs to set up going into race day and gives us all a lot of confidence."

Force’s teammate, Prock, ended up No. 2 and Ashley No. 3 with Schumacher in fourth. It’s just the sixth top-half start of the season for Schumacher and only his second top-four, behind his No. 3 berth in Seattle, where he won.

Funny Car points leader Hight stayed atop the field that he led Friday with a 3.857 but, more importantly, was able to put some distance between himself and second-place Ron Capps. Capps qualified sixth (four points) and earned just one session-bonus point while Hight gathered in eight bonus points and eight points for No. 1 to net out with an 11-point edge on Capps, boosting his incoming lead from 10 to 21, or more than one round of racing.

"Well, I would say that it was mission accomplished in qualifying, because we came in here with a 10-point lead. and now we're 21 points, that's two rounds," he said. "He's gonna have to go two rounds further to catch us. So that's a big deal. That's huge. We gathered a lot of points in qualifying. The first run today [an aborted 4.74], we pushed a little too hard.

Force entered Q3 not in the field but fired off a 3.889 that carried his Peak/Blue Def Camaro quickly to the No. 4 spot and improved to a 3.873 in Q4 but dropped a spot to fifth after Hagan’s run.

Terry Haddock made a heroic final pass, running 4.126 to bump Jeff Arend’s 4.137 from the field. Arend’s Russo Racing team was in line next to run but could not make the pass due to a broken fuel lever, sealing the field. Haddock's run was later disqualified for a technical infraction, re-inserting Arend into the field.

Reigning and champ Erica Enders rallied on Saturday to claim the top spot in Pro Stock as she looks to put the wraps on her fifth world championship this weekend. Enders was second after Friday’s two runs but pushed her Melling/Elite Camaro to a 6.579 on Saturday morning to lock down the top spot and bag three more qualifying bonus points. With nine wins in 11 final rounds, Enders is enjoying the best season of her career and that success extends to qualifying where she has landed in the top spot six times this year.

“Even though we were No. 1, I feel like we were not exactly stellar this weekend,” said Enders. “I feel like we should have made better runs but I’m excited for race day. The rest of the field is nipping at our heels so it’s time to get busy and go to work. All these young guns in the class have pushed me all season long and we need to ride to the occasion.

“I know we’re in a great position to be in, but it’s not over yet,” Enders said. “If I get by the first round, there is a potential monster match-up with the winner of Greg Anderson and Dallas Glenn. I just want this [championship] to be over as soon as possible. My goal is to do a good job. I know I’m in a great position, but I still feel the pressure. It’s hard to explain that feeling in your gut. Sometimes you want to puke in the staging lanes but when you start the car it all goes away. Other than that championship, I’d still like to win 10 races and I’ve got two shots to do it.”

Friday leader Aaron Stanfield held on to the second spot in Pro Stock with a 6.580 best in his Janac Bros Camaro and also banked three bonus points in the final session with a 6.598, the best run of the session.

Deric Kramer made what might well be the run of the event with a 6.586 to qualify No. 3. Kramer’s best previous qualifying performance this season came in Epping, where he was fourth. Kyle Koretsky, Bo Butner, Troy Coughlin, Cristian Cuadra, and Greg Anderson round out the top half of the field.

Some of the most intriguing match-ups of Sunday’s opening round include Anderson vs. teammate Dallas Glenn, Cristian Cuadra vs. Matt Hartford, and Troy Coughlin Jr. vs. Camrie Caruso.

The Pro Stock Motorcycle field was extremely competitive with 20 bikes vying for 16 open spots and no one was quicker than current leader Matt Smith, who moved one step closer to his record-tying sixth championship when he claimed the pole for the fifth time this season and 52nd time in his career, which now spans 296 events. Smith has run in the 6.7s at the last three events and that trend continued in Las Vegas as he rode to a 6.785 on his Denso Buell.

Smith, who also made the quickest run of the final session with a 6.818, will look to add to his impressive points total when he takes on Katie Justice in Sunday’s opening round of eliminations. Justice landed on the bump spot with a solid 6.957-second run on her Suzuki entry.

"I'm happy with everything but Q1 when we were too aggressive and spun the tire," said Smith. "We were quickest in Q2, Q3, and Q4. I've got a shot at a sixth title but we still have a lot of work to do tomorrow. If I just do my job I know we'll be just fine. I've had some people come up and tell me that Joey has conceded but I don't believe it. We all know how quickly things can change here.

"There as still a lot of really good bikes out here," Smith said. "There are seven or eight good bikes out here that can win the race. We got lucky and went to No. 1, but that doesn't mean too much tomorrow. We still need to turn on four win lights."

Angelle Sampey was able to keep the pressure on Smith with a 6.807 best on her Vance & Hines/Mission Foods Suzuki to hold the No. 2 spot while Smith’s wife Angie made a solid 6.816-second run on her Denso Buell to secure the No. 3 spot. Steve Johnson, Jerry Savoie, joey Gladsone, Eddie Krawiec, and Marc Ingwersen round out the top half of the field.

Sampey is paired with recent Dallas winner Hector Arana Jr. while Angie Smith is slated to face 2019 Pomona winner Jianna Evaristo. Championship contender Gladstone will look to add points to his total with a win over Karen Stoffer in round one.