The No. 1 spot was a huge bounce-back for Force’s David Grubnic-led Monster Energy team, which failed to make it down the track on their first two passes, then ran 3.704 Saturday night and the 3.64 in Sunday’s first session.

"It's definitely a big one for our entire team," she said. "David Grubnic, MacSavage, all the Monster boys. This is the biggest race of the season, the Big Go, it's the one race everybody comes to they want to win and you come in with this extra motivation, so to grab that No. 1 qualifier with a killer run after struggling every lap was outstanding. To have the track record, which is pretty cool to be able to do that, and then they announced that it's the quickest field, so [it's great] to be a part of that is history right there.

"Everybody wants to win Indy,' she said. "It's on everyone's bucket list. I've stood in many winner's circles since I was a baby -- my dad; and Ashley has won here -- and it's just one of those bucket list things you everyone wants to check off. There's nothing like this race."

Gatornationals winner Tripp Tatum was the driver who made the field a history maker, as he and a house filled with edge-of-the-seat fans waited out a brief rain shower before he blasted to a 3.739 to bump Kyle Wurtzel’s 3.795.

The rain returned not long after Tatum’s pass, ending the day early with 10 cars — including Force — still to run and NHRA officials decided to seal the field based on the forecast and the amount of rain that fell.

It’s already been a banner weekend for Capps, who not only pocketed the $80,000 top prize for winning the Pep Boys NHRA Funny car Allstar Callout, but the 3.864 pass that he used in the opening round of the specialty event also earned him his first U.S. Nationals pole position. The trick now is if the two-time Indy runner-up he can convert that into his first U.S. Nationals victory.

“I knew I was on a pretty good run the clutch came in,” he said. “It just planted me in the trunk of that Supra. I knew it was gonna be decent, but I had no idea [it would run] .86 in those conditions. That was big.

“We're just gonna take a little bit of time to enjoy being the No. 1 qualifier and we're gonna have a great celebration right now to celebrate [the Callout win], but not too much, and get ready for tomorrow.”

Saturday leader Robert Hight duplicated his field-leading 3.870, also in the first round of the Callout event, but couldn’t get around Capps in the final session to retake his lead.

Fourteen cars qualified in the three-second zone and although there was the possibility of the first all-three-second field, Dale Creasy Jr. ended up on the bump spot with a 4.075 after Justin Schriefer’s last gasp fell .004-second shot and Creasy, safe in the field, opted not to run behind him. 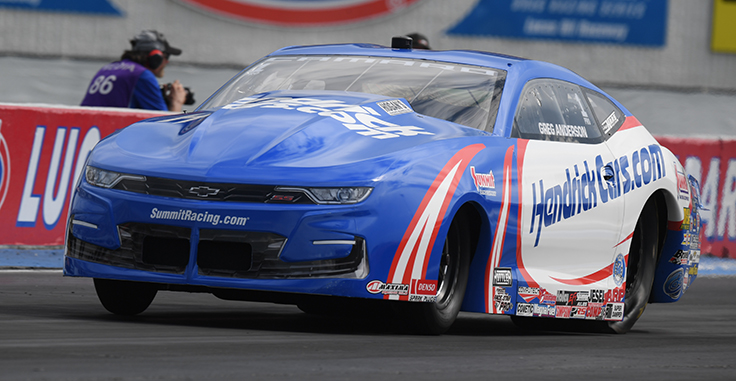 There is just a tenth of a second separating the entire Pro Stock field from Greg Anderson’s 6.567 to Fernando Cuada Sr’s 6.661 making the Indy field not only quick, but also very competitive. Anderson has been the performance leader since taking the top spot on Saturday, and he’s going to lead the field into eliminations for the third time this season and 121st time in his career, which now spans 510 events.

“It’s just nice to have a race car that can win again,” said Anderson, who has won Indy six times, but hasn’t won since 2011. “We were not up to par for the first 8-10 races but we’re back. We’re climbing the ladder and we know that we can win again. Now, we just need to put it all together on Monday. The driver has to have his act together and do a good job. Everyone in this class is a killer; I’ve got two or three guys in my pits that can go .00 almost any time.

“Indy is a marathon so you’ve got to learn to save a little for Monday. It’s been a long week, but it’s been a good week. The track has been great which is why we were able to make four runs that were really close. That helps everyone. Now, it’s just a matter of who can bring the biggest gun tomorrow.”

Anderson has a very slight lead over teammate Dallas Glenn, who ran 6.578 and defending Indy winner Erica Enders, who will start from the No. 3 spot following a 6.582 in her Melling/Elite Camaro. Anderson races Cuadra Sr., while Glenn is paired against Kenny Delco while enders faces a tough draw against Mason McGaha, who has handed Enders two of her six losses this season.

Troy Coughlin Jr., winner of the last two Pro Stock events on the tour, finished as the ninth-quickest qualifier and will not have lane choice when he runs Deric Kramer in round one. Another intriguing match features Kyle Koretsky and Cristian Cuadra in a battle between two of Pro Stock's best starting line drivers. 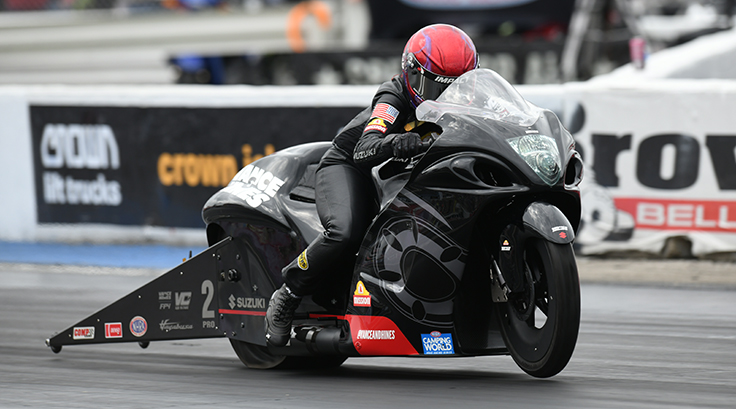 Sampey ran a 6.798 on Saturday and she remains the only Pro Stock Motorcycle rider in the 6.7s with her Vance & Hines/Mission Foods Suzuki. Sampey is already a two-time Indy winner, but looking at the bigger picture, she wants to win a third title in order to secure her spot in the upcoming Countdown to the Championship playoffs. Sampy came into the “Big Go” as the No. 2 seed in the class, just 64 points behind leader Joey Gladstone. With a structure that awards points-and-a-half at Indy, she’s got a reasonable chance to take the lead.

Sampey has qualified lower than fourth just once this season and she’s now led the field four time this season and 57 in her career. Moreover, she’s been the top qualifier seven times at the Dodge Power Brokers U.S. Nationals. Sampey will begin her quest for career win No. 47 with a round one race against Ron Tornow, who is on the bump at 6.945.

“It’s amazing to think I’ve been low qualifier here seven times but that’s my favorite number,” Sampey said. “I’ve been fortunate enough to have good people and good teams for my entire career, especially my current Vance & Hines team. I know it’s expected for me to do well, and I put a lot of pressure on myself and I’m hard on myself when I don’t do well. I know that Matt [Smith] will be gunning for me tomorrow and the same goes for the rest of the field. I just need to focus.

“All weekend I’ve talked about being greedy and I feel that’s exactly how you have to feel,” Sampey said. “I remind myself that it’s okay to want it all. Qualifying No. 1 is great, but I want to win the race so I’m going to give it all I have.”

Sampey will have a shot to take over the points lead since she has a possible quarterfinal match against current leader Joey Gladstone, who finished in the No. 8 position and races Karen Stoffer in round one. For the most part, the field was set on Saturday night as Sunday’s conditions did not allow for much shuffling within the qualifying order. One rider who did improve on Q5 was Hector Arana Jr., who rode his Buell V-twin to a 6.873, bettering his earlier 6.884. Arana Jr will take on Marc Ingwersen in Monday’s opening round.

Matt Smith finished second in qualifying with a 6.800 best and he also made the quickest run of the final session with a 6.82 at over 200 so he’s got to be considered a big threat to win his third Indy title. Smith will race his teammate Scotty Pollacheck in round one while Sampey’s teammate, Eddie Krawiec, will look to defend his Indy title from the No. 3 position and will race Jianna Evaristo in Monday’s opening round.”