Five things we learned at the NHRA Nevada Nationals

To be quite honest we learned many things in Las Vegas so it was a difficult proposition to narrow them down to just five key moments, but we’ve managed to do just that. Here are the five most important things we’re taking from an incredible NHRA Nevada Nationals in Las Vegas
31 Oct 2022
Kevin McKenna, NHRA National Dragster Senior Editor
Feature

To be quite honest we learned many things in Las Vegas so it was a difficult proposition to narrow them down to just five key moments, but we’ve managed to do just that. Here are the five most important things we’re taking from an incredible NHRA Nevada Nationals in Las Vegas 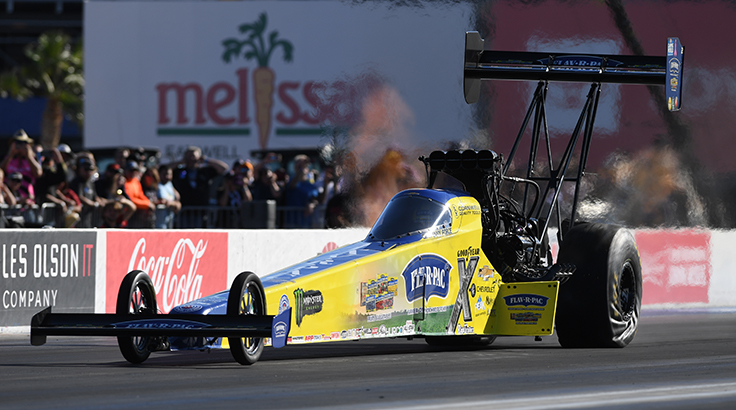 After Justin Ashley won the most recent event in Dallas, it might have seemed like Brittany Force’s chances to win another Top Fuel title were dwindling but no one seemed to mention that to the Monster team. In what may have been her most impressive performance of the season, Force not only vaulted back into title contention, but will head to her home race in Pomona as the points leader after scoring her fifth win of the season.

Force admittedly got some help when Ashley was ambushed in round one by Clay Millican, but it was still up to Force and her crew chief David Grubnic to capitalize on the opportunity. They did just that with a nearly flawless qualifying performance followed by four impressive wins on race day.

This time, what happened in Vegas isn’t going to stay in Vegas as the Nevada Nationals set the stage for what promises to be a thrilling conclusion to the season. There are just seven points separating Force and Ashley heading into Pomona and Mike Salinas is also lurking, just 66 back while Antron Brown and Steve Torrence have outside shots which means NHRA fans will be getting an early Christmas gift in Pomona.

IT’S NOT OVER UNTIL MATT HAGAN SAYS IT’S OVER 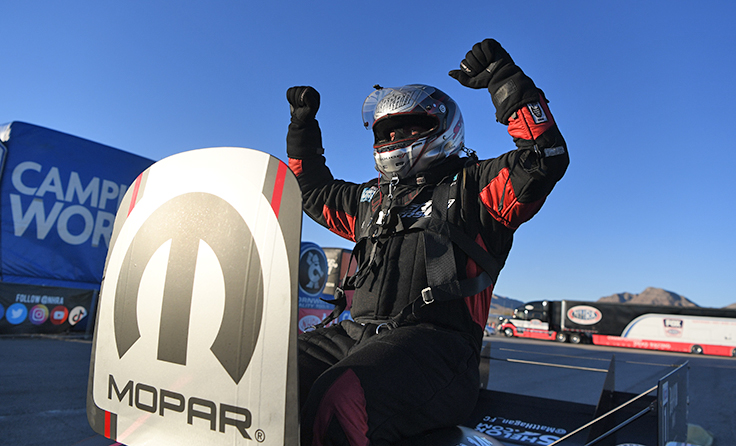 You remember Matt Hagan, right? This is the guy who won three of the first eight events held this season and led the points standings up until Bristol.

Well, Hagan hadn’t won a race since Epping in June and more recently, it seemed as though his chances to catch either Ron Capps or Robert Hight were growing short but that’s no long the case after a clutch victory in Las Vegas. Hagan went to the semifinals in the first three Countdown events and then went to the final in Dallas. He finished the job in Las Vegas, taking out Hight in a crucial final round.

On the same weekend where his team owner Tony Stewart made a smashing debut in the top Alcohol Dragster class, Hagan jumped  back into the race, although both he can Capps have their work cut out for them. Hight will take the points lead into Pomona with reigning champ Capps 61 points back while Hagan faces a 63 point deficit. With the additional points-and-a-half available at the Auto Club NHRA Finals, the race is far from over. If either Capps or Hagan can somehow gain ground in qualifying, they can get within two rounds of Hight.

TONY STEWART REALLY CAN DRIVE ANYTHING 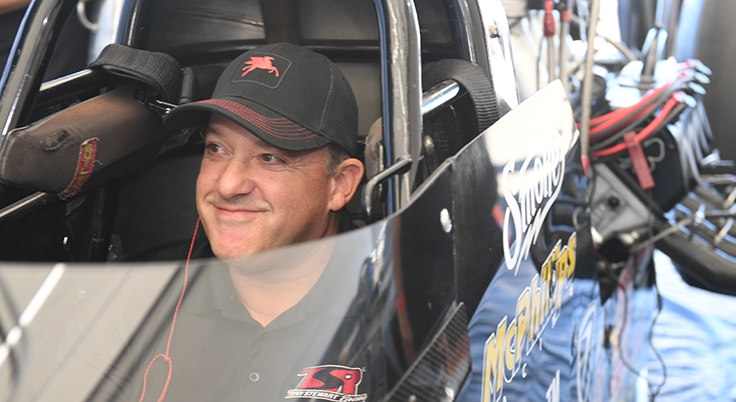 Speaking of Tony Stewart how impressive was his NHRA Top Alcohol Dragster debut? Okay, this isn’t really a new development because Tony Stewart was already regarded as one of auto racing’s all-time greats long before he set foot on a drag strip but his performance behind the wheel of the McPhillips family injected nitro dragster was some next level stuff. By his own count, Stewart has driven 25 different race cars in his career, but nothing he’d done previously prepared him for a 275-mph Top Alcohol Dragster.

Despite his lack of experience, Stewart, hit the ground running with a 5.21 to qualify No. 2 in what became one of the quickest fields ever assembled.  His lights were consistent, and he made no noticeable mistakes as he cruised through the first three rounds of eliminations.

Yes, Stewart lost the final round by a scant .0002-second to up-and-coming star Madison Payne, but his performance in a previously unfamiliar race car is nothing short of extraordinary. There was never really any doubt about this, but for those wondering, he’ll be back. It’s just a matter of making a schedule that fits with his various other commitments. 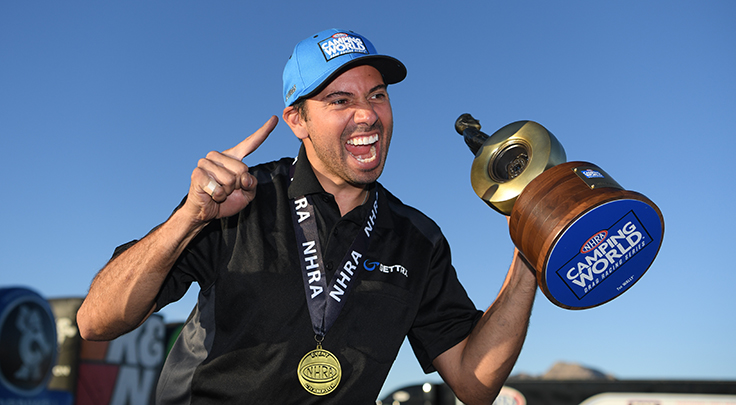 We learned this again when Hector Arana Jr. and his father showed up in Dallas and won that race, but a second win in Las Vegas only reinforces the notion that the Pro Stock Motorcycle class is better when the Arana family shows up.

Due to funding issues, Arana Jr. has competed in just six races this season but he’s won two of them and has scored 11 round wins, which means he’d have easily made it into the Countdown to the Championship if he’d gone to even half of the events.

The Arana team did pick up some funding from Steve Bryson and his GETTRX company, and that will get them to the final event of the season in Pomona. From there, who knows? Hopefully, that relationship carries into the 2023 season because the Arana family Buell is too competitive to remain parked. 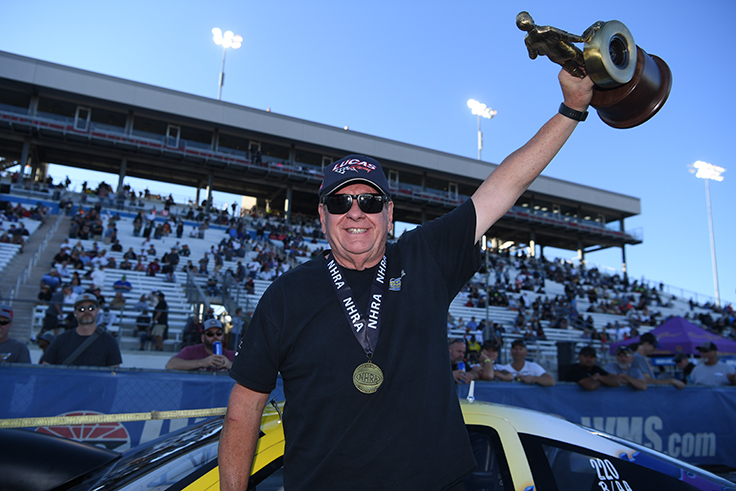 Everywhere one looked in Las Vegas, there was drama and excitement making it easily one of the best races of the season. That drama includes the Lucas Oil Drag Racing Series, where NHRA’s best sportsman racers put on a heck of a show.

Tony Stewart made a lot of headlines with his TAD debut, but there were other highlights that can’t be overlooked. For example, Sportsman standout and engine builder Jeff Taylor finally got his coveted 50th national event win when he scored the title in Comp. Taylor was sitting on 48 wins when his older brother, Charlie, passed away a couple of years ago. Charlie’s wish was to see Jeff hit the half-century mark and he did so when he wheeled Jim and Annie Whiteley’s entry past a tough field. Taylor has four world championships to his credit, and he’s won in Comp, Super Stock, Stock, and Super Comp, making him one of NHRA’s most versatile drivers. A 50th win puts him into an elite group.

And then there is Doug Gordon, who has bounced back from a harrowing accident in Brainerd to rejoin the battle for the Top Alcohol Funny Car title. Gordon quickly got back on track after Brainerd thanks to chassis builder Jonnie Lindberg and he found the winner’s circle in Las Vegas with a solid 5.4-second performance. He can still win the championship with a solid performance at the last two events.

He’s not out of the woods yet, but Greg Stanfield is looking good as he pursues a sixth world title in Super Stock. The reigning champ needed a big outing in Las Vegas and got it with a runner-up finish to Tyler Wudarczyk. Stanfield’s toughest battle came when he raced incoming leader Pete D’Agnolo in the middle rounds and he emerged with a victory, taking the top spot into the final two events of the season.