As if driving a seven second doorslammer on a nine-inch tire isn’t challenging enough, competitors in the Constant Aviation Factory Stock Showdown will have an added wrinkle during this weekend’s Circle K NHRA Four Wide Nationals when they participate in their four-wide eliminations.

NHRA pro racers have been racing four wide for more than a decade, but it’s a new experience for Factory Stock competitors. In fact, the only driver in the field who is familiar with the four wide format is defending class champion Aaron Stanfield, who also races in Pro Stock. Stanfield, who had a surprisingly early first-round exit at the season opening Gatornationals driving his Janac Bros. COPO Camaro, welcomes the four-wide challenge. Naturally, he figures he’s got an edge over the competition due to his time in Pro-Stock.

“I am looking forward to racing four-wide in Factory Stock. I have done it in Pro Stock, so I feel comfortable,” said Stanfield who qualified No. 1 and made it to the second round of eliminations in Pro Stock at the NHRA Four-Wide Nationals at the Strip at Las Vegas Motor Speedway. “You still have to pay attention since there is a lot going on at the starting line. It will be cool to see us all line up and take off for sure.” 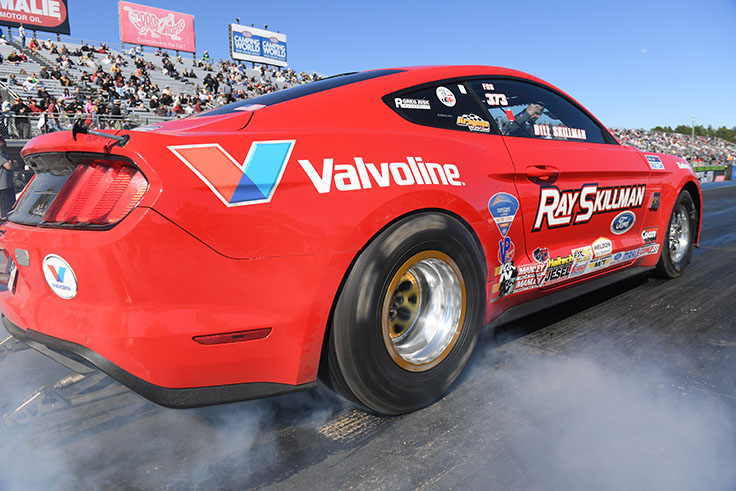 Bill Skillman has never raced in a four wide event, but his son, Drew, did so several times in Pro Stock so Bill didn’t have to go far to get advice.

“I did talk to Drew a few times and he had a lot of good advice for me,” said Skillman. “A lot of it has to do with staging. Do you just up up there and dive right in or do you wait a bit? My personal tendency is to stage last, but with three other cars, that might be easier said than done. When Drew ran Pro Stock he taped up his visor so he wouldn’t be distracted. That’s not a bad idea at all especially in this format.” 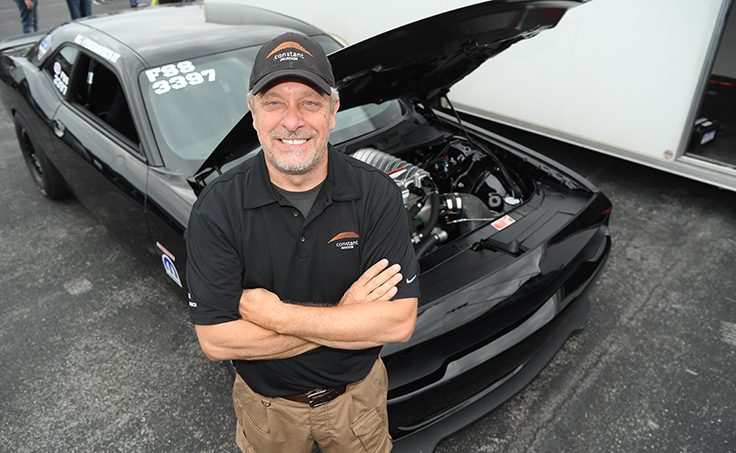 Constant Aviation’s Dave Davies is another Factory Stock driver who is in favor of the four wide format although he is quick to admit that it’s going to be an adjustment. Davis has been active in the class for less than two seasons, but he’s made steady progress.

“I can’t confirm or deny that I had something to do with this [four wide format],” Davies said with a wink. “Actually, it was something I suggested and everyone seemed to be in favor of it. I know some people might not be comfortable, but I’m more than willing to give it a try.”

Davies has spent time studying the Christmas Tree starting line system used at the Four Wide Nationals and he participated in a quick starting line seminar on Thursday night.

“I also spent some time in the Top Fuel pits talking to Leah [Pruett] and she was very helpful,” said Davies, who recently debuted a new sponsor, Save our Allies, on his Dodge Drag Pak Challenger. “Personally, I think it’s good for the class. I lost in Gainesville because I missed the Tree so I’m anxious to make up for that.”

Finally, there is former class champion David Barton, who has won races in Factory Stock, Super Stock, and the Dodge Hemi Challenge. Barton even won the Comp title at last year’s Charlotte Four Wide race but he admits that racing against three other opponents is going to be an entirely new experience.

“I’m super excited about the whole thing,” Barton said. “We wanted to do this two years ago, but the whole race didn’t happen because of Covid. I think it’s a good way to spice things up a little. Right now, I think the Dodges and the Fords have a distinct advantage over the Chevy teams so this might be a way to help equalize things.”

Barton also spent time analyzing the starting line routine used for four wide races. He’s determined not to be the guy who gets hung out to dry because he didn’t get staged in time.”

“You just have to be careful not to get caught up in the moment,” Barton said. “The trick is to not wait too long and get timed out. We’ve seen that happen a lot with the other classes so I looks like something you have to watch pretty carefully. I’m thinking the first couple of qualifying runs might be messy but then everyone should calm down a bit and get used to it.”