Everyone loves an underdog: Here's a list of five great Top Fuel upsets

Upsets are a part of nitro drag racing, and we almost had a couple of them at the Circle K NHRA Four-Wide Nationals. With that in mind, here's a list of five big Top Fuel upsets in NHRA history.
06 May 2022
Phil Burgess, NHRA National Dragster Editor
DRAGSTER Insider 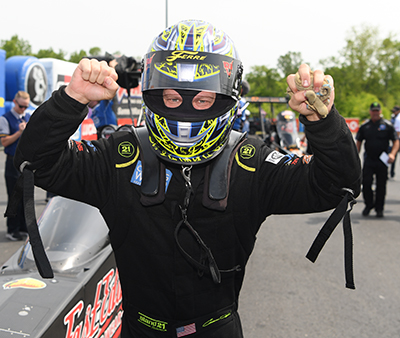 Everyone loves an underdog, and last weekend’s Circle K NHRA Four-Wide Nationals in Charlotte almost provided us with a couple of those Every Underdog Has its Day kind of stories, as Mike McIntire Jr. in Funny Car and Cameron Ferré in Top Fuel both reached the final round and nearly pulled off what would have been huge upsets.

Watching that unfold got me thinking about other big upsets and mentally composing a Top 5 list in my head of the biggest final-round nitro upsets in both nitro classes.

The NHRA record books are filled with dozens of nitro racers who have only won one national event, but many were wins that could hardly be considered as upsets. I think of guys like Carl Olson and Herm Petersen in Top Fuel and Pat Foster and Shirl Greer in Funny Car, all guys who had immensely successful careers but, due to bad luck or whatever, only have one national event Wally on their shelves, and at the time they won, they were hardly long shots. Even when I look at Tripp Tatum, who won Top Fuel at the Amalie Motor Oil NHRA Gatornationals earlier this year, even though it was his first win, it didn’t seem like much of an upset, given the pedigree of his Torrence Racing-influenced car, or even Josh Hart the year before, because he had proven himself a capable winner in Top Alcohol Dragster.

Also, I tried to consider what happened after that first win. When Gary Beck won Top Fuel in his 1972 Indy debut, it was a shocker, but we all know that was just the beginning of his ride, so, in that context, maybe it was just foreshadowing. Strength of opponents also weighed into my reckoning.

So, with those caveats in mind, here’s my list of Top 5 Upsets in Top Fuel, ranked chronologically. I’ll tackle the Funny Car list next week. 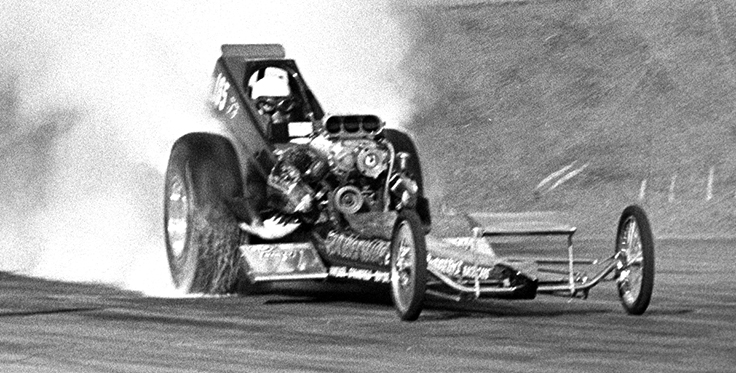 As we all know, Marshall’s victory was the last ever by a front-engined dragster in NHRA national event competition, but it goes deeper than that. Marshall was just 23 when he and partner Don Young purchased the ex-Don Prudhomme “slab-sided” front-engine dragster. Their previous car ran 7.0s at a time when guys like Don Garlits were running 6.30s and 6.30s. To say they were underfunded is like saying a rock is hard. They based the car out of the single-car garage at his parents’ house in Springfield, N.J., and had one engine and a handful of spare pistons that they’d salvaged from Roland Leong’s garbage pile. 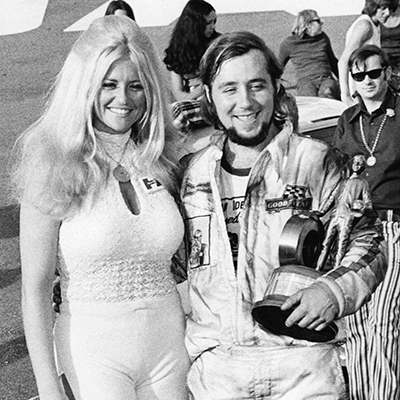 By the time they arrived at Sanair Dragstrip, all of the wins so far that year had gone to the back-motored machines of Olson, Garlits, Chip Woodall, and Jeb Allen, and the slingshot was clearly well down the road to obsolescence. The fact that they fireballed the engine and ate up all their spares on their lone qualifying pass didn’t bode well for race day.

But, incredibly, both national record holder Clayton Harris and Winternationals champ Olson red-lighted against him, and Summernationals champ Allen’s overheated mount spit an o-ring gasket in the final and puked water under the rear tires, causing him to go up in smoke.

Why did Harris and Olson foul? Why did Allen’s engine overheat? There’s A LOT more to this tale that you can dive into in this 2011 column I wrote about the win. 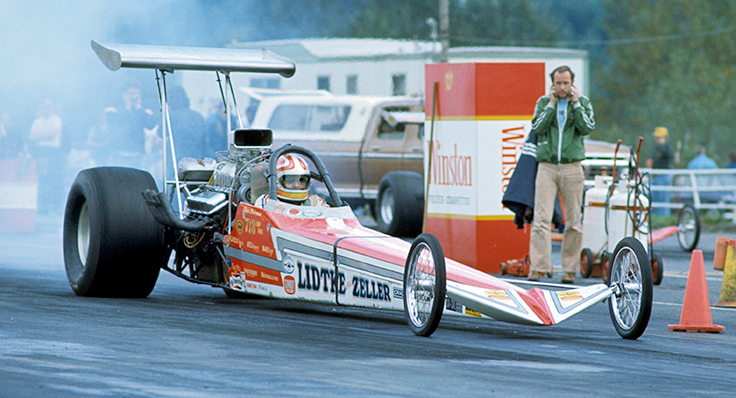 Like Roland Leong and Danny Ongais, Shiroma was another Hawaiian import who eventually made it big on the mainland. The Honolulu-born racer was a championship-winning circle-track racer until Honolulu Stadium closed in 1963 and Shiroma began drag racing, moving to Seal Beach., Calif., in 1967, where he raced a few years with his first partners then moved about, including a stint in Leong’s Top Fueler. He moved into Funny Car in the Midnight Skulker in 1971 and enjoyed some local success, then teamed with Ray Zeller and Dwayne Lidtke on a Rodeck-powered Top Fuel car. They qualified on the bump spot of the first all-five-second field (1975 World Finals).

Shiroma’s big moment came at the 1977 Fallnationals at Seattle Int’l Raceway, where Shiroma not only scored his first and only win but also the last Top Fuel win for a Chevy-based engine.

Shiroma opened eliminations by upsetting No. 2 qualifier Frank Bradley, who shook the tires, then eked past West Coast powerhouse James Warren and Northwest favorite Erie Hall to reach the final to take on Rance McDaniel.

McDaniel had recently clinched the Division 7 championship with his Rodeck-powered "Valley Fever" and had reached the semi's at the U.S. Nationals, but was unable to fire and Shiroma soloed for the victory.

I might get some argument on the upset nature of this one as Lee had already won the March Meet earlier in 1982, defeating Shirley Muldowney in the final, but I don’t know that a lot of people saw a national event win coming so quickly for the former secretary turned Top Fuel racer, who a year earlier had never even sat in a Top Fueler. 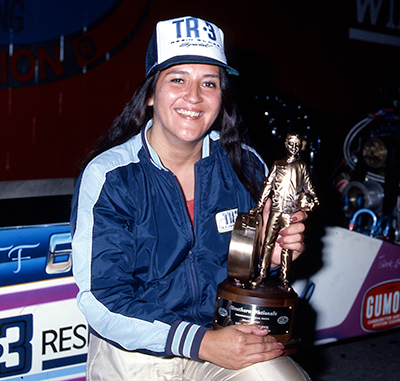 Although owner/tuner Marc Danekas had been able to coax some solid numbers from the TR-3 car, a lot of things fell her way. First, it was just an eight-car field, and even though she qualified No. 2 behind her teammate, Steve Hodkinson, both got breaks en route to the final. Lee defeated Jody Smart in round one and then got a bye run when Dwight Salisbury was unable to make the semifinal call. Hodkinson got past tire-smoking Gary Beck and wheelstanding Connie Kalitta to reach the final.

There’s been a lot of conjecture over the years about what happened in the final round, as Hodkinson’s engine went silent after the burnout. Was this really breakage or were team orders in place to ensure that Lee got the headlines that could catapult her, unarguably the more marketable of the pair, on to bigger things? Lee passed away in 2003, and Danekas is also gone, so we may never know. What we do know is that she became just the second female racer to win in NHRA Top Fuel competition, behind, of course, Muldowney. (To date there have now been nine; in order: Muldowney, Lee, Lori Johns, Shelly Payne Anderson, Cristen Powell, Melanie Troxel, Hillary Will, Leah Pruett, and Brittany Force.)

On the plus side, Lee did impress again, reaching the final round of the Springnationals that year, where Muldowney got her March Meet revenge.

It’s one thing for a hero from another sport to try out drag racing, but quite another for them to be successful. Pastorini’s win on the Monday of the rain-delayed 1986 Southern Nationals was as unexpected for that as anything else, as the former NFL quarterback had shown flashes of brilliance in his short career, reaching the semifinals of the Gatornationals earlier that year, where his fine 5.49 lost to Don Garlits' 270-mph-breaking 5.42 in what was the quickest side-by-side race in history.

Pastorini’s road from the huddle to the cockpit was long in coming. As early as 1980, he was crewing on Raymond Beadle’s Blue Max Funny Car and making a deal to buy the Max Top Fueler (driven previously by Dave Settles), but none of that came to fruition. In 1985, he and crew chief Bobby Rowe (yes, the great former Funny Car racer) bought the national-speed-record-setting Dago Red Top Fueler from Frank Taylor but found the cockpit too small, so he sold it to Eddie Hill, who famously made his comeback to the sport in that car the following year. He bought the ex-Kilpatrick & Connell dragster — driven to victory at the 1983 Springnationals by Richard Tharp — from Gene Snow, and went racing in 1985, with the talented Donnie Couch added on wrenches, but didn’t win a round until the 1986 Gatornationals. 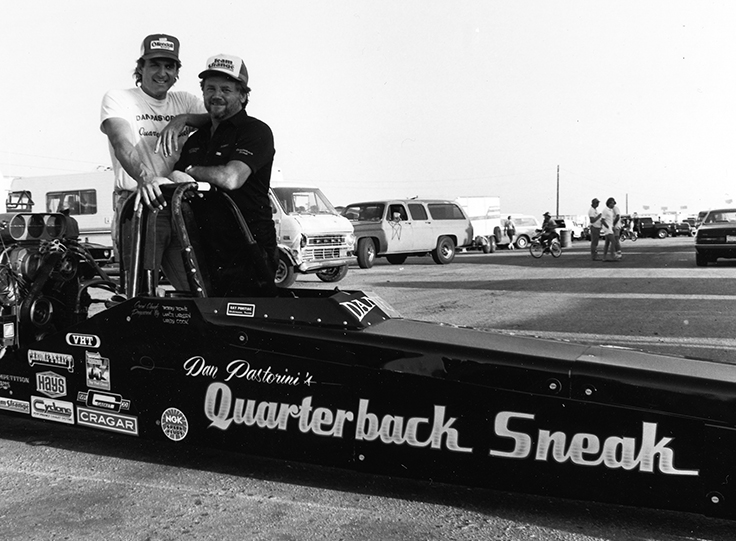 After qualifying just eighth, a tenth and a half behind polesitter Joe Amato, Pastorini got a first-round bye after Jack Revelle's dragster hurt the transmission (remember, this was before high-gear-only), then skillfully pedaled his way to victories over Dick LaHaie and Bill Mullins on a traction-plagued quarter-mile and, in the Monday final, Gene Snow.

The funniest story from the weekend was some crossed signals between the quarterback and his coach, Couch. On his 5.67 qualifying run of record, the engine began to smoke after the burnout due to a dodge piston that the low-on-parts team had to run.

Fearing potential carnage on a full pass, Couch stepped in front of Pastorini and made the universal, crossed-hands sign for half-pass to his driver, fearing detonation. To his shock, like a receiver running a bad route, Pastorini went long on a full pass. When Couch got down to the top end, Pastorini reportedly got out of the car and asked, "By the way, what does this mean?" duplicating the gesture.

Pastorini retired from competition after the following season.

Had it not been for some guy named Gary Scelzi winning the championship in his first season in Top Fuel after replacing the late Blaine Johnson, Cristen Powell, daughter of 1970s Funny Car racer Casey Powell, could very well have been your 1997 rookie of the year.

The 18-year-old, who had showcased her skills in Top Alcohol Dragster at age 16 when she set the national record — and had been a national champion dressage horse rider at age 13 — surprised everyone by winning the Summernationals in just her seventh start, drawing immediate comparisons to Jeb Allen, who also won the Summenationals when he was 18 way 25 years earlier.

Powell, who missed her high-school prom to attend the event, qualified her Mike Kloeber-tuned machine just No. 15, but came to life on Sunday, beating reigning world champion Kenny Bernstein, perennial championship challenger Cory McClenathan, and soon-to-be world champ Scelzi in the first three rounds, then took down Bruce Sarver in the final. 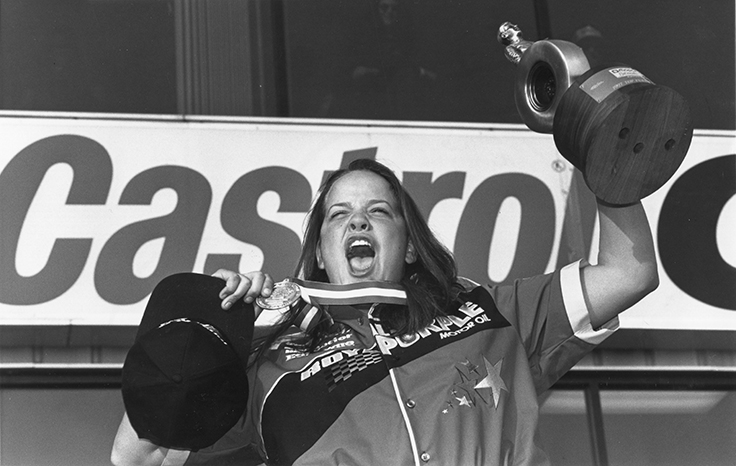 Although she landed a Reebok sponsorship at year’s end and benefitted from Royal Purple help during the season, she only ran 14 of the 22 events and finished 14th in points.

Powell never won again and later raced in Funny Car, but received high praise from Kloeber after her E-Town win.

“Who do you know who drove like this as a rookie?” he asked. “She’s as good as [Tommy Johnson] Jr. ever was on his best day, and I rate him as one of the best Top Fuel drivers out there. She’s as good as he is.”

OK, that’s my Top 5 for Top Fuel upsets. Your mileage may vary, and if so, I’d love to see your list or any addition to mine. I’ll have a Funny Car Top 5 sometime next week.