A dominant, magical season has the chance to become a championship year for Erica Enders at this weekend’s NHRA Nevada Nationals, which shows just how incredible the Pro Stock star has been during the 2022 NHRA Camping World Drag Racing Series season.
28 Oct 2022
Posted by NHRA.com staff
Feature

A dominant, magical season has the chance to become a championship year for Erica Enders at this weekend’s 22nd NHRA Nevada Nationals at The Strip at Las Vegas Motor Speedway, which also shows just how incredible the Pro Stock star has been during the 2022 NHRA Camping World Drag Racing Series season.

With another strong showing – which has become the norm for her over the years in Las Vegas – Enders would clinch her fifth world title a race before the finale, a clear indicator she has been nearly unstoppable in her Melling Performance/Elite Motorsports Chevrolet Camaro.

Enders has picked up nine wins this year, tying her career-best for a single season, with two races remaining, and she currently holds a 165-point lead over teammate Aaron Stanfield. She also won the spring race in Las Vegas and has a chance to pick up her 10th career victory at The Strip at Las Vegas Motor Speedway, which would extend her mark as the winningest Professional driver in track history.

It all adds up to a remarkable weekend of opportunity for Enders, and she’s eager to try to take advantage and close the deal in impressive fashion. 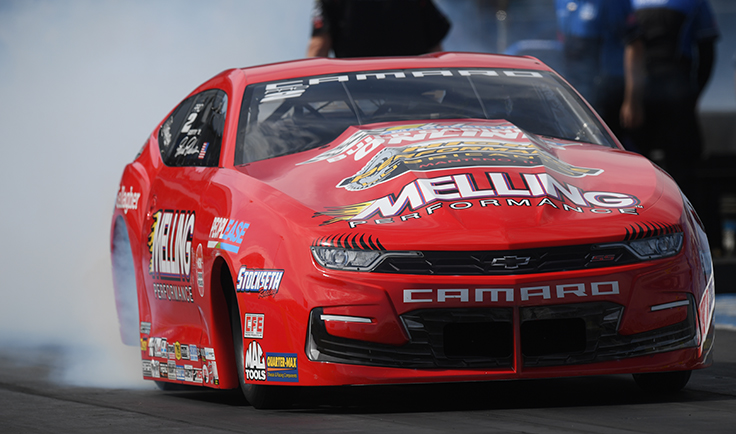 “I’ve definitely always been big on the positive mental attitude part of it, speaking things that you want into existence and visualizing the positive things you want,” said Enders, who now has 42 career wins. “The guys at Elite Motorsports have my back, and it’s a pretty awesome environment to work in. It’s a whole lot of fun, and I want to go to Vegas and capitalize there. It would be awesome to lock it up. I don’t want to let up, and I just want to keep going to battle.”

Enders has been a step ahead of a loaded Pro Stock class all year, both in the regular season and especially during the Countdown to the Championship. She’s already won three of the four playoff races and was nearly perfect at the most recent race in Dallas, recording the quickest run of every qualifying session and every round of eliminations.

She’s continued to praise the work of her Elite Motorsports team, which has matched her step for step in terms of performance during this outstanding year. But Enders knows there’s still work to be done in Las Vegas, especially going against the likes of defending world champ Greg Anderson, Stanfield, Dallas Glenn, Kyle Koretsky, rookie Camrie Caruso, and Troy Coughlin Jr. There's also major goals remaining for Enders, and there’s not many places where she’s been better than Las Vegas.

“This season has definitely been a dream come true,” Enders said. “We’re headed to Vegas, and that track has always been a hugely successful one for us. We’ve won nine races there, and we’re hopeful we can try to get a 10th [this weekend]. A personal goal coming into the year was to beat the most wins I’ve had in a season. We had nine in 2015 and [the win in Dallas] gave us nine, so we’ve got two races remaining to try and accomplish that goal. It’s just been a tremendous season.”