The competition in Pro Stock Motorcycle has become progressively stronger, not just this year, but over the last handful. The class demands constant research and development along with very precise application — all things that greatly interest six-time NHRA champion Andrew Hines. A strategic partnership between Vance & Hines and Suzuki gave the 56-time national event winner the opportunity to dive deeper into the off-the-bike side of things this year, and in the role of crew chief, he's overseen a pair of veteran riders as they've reached final rounds and claimed low qualifier awards.

The Vance & Hines team has had an eventful first season together with this new dynamic, but with two events remaining in the 2022 NHRA Camping World Drag Racing Series Countdown to the Championship, it will be no easy task to finish at — or even near — the top.

"The competition has been tough for the last four or five years," said Hines. "It's progressed the last few years, getting better and better, and this year is no different. You go into first round, and it's like a semifinal or a final. The class is stacked up tight, and it makes for a very interesting Sunday."

When Hines took on the role of full-time crew chief, he was settling into a position for which he was well-armed. No longer riding, his task was to solely focus on tuning a pair of former champions: Hines is the primary crew chief on the Mission Foods Vance & Hines Suzuki commandeered by three-time Pro Stock Motorcycle champion Angelle Sampey, who joined the team in 2019, and the co-crew chief on the team's Suzuki Hayabusa ridden by four-time champ Eddie Krawiec. 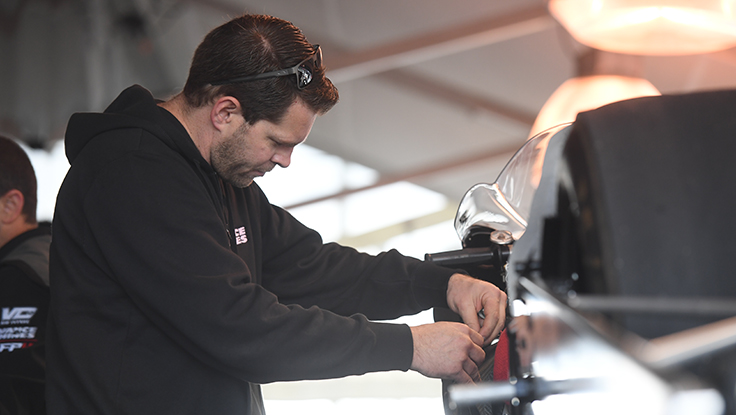 So far this season, Sampey has claimed a win at Summit Motorsports Park in Norwalk and was runner-up at Bristol Dragway. She earned No. 1 qualifier honors at the spring race in Charlotte, Bristol, Sonoma, Indianapolis, and last weekend in Dallas. Sampey led the points for one race after Sonoma. Never one to be taken lightly, Krawiec has hovered mid-pack most of the year and was runner-up in Topeka and Sonoma. He was the No. 1 qualifier in Norwalk, and four times this year, it was either Krawiec (Norwalk) or Sampey (Sonoma, Indy, and Dallas) with low elapsed time of the event.

It hasn't been the dominating season that they had hoped for, though. Krawiec suffered a handful of early losses and a couple of tough days in qualifying. Sampey, who really began to stand out as a top contender in the summer months, has struggled with consistency in the Countdown.

For an analytical person like Hines, a man whose mental wheels never stop turning, the shift in jurisdiction has been a challenge.

"Early in my career, my racing was up and down with red-lights and holeshots, but the last decade, I flipped that switch to where I could win rounds for the team when the bike wasn't there," said Hines. "I won a lot of races that way throughout my career. I don't have that with tuning it; I don't have the aspect of feeling the g-force and knowing what the bike is doing. Is it trying to quiver the tire here, trying to unload? Is it carrying the front end too far down the racetrack? I'm riding Angelle's bike from the starting line in some ways. She can give me some feedback, but it's different standing on the starting line. I can't control the complete destiny by [also] tuning myself from the starting line to the finish line."

Heading into the NHRA Nevada Nationals in Las Vegas and then the NHRA Finals — which will follow the points-and-a-half format — Krawiec is No. 6 in the Pro Stock Motorcycle standings, 140 points back from first. Sampey is No. 7, 164 marks out of No. 1. Hines acknowledges that it's a sizable battle but one that he and the riders don't face alone. The Vance & Hines crew has been steady and reliable with truck driver and mechanic Ray Veirs on board for nearly two decades; Scott Sceurman managing crankshafts, welds, and chassis building since the days of three-time champion (and big brother to Andrew) Matt Hines; and all-around handyman and brother to Jay Krawiec.

"We've had a very cohesive group for a long time," emphasized Hines. "Everybody works hard; we all grind, nobody slacks, everybody picks up what we can do for each other. It's been really, really fantastic. It's a great group, and that's what's led to our history. Everybody knows their job, and we all want to go there and fight for it every race."

Hines comes by his deep interest and involvement in the engineering side of the program naturally. He's long been interested in the science of the class and, most recently, was integral in the design and development of a new Suzuki Hayabusa body suitable for riders like himself, who are taller than the traditional jockey-statured Pro Stock Motorcycle racers. But the urge to ride does still reside. 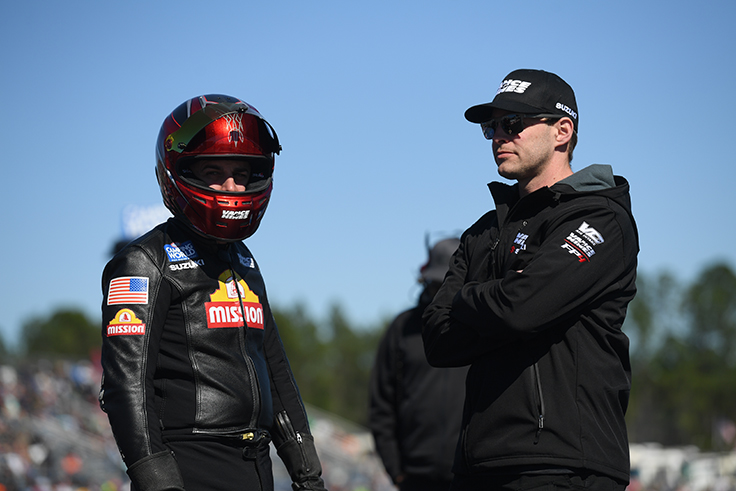 "We're planning for a very long test session in Florida in January," said Hines, who also noted that the Vance & Hines team has new billet engine cases in the works. "That's probably a good time for me to throw a leg over the bike, since I was part of the development [of the new Hayabusa].

"My license is still current until September of next year, and I've been wanting to ride one of these Suzukis that we've had here for a year and a half. The first thing I rode was a Suzuki, and my style hasn't had to adapt much. I watched my brother make 2,000 runs, started watching my dad [Byron Hines] go to races in the mid-80s. I watched the class and was a historian of it for 15 years before I started racing. I still feel like I could do it."

Although the draw is still plainly there, Hines isn't exceptionally interested in a full-time gig back on the bike.

"I got a taste of not being on the bike the first two races last season, and it wasn't completely terrible," said Hines. "Last year, I ran 200 mph on my bike, knocked down my personal career-best speeds, won some rounds, and almost got a win there in Sonoma but ended up five-thou' away from the stripe. I was happy with all of that. I don't think I'll ever chase a championship again, but if I could go out and just run some races here and there, help fill a field, and ruin some days for old rivals, that would be great.

"Right now, we're just focused on these last two races. I don't want this year to be over so soon, because I feel like there are more wins that need to happen for our team. We can definitely use an offseason to regroup and reset — it's been a long grind all year being away from family, 140 days on the road, thrashing with late nights and early mornings. But we're not done yet. We've got two races left to go turn it on."