Two months ago, Greg Anderson likely wouldn’t have considered himself much of a threat to defend his world championship but has vaulted back into title contention as the Countdown to the Championship playoffs open.
16 Sep 2022
Posted by NHRA.com staff
Feature

Two months ago, Greg Anderson likely wouldn’t have considered himself much of a threat to defend his world championship in the NHRA Camping World Drag Racing Series. But the longtime star has made a swift turnaround in recent weeks, vaulting back into title contention as the Countdown to the Championship playoffs open this weekend at the 37th annual Pep Boys NHRA Nationals at Maple Grove Raceway.

Anderson, a five-time world champ in Pro Stock, picked up his 100th victory at the most recent race in Indy, continuing a recent hot streak that has included three straight No. 1 qualifiers in his HendrickCars.com Chevrolet Camaro as well as final-round appearances in three of the past four races.

Points leader Erica Enders remains the favorite in the class thanks to a dominant season that’s included six victories and eight final rounds, but Anderson is coming on strong, and he can’t wait for the six-race playoffs to begin this weekend in Reading. 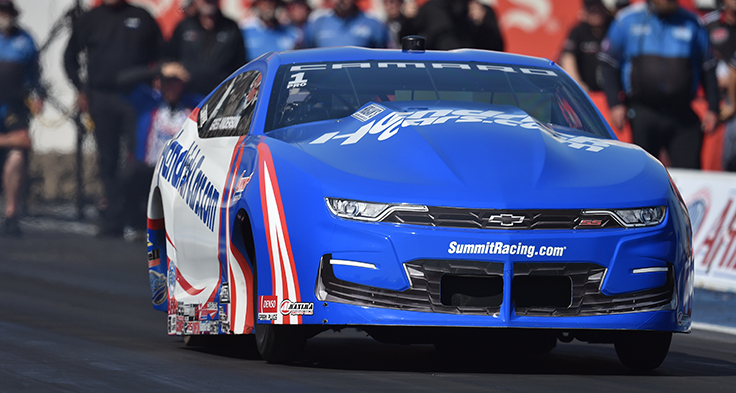 “Everybody worries me in this class, but the bigger news is we should be worrying them right now,” said Anderson, who will open the playoffs in third. “We were not a worry to them two months ago, and we were an afterthought and not even a concern to [Elite Motorsports]. It was their year, it was Erica’s year, and deservedly so. They did a great job over the winter, and they made big gains. I’m very proud of the recovery we’ve made. As we’re shuffling the deck, they know we’re here, and we know they’re not going away. It’s going to be a dogfight.”

Billy Torrence (Top Fuel), Tommy Johnson Jr. (Funny Car), Anderson (Pro Stock), and Steve Johnson (Pro Stock Motorcycle) won last year’s race in Reading. This year’s playoff opener will be broadcast on both the FOX broadcast network and FOX Sports 1 (FS1) in 2022 and will also serve as the NFL adjacent broadcast on FOX, putting the NHRA on a huge platform to open its 2022 playoffs. It’s also the first of six playoff races, and Anderson will look to defend his event win at Maple Grove Raceway.

Last year, his victory put him in a tie with Warren Johnson for the most wins in Pro Stock history. He’s shot past that, and, in Indy, Anderson became only the second driver in NHRA Camping World Drag Racing Series history to reach 100 wins.

It was a long time coming for Anderson, who struggled during the early part of the season as Enders and Elite Motorsports racked up victories. They have 10 wins among Enders, Aaron Stanfield, who is second in points, and Troy Coughlin Jr., but Anderson and the KB Racing team, which also includes Gainesville winner Dallas Glenn, Kyle Koretsky, and Matt Hartford, are coming on strong. Anderson’s team has found power in recent weeks, but he knows the class is loaded with talent, and nothing is going to come easy in the Countdown to the Championship.

“Of your top 10 cars, I can’t really pick a favorite. It’s great for Pro Stock,” Anderson said. “But I’m so proud of my guys and the job they’ve done, and the recovery they’ve made this year. It’s a new fight, and it’s absolutely going to be an exciting playoff because of what everybody on this KB Racing team has done."