Dallas Glenn compared the lengthy Pro Stock break of more than five weeks to a second off-season. With that in mind, the reigning NHRA Rookie of the Year is more than ready to get back behind the wheel of his RAD Torque Systems Chevrolet Camaro at this weekend’s NHRA New England Nationals.
03 Jun 2022
Josh Hachat
Feature

Dallas Glenn compared the lengthy Pro Stock break of more than five weeks to a second off-season. With that in mind, the reigning NHRA Rookie of the Year is more than ready to get back behind the wheel of his RAD Torque Systems Chevrolet Camaro at this weekend’s NHRA New England Nationals at New England Dragway.

Glenn did some bracket racing in the time off, but his KB Racing team also put in plenty of work since the category last raced in late April in Houston. He hopes that translates to immediate results in what should be some ideal conditions on a fast track, but first and foremost, Glenn is simply thrilled to have Pro Stock back in action.

“It did feel like an eternity,” Glenn said. “We got caught up on a lot of little small little projects, but as far as getting back into the race cards we're dying to get back out here. Epping is always fun, and the crowd is really good here

“The weather it looks like it’s going to be really good this weekend, which is good and we're definitely excited to be back out here.”

In getting back into the groove, Glenn is confident he can continue to build on what’s been a solid start to his 2022 season. He won in Gainesville, but the last two races have left a sour taste in his mouth, solely because Glenn was left thinking what could have been.

He advanced to the final quad in Las Vegas and felt he was the favorite in that final before a random stroke of bad luck. That continued in Houston where a sensor randomly failed right before the first round of eliminations. 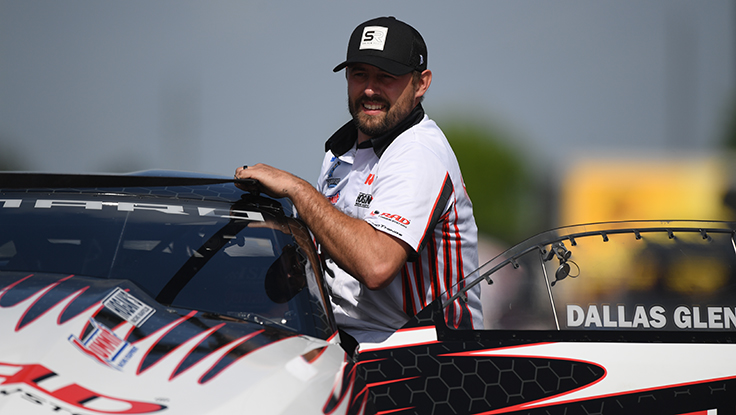 Those were bad enough memories, made even more frustrating is Glenn has had to wait nearly six weeks to erase them.

“I just feel like with my car, I've just been unlucky with certain things,” Glenn said. “I feel like we had the car to beat in the final Vegas and then a wire breaks. It felt like everything was lined up perfect there, we were the fastest car coming into it and I felt really good when I hit the tree, but the car died before I even got a beam.

“I go into Houston, and I feel like I've got another great car. I was hitting the tree well and I felt like the ladder was going to be a fun one that day and sensor dies. I just need the bad luck to stop.”
If it does, Glenn promises to be ready to pounce and he knows these next three races will be important for him in the loaded Pro Stock class. After the lengthy layoff, Pro Stock will race three times in the next four races starting in Epping, which will give an instant indication of who made the most improvements in the past month.

Glenn has a good feeling it can be his talented team, but it’s all about proving it on the track.

“I would think this next three-race swing, you'll be able to tell if anybody made any strides,” said Glenn, who is fourth in points behind Erica Enders, Aaron Stanfield, and teammate Kyle Koretsky. “Sometimes it takes a race or two, so within these these next three races, you'll tell who definitely put in the work.

“You kind of have to get your routine back, all those little details. It's like I have to remember how I do this on the first (qualifying run) and then go make a good, nice, clean run on this first run, shake the rust off and then hopefully the weather's going to be really nice for (Saturday).”