Doug Kalitta, who has never won a four-wide race, looks pretty racy in the Autodesk dragster. After making it down the track on all four qualifying passes, Kalitta won his first-round quad, finishing ahead of Mike Salinas, Alex Laughlin, and fireballing Doug Foley. 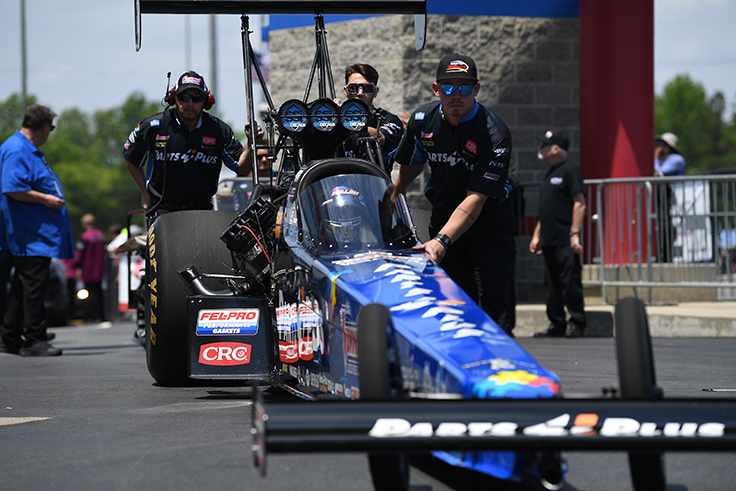 Steve Torrence’s four-year reign as the Charlotte four-wide winner ended in round one with a blower-banging third-place finish in his first-round quad. Clay Millican won the shootout, using an .021 light to win on a holeshot ahead of Josh Hart, 3.748 to 3/735. Shawn Langdon finished fourth. 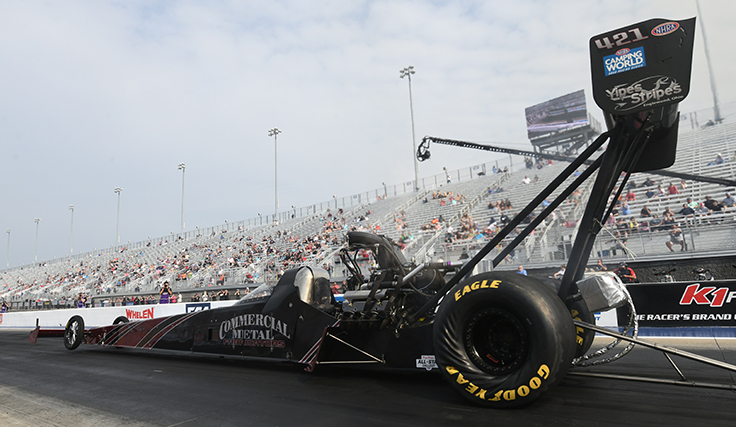 Spencer Massey, who won the Four-Wide Nationals back to back in 2012 and 2013, showed that he hasn’t lost the magic touch, winning his first-round quad in Pat Dakin’s car on a double holeshot, running 3.749 to finish ahead of the quicker machines of Brittany Force (3.732) and Leah Pruett (3.741). The win was a boon for points leader Force after second-place Steve Torrence failed to advance. 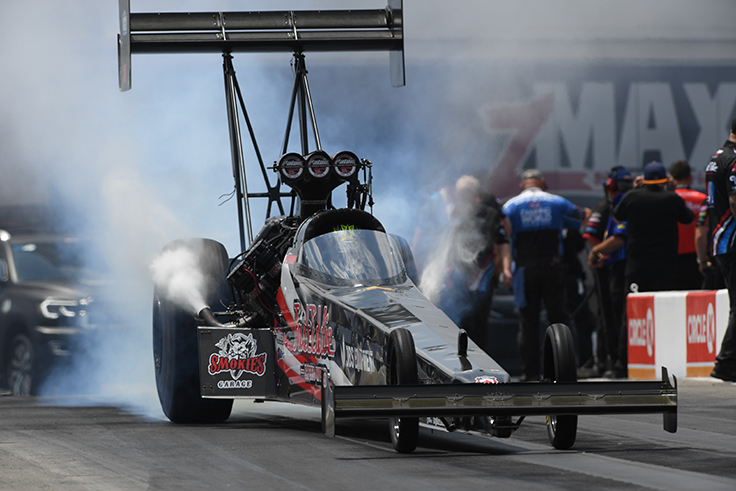 Cameron Ferre pulled off a sizable upset by finishing second in his first-round quad behind only low qualifier Justin Ashley. Ferre, running with the Canadian Paton Racing team, made it down the track on all three of his qualifying passes with 3.80-second passes and advanced here with a 3.841.

After a troubled qualifying outing in which the Auto Club Chevy made it down the track on only two of four runs, crew chief Jimmy Prock put away his new experimental tune-up Saturday night and the ship has definitely righted as Robert Hight, a two-time four-wide winner, won his first-round quad ahead of Cruz Pedregon, the 2018 four-wide champ, Tim Wilkerson, and Jim Campbell.

John Force, who broke the track speed record in qualifying with a pass of 334.24, bettered it in round one with a blast of 335.07 but didn’t win his quad, finishing second behind Bob Tasca III, 3.878 to 3.892. Alexis DeJoria finished third behind the pair. 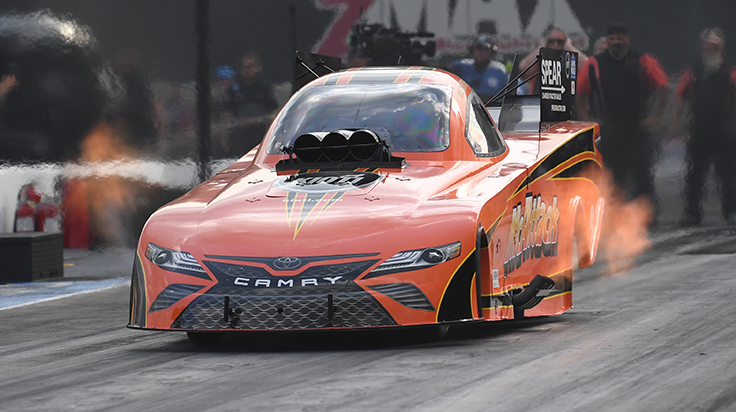 Mike McIntire Jr. pulled off the upset of the round, scoring just his second “round-win” (both coming at four-wide races) with a second-place finish behind Matt Hagan. and ahead of Paul Lee and Blake Alexander. The McIntire family has new backing this weekend from Spear/Kioti Tractor. 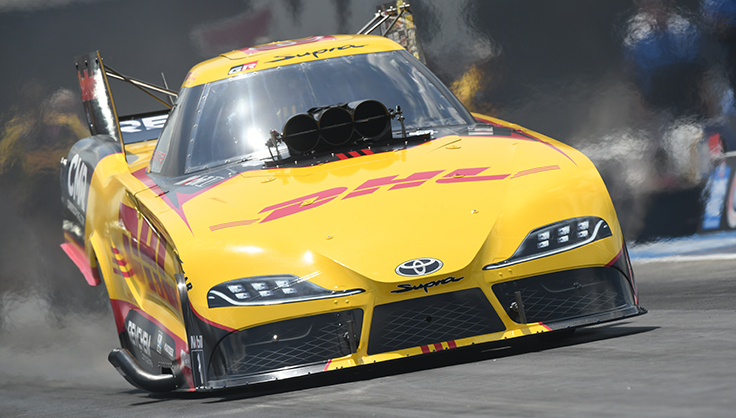 The twin Toyotas of J.R. Todd and Ron Capps advanced together into the semifinals with respective runs of 3.89 and 3.92, giving Capps his first win light in the Toyota GR Supra that made its debut here Friday. With both in the semifinals, it's a good chance for Toyota to get its first national event win with the swoopy new shell.

The top six points runners all advanced to the semifinals, joined by Tasca, who leapfrogged Alexis DeJoria and Chad Green into seventh place, and McIntyre. 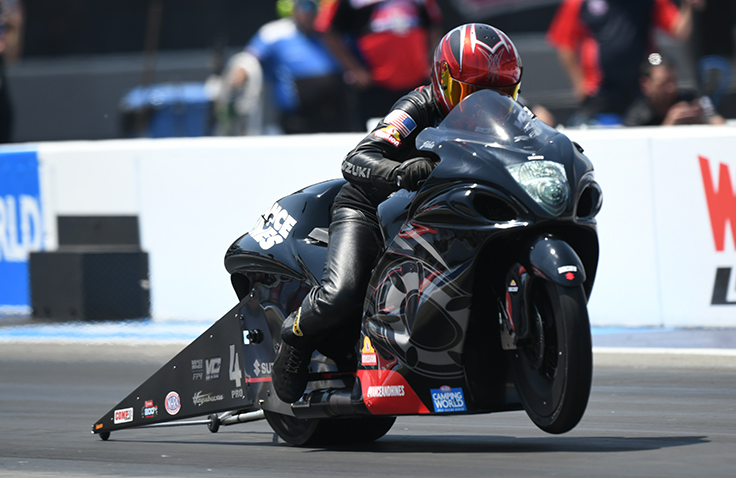 Michael Ray’s nearly perfect reaction time wasn’t enough to help him advance out of the first quad of Pro Stock Motorcycles. That honor went to Eddie Krawiec and Jerry Savoie, who qualified fourth and sixth respectively. Krawiec crossed the finish line first with a 6.796 on his Vance & Hines Suzuki while Savoie wasn’t far behind after a 6.804 on his white Alligator Suzuki. Ray’s 6.962 wasn’t enough to get through and the same could be said for Marc Ingwersen’s 6.936. 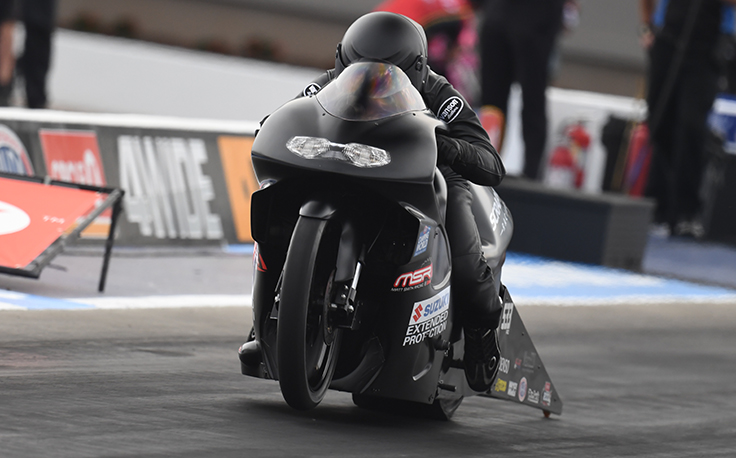 The second quad went pretty much as expected as Gainesville winner Karen Stoffer moved on following a 6.793 while Jimmy Underdahl continued his recent string of soldi performances with a 6.833 to move into the semifinals. Underdahl has yet to win a race, but he’s on the short list of NHRA pros who could become the next first-time winner. While Underdahl and Stoffer advanced, Ryan Oehler and Chris Bostick did not. 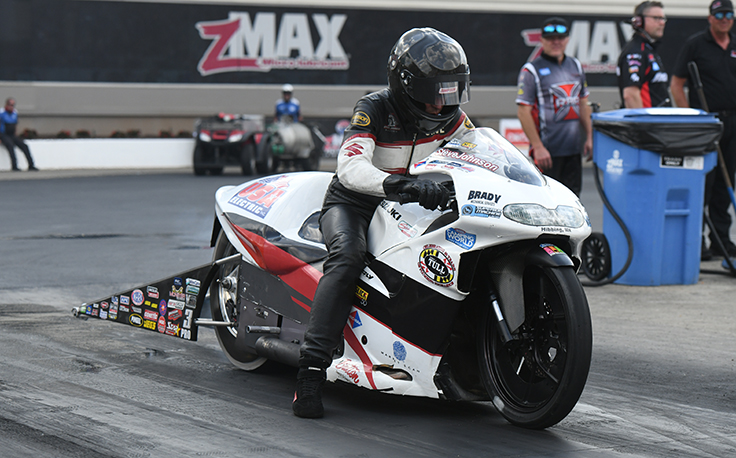 Steve Johnson and Angie Smith were among the qualifying leaders in Charlotte, so it was not much of a surprise to see them both advance from a quad that also included Ron Tornow and Hector Arana Jr. Johnson, fresh off his win last weekend in Houston, ran a 6.769 and also posted an impressive 201-mph speed on his Slick 50 Suzuki to win the quad. Smith, a runner-up at the Gainesville season-opener, became the only non-Suzuki racer to advance after a 6.819 on her Denso Buell. Smith was also the first rider off the starting line with a .041 light, gaining a significant edge over the other three riders in her quad. 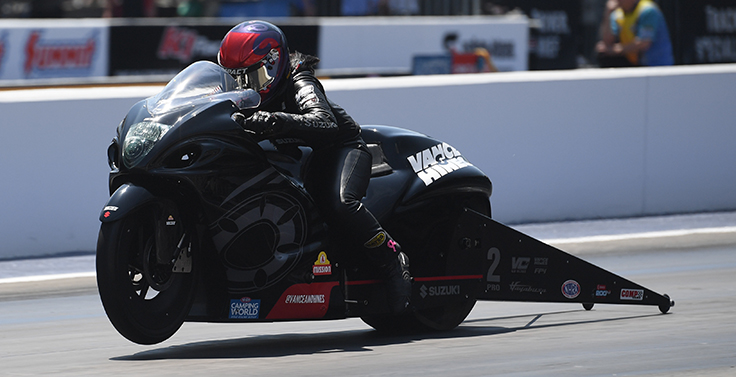 Low elapsed time of the first round went to low qualifier Angelle Sampey, who moved into the second round with a 6.760 on her Vance & Hines Suzuki. Sampey also had one of the best reaction times with a .016 light. Joining Sampey in the quarterfinals will be Joey Gladston, who held off reigning world champion Matt Smith and Kelly Clontz. Gladstone ran a 6.848 to edge Smith’s 6.869. Gladstone also had the second-best light of the quad with a .044. Of the eight riders to make it to the quarterfinals, both Gladstone and Jimmy Underdahl are still seeking their first NHRA victories.

Overlooked in the drama of final qualifying Saturday was the completion of Top Alcohol Funny Car racing from the Amalie Motor Oil NHRA Gatornationals, which was delayed by rain back in March. Matt Gill, near lane, upset world champ Sean Bellemeur for the title, the second of his career, with a solid 5.47 after Bellemeur ran into trouble on his pass. 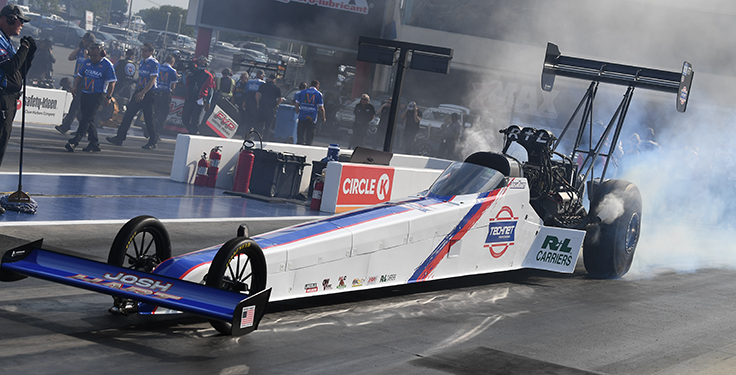 Josh Hart will have a shot at his third career Top Fuel victory after winning his semifinal quad in the Ron Douglas-tuned TechNet dragster, finishing ahead of surprise Spencer Massey, Clay Millican, and Brittany Force, whose bid for third straight victory this season went up in smoke. Hart was in the final quad here last year but finished fourth. Massey's last win was in Gainesville in 2015. 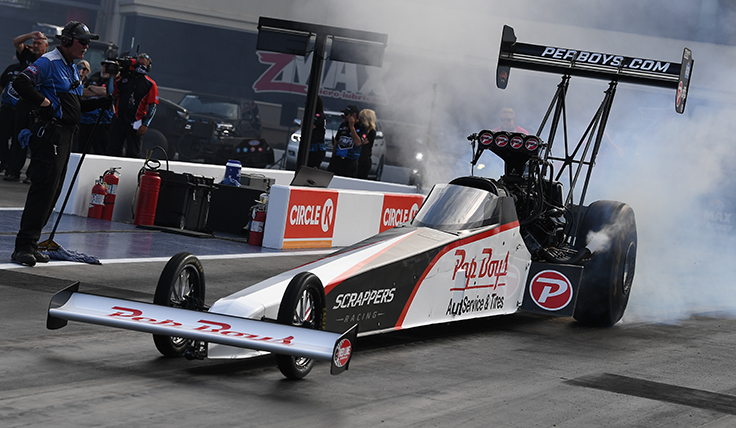 Mike Salinas, whose weekend started off with a broken clutch pedal that prevented him from backing up his Pep Boys dragster after his burnout in the first qualifying session, will have a shot at his second Four-Wide Nationals win as the 2019 Las Vegas champ won his quad ahead of another surprise finalist, Cameron Ferre, both of whom got to the stripe ahead of low qualifier Justin Ashley and Doug Kalitta. 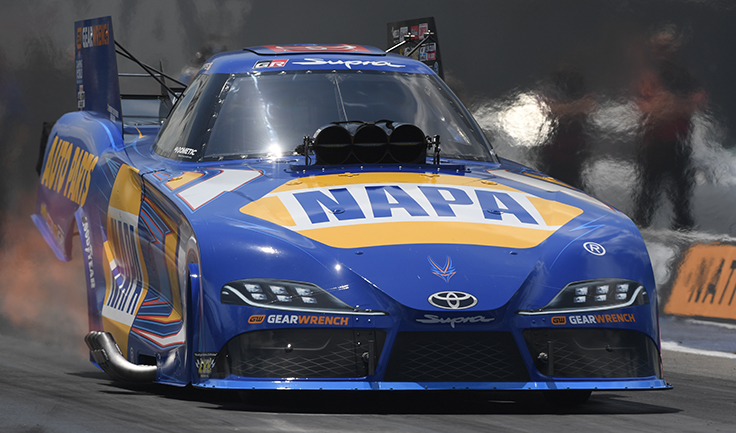 Las Vegas Four-Wide winner Ron Capps will have a chance to sweep the four-abreast series after punching his ticket to the final round with a 3.95 victory in his semifinal quad. As it was in Top Fuel, there was an upset winner joining him in the final as Mike McIntire finished ahead of points leader Matt Hagan and J.R. Todd. Despite the loss, Hagan will maintain his points lead no matter what happens in the final round. 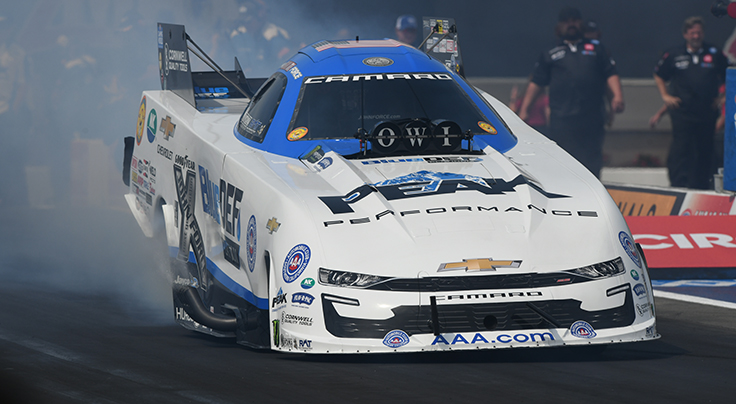 John Force Racing will have a pair of entries in the final round after Robert Hight and John Force finished 1-2 ahead of Bob Tasca III and Cruz Pedregon. Hight, Force, and Tasca all ran in the threes after Pedregon smoked the tires. 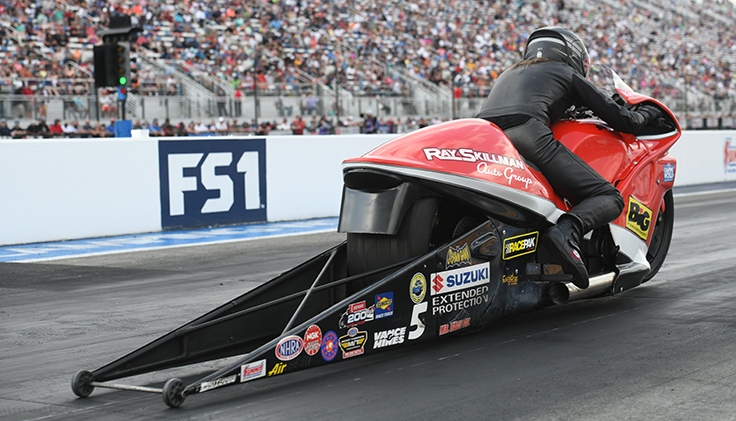 A red-light start took Angie Smith out of her semifinal quad, opening the door for Steve Johnson and Karen Stoffer to advance to the final. Johnson likely would have gotten there regardless thanks to a 6.712 that was easily the quickest run of the round. Stoffer was also consistent with a 6.810 to move to her second final of the season. Jimmy Underdahl did not advance, but he did make his second 200-mph run of the weekend with a 200.44 blast. 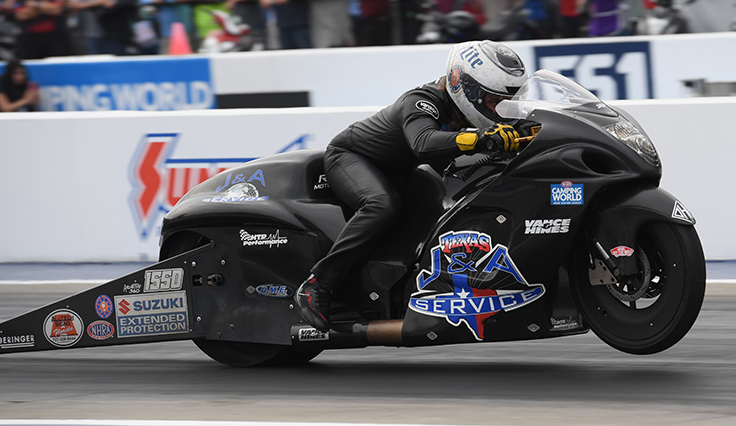 The unique nature of four wide racing was apparent in the second quad of Pro Stock Motorcycle where the two slowest elapsed times advanced while the two quickest bikes went home. Jerry Savoie made the best run of the round with a 6.789, but he fouled by .0080-second. Angelle Sampey ran 6.801, but that was negated by a late reaction time. That left Joey Gladstone and Eddie Kraweic to move on with runs of 6.818 and 6.847. Gladstone joins Top Fuel’s Cameron Ferre and Funny Car’s Mike McIntyre as NHRA pro’s who could win their first race today.