Justin Ashley, John Force, and Angelle Sampey are the professional qualifying leaders for the Circle K NHRA Four Wide Nationals at zMax Dragway. they will each enjoy lane choice when final eliminations for the twice-a-year showcase kicks off Sunday morning at 11 a.m. 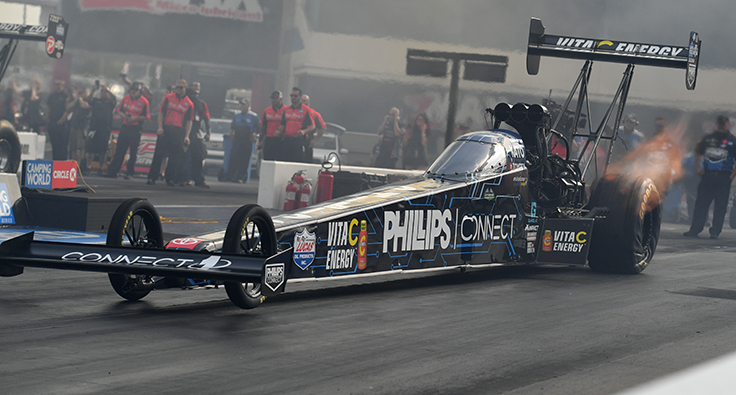 Ashley held on to the No. 1 position he earned Friday night with a 3.669 in his Mike Green- and Tommy DeLago-tuned Phillips Connect dragster as there were few improvements over Saturday’s warmer conditions. Ashley ran 3.77 in Q3 and smoked the tires in Q4.

“We used Q3 to do a little bit of testing, and really just race the racetrack,” e explained. “I think it was more important for us to be able to set ourselves up for tomorrow.

“It wasn't going to be the type of weather we'd go out there and go for it and obviously trying to prove on that .66, so it was just going up and down the racetrack. I think it was 125-degree racetrack in Q3, so we wanted to make sure that we went A to B. And then obviously, in Q4, we were racing the racetrack again; it didn't work out in our favor, but we're able to hold on to that spot.”

Eight-time Top Fuel champion Tony Schumacher had an anxious few moments in the final qualifying session, he entered the last set of passes on the bump spot with a 3.895 but was bumped by Kyle Wurtzell’s 3.854 in a new dragster put together by John Stewart and Bobby and Dom Lagana. Wurtzell’s joy was short-lived, though, as Schumacher powered back into the field on the next pass, 3.831. Schumacher ended up No. 15 with Cameron Ferre’s 3.854, which was identical to Wurtzell’s pass but with a faster speed, 319.45 to 317.72. 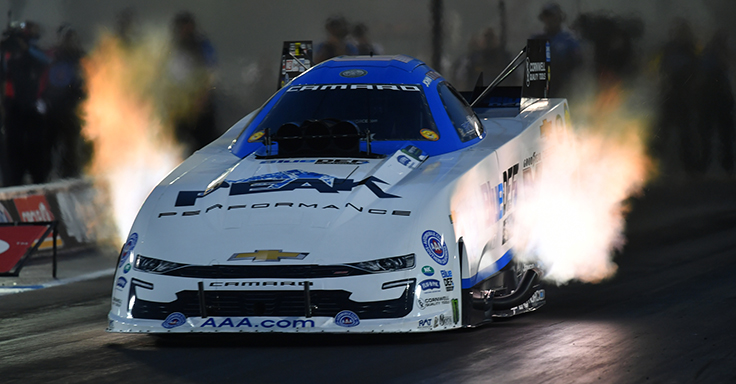 "It's a team effort and Robert hight at Auto Club tea, ran quicker, 3.87 to our 3.89, but feel I good about that because three out of four good runs for us and a little consistency," said Force. "If Robert wins, we win, but I want to win, too. He's got a couple on board, I need to get going here

"[Consistency is] what we're looking for. I'm trying to find myself on the ChristmasTree. That's always a job for me. I'm a mood-swinging person. And I've gotta get I gotta keep a lid on it. So good day for the sponsors, and let's see where tomorrow goes."

Angelle Sampey lowered the boom on the Pro Stock Motorcycle field on Saturday afternoon with a track record 6.714 on her Vance & Hines/Mission Foods Suzuki and was rewarded with the 54th low qualifier of her long and storied career. Sampey, who also ran 6.721 on her second pass of the day, added six bonus points to her total on Saturday.

Sampey, who also has top speed of the event at 201.16 mph, was just eighth quickest last weekend in Houston but the three-time world champ and her crew, led by Andrew Hines, found the sweet spot for zMax Dragway.

“This is good, but it’s just a little late,” said Sampey. “We should have done this in Gainesville and we should have done it last week in Houston. I’ve been most of the problem. When they told me what it ran I couldn’t believe it. I said holy crap. It was not perfectly straight. Even on that second [6.72] run I chopped the throttle a little before the finish line. I’m not sure it affected the E.T. much but it probably cost me a little speed. Drew [Hines, crew chief] is doing such an awesome job tuning this bike, and it’s up to me to get the job done.”

Sampey’s work is not finished. She’ll kick off eliminations in a tough quad that also features world champ Matt Smith, Joey Gladstone, and Kelly Clontz. Sampey has admittedly never been a big fan of Four Wide racing but the tide may be turning after this weekend.

“This is the best I’ve felt and it’s not just because I’m the low qualifier,” Sampey said. “I definitely don’t hate it but I still find it very confusing. When you’re in lane two or lane third you have to pay attention to the Tree. My first couple of lights were good so I hope we can go some rounds.”

Sampey’s performance pushed Houston winner Steve Johnson to second place. Johnson was the provisional low qualifier on Friday but improved his performance on Saturday with a 6.732. Johnson, appearing in his 465th career race, more than any other Pro Stock Motorcycle rider, is seeking his 11th career victory. In order to do so, he’ll have to get past Angie Smith, Hector Arana Jr., and Ron Tornow in Sunday’s opening round.

Gainesville winner Karen Stoffer also turned in a solid qualifying effort with a 6.763 to earn the third spot and a bonus point in the final session. Another rider who had reason to celebrate is Jimmy Underdahl, who made his long-awaited first 200-mph run on Saturday afternoon with a 6.827, 200.08 run aboard his Matt Smith-tuned Scrappers Suzuki. Underdahl has a shot to win his first race, but his opening quad will include Stoffer, Ryan Oehler, and Chris Bostick.