A spectacular final day of qualifying at the Betway NHRA Carolina Nationals concluded with Justin Ashley, John Force, and Erica Enders atop their respective fields at zMAX Dragway.

Ashley earned his second career Top Fuel No. 1 qualifying berth at the same place he earned his first during the Four-Wide Nationals earlier this year and did it with a career-best 3.668 that was one-thousandth of a second quicker than his 3.669 in the spring.

The No. 1 spot changed hands three times in the final session, with first Mike Salinas going 3.689 to supplant Friday leader Doug Kalitta’s 3.694, but that lasted just one pair because Clay Millican knocked him from that perch with a 3.687 in the Rick Ware Racing entry.

"I usually try and stay within myself, but I'm not gonna lie.,I was kind of like peeking at the [big screen] trying to see if I could find out what they ran," Ashley admitted, " and I did, so I figured if they ran .60s and those are a few really read racecars, Mike Green and Tommy Delago are gonna try and go up there and do the same.

"Obviously, we've had a lot of success during qualifying here through the first two races here in Charlotte this season., but we've got a long way to go. We're going to enjoy this one tonight but put it behind us and focus on race day tomorrow."

Ashley and Brittany Force (3.685 at a track speed-record 336.91) then bumped them down to Nos. 3 and 4 with Kalitta ending up fifth despite an improved 3.689 that finished behind Salinas based on speed.

Defending event champ Josh Hart (3.696), Indy winner Antron Brown (3.700), and world champ Steve Torrence (3.715) round out the top eight. Torrence will race his father, Billy, in round one.

On the day they announced a new three-year deal with Scag Power Equipment, the Tony Schumacher-driven Maynard Family dragster jumped from No. 16 to No. 11 with a 3.737 in Q3 after struggling on their first two runs. Austin Prock, last weekend’s winner, qualified No. 10 and reset his own track speed record at 334.98, which was later broken by Force.

Alex Laughlin ended up on the very quick bump spot with a 3.815 in Scott palmer’s Havoline-backed dragster and will take on Ashley in round one. On a side note, multi-discipline motorsports maven Travis Pastrana will make licensing run in the Palmer car Monday at zMAX Dragway. 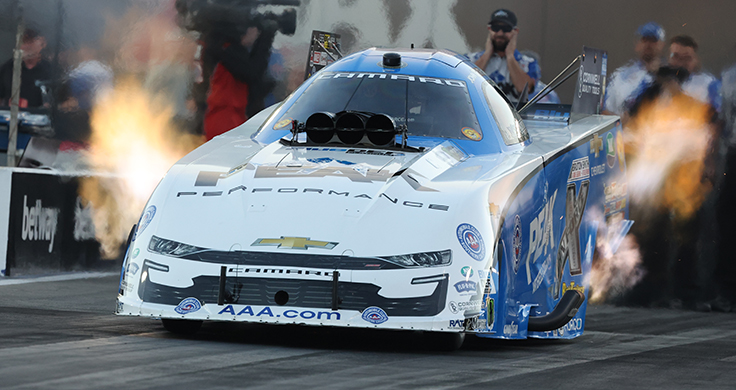 Force’s Friday 3.854 stayed atop the Funny Car pack despite a flurry of 3.8-second passes on the day, but Force’s Peak/Blue Def Camaro didn’t make a full pass on the day as they tried to better their number.

"We weren't trying to go faster," he explained. "In the last session, [crew chief DannyHood] was trying to run the same [as he did Friday] because we figured [Ron] Capps or one of those guys were gonna take it. It was spotting [rain] on the windshield, and we did try to run it like the last one, or probably close to the same, but it just didn't go.

"So tomorrow, we'll make changes, and we'll see where it goes tomorrow. It'll be what it will be, but I get to go drag racing, and that's what I get to do."

Tasca and Todd were the only drivers to run in the threes all three qualifying passes and Green knocked nearly a half-tenth off of his career-best 3.924 with a 3.887.

Enders only improved on her field-leading Friday 6.513 with a 6.510 in Q2 but got some closer competition from Elite teammate Troy Coughlin Jr., who overcame Friday’s nine-second stumble with a 6.522. Enders then reasserted that authority with a steady 6.514 in the final session, making for three runs within .004-second. It’s her fourth No. 1 of the year and the 27th of her career and earned her maximum qualifying bonus points.

"I just think this says what we're capable of and that was our goal going into Reading where we got every point there except for one," she said, "but to come in here and to accumulate nine bonus points for qualifying. with each round is 20 points., so virtually a half a round here, have a round in Reading, that equals one [round]. So we're just gonna keep chipping away at it and hopefully extend the lead.

"Having said that race days a different day, and we got a target on her back. So we got to go to work. The pressure's on me to just put my head down, go to work and do my job, make no mistakes and execute as perfectly as I can."

Coughlin finished second on the day, moving Greg Anderson down to third after Anderson could only muster a 6.528 best on the day.

Both Matt Hartford and Dallas Glenn also improved over their Friday times to record identical 6.530s with Hartford getting the fourth spot thanks to a barely better speed, 210.08 to 210.05 mph.

Larry Morgan, one of the longest-tenured Pro Stock racers in the sport, ended up on the bump with a 6.603 from his Phillips Connect Camaro and will take on Enders in round one Sunday.