From start to finish, Antron Brown enjoyed the best weekend of his 2022 NHRA Camping World Drag Racing Series season just days ago in Bristol, Tenn., leaving the three-time Top Fuel world champ eager to get back in action.

Luckily for the popular Brown, he won’t have to wait long as he will look to collect a second career win at Summit Racing Equipment Motorsports Park as part of this weekend’s Summit Racing Equipment NHRA Nationals. Brown advanced to the semifinals on Sunday in Bristol, matching his best finish of 2022 in his 11,000-horsepower Matco Tools Toyota Top Fuel dragster, and he also qualified a season-best fourth.

That tells the first-year team owner that things are on the right track after some early-season struggles, and Brown, who has 68 career wins, is ready for a breakout performance in Norwalk as the 2022 season nears the halfway mark. 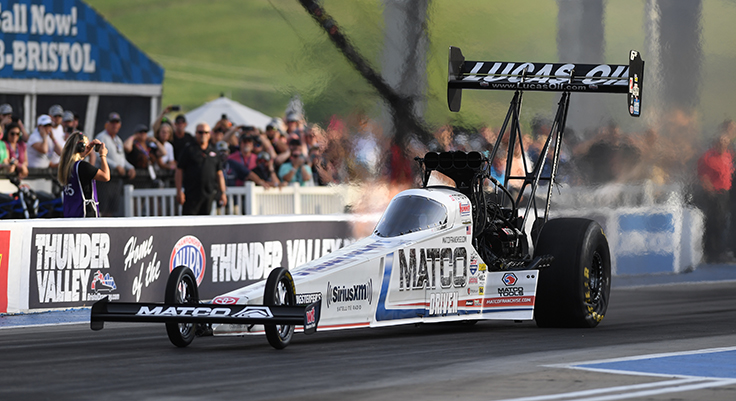 “It was a good race weekend [in Bristol], and we’re definitely making strides moving forward,” said Brown, who moved up to 10th in points. “That’s what we’re working hard to do is keep pushing forward, and I like the direction we’re going. I’m looking forward to getting to Norwalk, keeping our head down, and getting after it. It’s going to be a hot race, but we know how to navigate those conditions. It’s going to be tricky, but they always have a great track surface in Norwalk. I believe we’ll run well, and we’ll see what we can do this weekend.”

Steve Torrence (Top Fuel), Cruz Pedregon (Funny Car), Erica Enders (Pro Stock), and Matt Smith (Pro Stock Motorcycle) won the 2021 event, and this year’s race will be broadcast on both the FOX broadcast network and FOX Sports 1 (FS1). It is the 10th of 22 races during the 2022 campaign, and Brown hitting his stride right now might be perfect timing for the perennial championship contender.

Being the team owner of AB Motorsports has introduced new challenges, but Brown continues to marvel about the work his team, led by crew chief Brian Corradi, has done, even when things get difficult. Brown knows those efforts will pay off, and coming through for the first time as a team owner – at one of the finest facilities on the NHRA tour – would be meaningful for the Top Fuel star.

“This team is pulling hard together,” Brown said. “We went some rounds [in Bristol], and the one thing about that is, when you’re going rounds, you’re always improving, and the more laps you get, the better you get. We’re headed in the right direction.”

To purchase tickets to the Summit Racing Equipment NHRA Nationals, fans can visit www.summitmotorsportspark.com or call 419-668-5555. Children 12 and under are free in general admission with the purchase of an adult ticket.