Among all competitors in the NHRA Camping World Drag Racing Series, nobody has made a bigger move in the Countdown to the Championship playoffs than Pro Stock Motorcycle’s Angie Smith, who has jumped up four spots to third place in just two playoff races in the category.
14 Oct 2022
Posted by NHRA.com staff
Feature

Among all competitors in the NHRA Camping World Drag Racing Series, nobody has made a bigger move in the Countdown to the Championship playoffs than Pro Stock Motorcycle’s Angie Smith.

She’s jumped up four spots to third place in just two playoff races in the category, but Smith isn’t satisfied and will get the chance to move up even more at this weekend’s 37th annual Texas NHRA FallNationals at Texas Motorplex. Smith trails her husband, defending world champion and event winner Matt Smith, by 90 points, while Joey Gladstone is just 21 points out of first.

She has raced well during the Countdown to the Championship, advancing to the final round in Reading to open the postseason on her Denso Auto Parts Buell. She’s also been consistent and avoided an early loss in St. Louis, putting Smith in a position to try and win a championship as she aims for her first win of the season this weekend in Dallas. 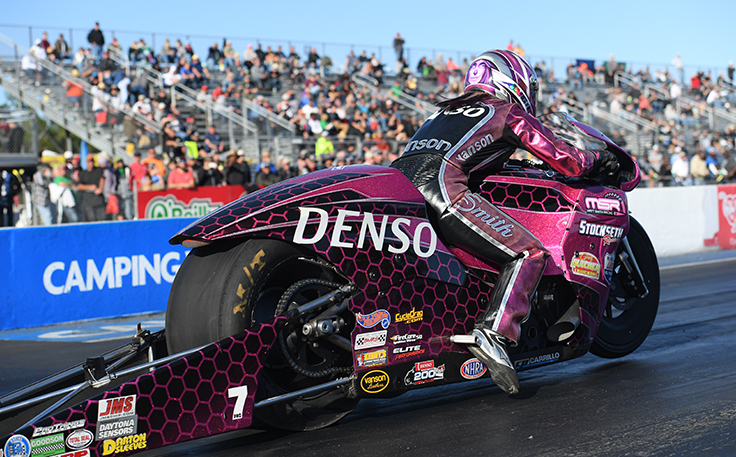 “All the races in the Countdown in this class are tough, so you have to put your best foot forward,” Smith said. “You can have some bumps in the road during the regular season and then be flawless in the Countdown and come out well. Having momentum is important, and it’s all about just making good runs down the track. I feel more prepared, and I have a good motorcycle that’s making consistent runs. It’s all about putting your head down and trying to focus on the big prize."

Riding what she believes is the best bike she’s ever been on has certainly helped, but Smith also admits she’s better prepared to handle those mental challenges at the biggest races of the season. That’s been evident, as she has advanced to a pair of final rounds this season, also qualifying No. 1 in Virginia. But grinding out wins in the Countdown to the Championship isn’t easy, as Smith will also have to deal with the likes of Eddie Krawiec, Jerry Savoie, Steve Johnson, and Angelle Sampey in Dallas. Still, Smith is driven when it comes to chasing the perfection that is needed during the postseason, and she’s ready to tackle the challenge this weekend.

“One hundred percent, this is the best bike and the best year I’ve ever had, and I’ve learned a lot,” Smith said. “But drag racing is a humbling sport, and that’s why every lap counts. You have to put your best foot forward and make the best run possible, try to make it perfect and then you will have a shot. I feel confident going into this race that we’re going to keep making those good runs, but you have to be perfect in the Countdown, and I have to be focused on what I’m doing.”