Antron Brown made history as the first African-American to win a major motorsports championship when he won the 2012 NHRA Top Fuel championship, but it sure didn’t come easy. First in a series.
18 Oct 2022
Phil Burgess, NHRA National Dragster Editor
NHRA's Closest Championship Finishes (2007-21)

Antron Brown made history as the first African-American to win a major motorsports championship when he won the 2012 NHRA Top Fuel championship, but it sure didn’t come easy.

Brown came into the season final in Pomona leading then-seven-time world champ Tony Schumacher by a seemingly comfortable margin of 65 points. Brown had lost a first-round pedalfest to Khalid alBalooshi, the 11th-ranked rookie driver who went 3-0 against Brown during the playoffs, at the Las Vegas event two weeks earlier and needed to win just his first-round race with Spencer Massey in Pomona to seal the title.

Brown took the lead while Massey pedaled to get through tire shake, but disaster struck when a fuel line came apart, which leaned out the engine of the Matco dragster, allowing burning fuel to enter the cockpit. Brown experienced minor burns that paled in comparison to the crushing weight of watching to see whether Massey or Schumacher could pull off an event win and therefore take the title from him.

Massey lost to Brandon Bernstein in round two, but Brown and his team trotted out to the starting line each time to see Schumacher win round after round until he met Bernstein in the final, trailing Brown by just seven points.

Brown stood nervously on the starting line, watching his once seemingly insurmountable lead being erased 20 points at a time, hoping to see someone — anyone — stop Schumacher and history from repeating itself. Had his hands not been wrapped in gauze from the burns, he would probably have nibbled his fingernails to the quick.

“When you go through a moment like we had, there’s nothing you can do but sit and watch,” said Brown. “It felt like being a kid in elementary school when days felt like they were 30 hours long. You’re watching people race and can’t do anything about it. I felt like we had a 30% chance.”
.
Brown’s chances seemed bleak due to Schumacher having made miracle comebacks look routine with “The Run” in 2006 and his 2007 championship, in which he overcame an even larger deficit with one race remaining than he had this season.

The Tree flashed green, both cars made flawless passes beneath the darkened California sky, and Schumacher ran low e.t. of eliminations with a picture-perfect 3.753, but the win light came on in Bernstein’s lane, just above his 3.762 e.t., denoting a stunning .008-second holeshot victory. Schumacher’s .054 light — one of the 10 best of eliminations — had been trumped by Bernstein’s .037 reaction, not only the best of eliminations but also his best this season, to give Bernstein his first win in three years and Brown his first series championship. 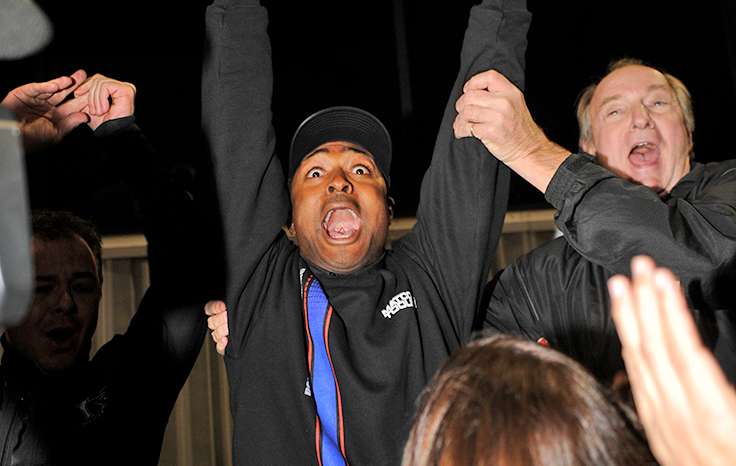 Pandemonium erupted on the starting line as Brown thrust his arms in the air and fell into the arms of his wife, Billie Jo, family, and friends who swarmed one of the sport’s most popular drivers at the greatest moment of his career.

“I saw both cars stay fully lit up all the way down the racetrack,” said Brown. “I saw Tony’s 3.75 pop up and thought, ‘He’s got it.’ Then I saw the win light on Brandon’s side, and it was like, ‘Brandon just won?!’ It was mixed emotions. I put my hands up. I thought about our team, and it set in that we just won. To win the championship with the way the competition has been this year in Top Fuel is incredible. To run and compete like we’ve been competing all year long was a phenomenal job." 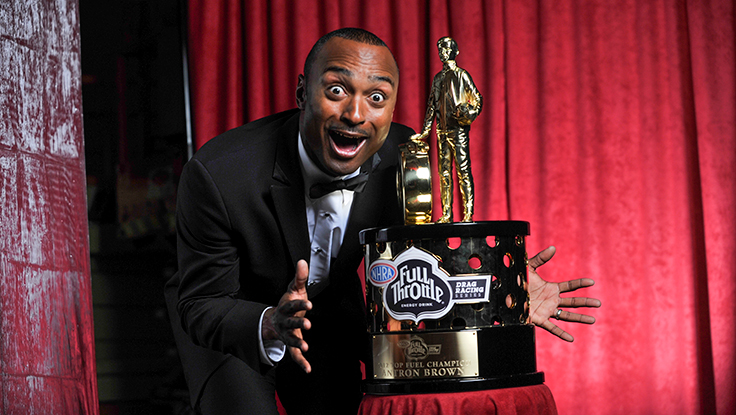