Tony Schumacher knows drama. And Tony Schumacher knows how to win championships. The perennial Top Fuel powerhouse won his sixth straight and seventh overall Top Fuel crown in 2009 by just two points, and while it wasn’t as dramatic as “The Run” closing out the 2006 title, it was nonetheless the closest finish in Top Fuel history.

Famed tuner Alan Johnson had left Schumacher’s U.S. Army team at the end of the previous season, and Mike Green took control. Ironically, it was Johnson's new charge, Larry Dixon, driver of the Al-Anabi Racing team, who went back and forth with Schumacher during the year, and the battle raged into the final event of the season.

Even in a spot where finishes are decided by milliseconds, it was crazy to see the points lead change hands by single digits in Pomona.

Schumacher entered the event with a one-point lead over Dixon, then increased it to two by qualifying No. 1 on Thursday. Dixon grabbed the No. 1 spot Friday and assumed the points lead by one tally, then increased it to two Saturday morning. With everyone predicting a Schumacher-Dixon final-round battle for all the marbles and knowing that a one-point lead entering eliminations was, in essence, the equivalent of a full round’s worth of points, all eyes turned to the final qualifying session, which was delayed deep into a chilly night by oildowns. 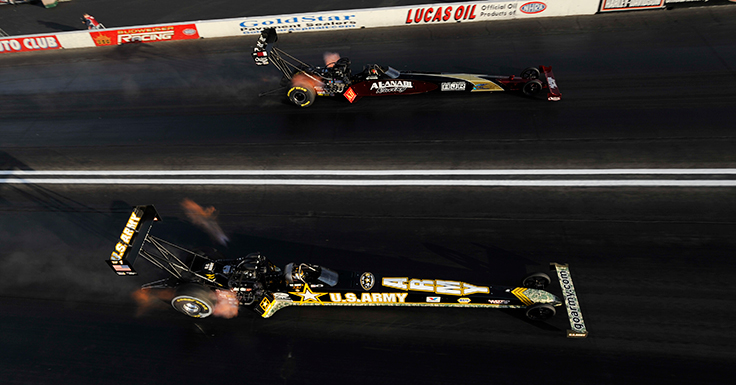 Schumacher and Dixon took center stage well past 6:30, and Schumacher, on a clutch pass reminiscent of “The Run,” stormed to a 3.772 to take the pole — and the points lead, by two — from Dixon, who smoked the tires.

“That run was bone-crushing, weight-of-the-world pressure, and that U.S. Army team came through — unbelievable,” said Schumacher. “That was definitely huge. We ended up putting a round of racing between us. I can’t say enough about my crew chief and my team. It was a classic example of a bases-loaded, bottom-of-the-ninth situation. We needed to come up with the big hit, and that’s exactly what happened.”

“It was the second ‘Run,’ ” he added. “I got to live both of the moments out there, one with Alan and one against Alan. That was so cool. I couldn’t have written a better script.”

That run and those two points proved pivotal when Schumacher and Dixon both were unexpectedly stopped one round short of their expected final-round showdown, defeated, respectively, by Antron Brown and Spencer Massey. Dixon lost traction against rookie of the year Massey, sending the Schumacher team, poised behind, into celebration. A few minutes later, the U.S. Army team, too, unexpectedly lost, outrun by teammate Brown, 3.82 to 3.83, sealing the final margin at those two points earned in dramatic fashion the night before.

Brown, who led the standings throughout the regular season before the points were reset in the playoffs, defeated red-lighting Massey in the final round to claim his sixth win of the season and finished third. 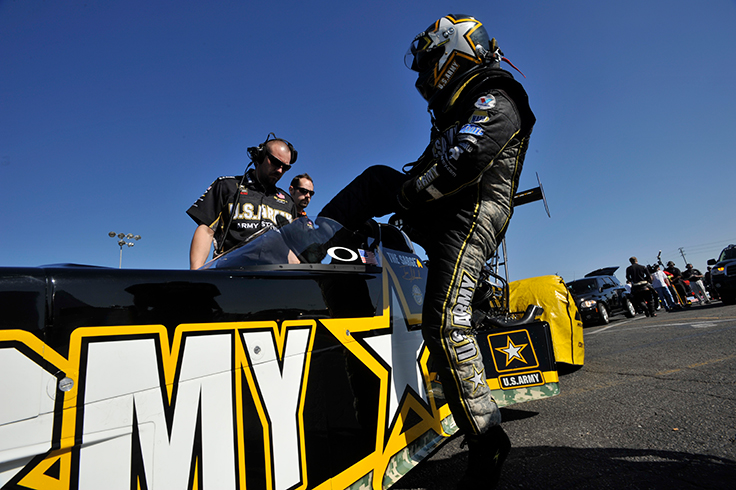