Western Swing recap: Some gained traction, some lost, and some broke even

With just three races left before the Countdown to the Championship playoffs begin, let’s look at who made the biggest moves over races in Denver, Sonoma, and Pomona and look at who needs to turn it around in a hurry.
05 Aug 2021
Josh Hachat
Feature

There’s plenty that took place over the past three races on the first Western Swing since 2019, and that meant plenty of moving and shaking in the points standings.

With now just three races left before the Countdown to the Championship playoffs begin, let’s look at who made the biggest moves over races in Denver, Sonoma, and Pomona and look at who needs to turn it around in a hurry.

By nearly sweeping the Western Swing, it remains a class dominated by Steve Torrence. But the talented Texan wasn’t the only driver who impressed over the past three races. 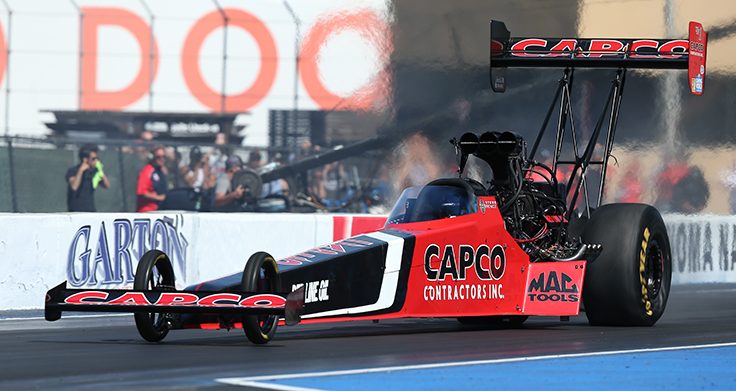 GAINING TRACTION: Torrence. This one is obvious, but Torrence only strengthened his hold on the class, even if he lost in the opening round in Pomona. Before that, he won back-to-back races and built on an already commanding points lead. Leaving Norwalk, he held a 215-point lead over Antron Brown, and it’s now up to 313 points, virtually guaranteeing he’ll enter the Countdown to the Championship as the points leader, which, of course, is a surprise to nobody. 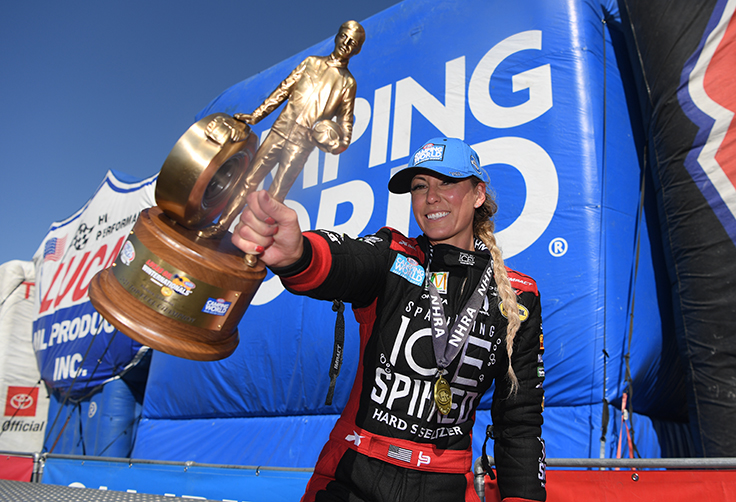 GAINING TRACTION: Leah Pruett. In a matter of two races, the fortunes for Pruett’s season had a swift change. She was just eighth after Norwalk, failing to advance past the second round at any of the first seven races. Leaving Pomona, Pruett is fourth, jumping four spots on the strength of back-to-back final rounds and a much-needed win in Pomona. She’s also within striking distance of third and could have the most momentum of anyone in the class.

GAINING TRACTION: Mike Salinas. The California native did well out West, moving from ninth — and precariously close to being outside the Top 10 — to sixth and firmly in the championship conversation. He had two semifinal appearances on the Western Swing and is just a point out of fifth heading to Brainerd. 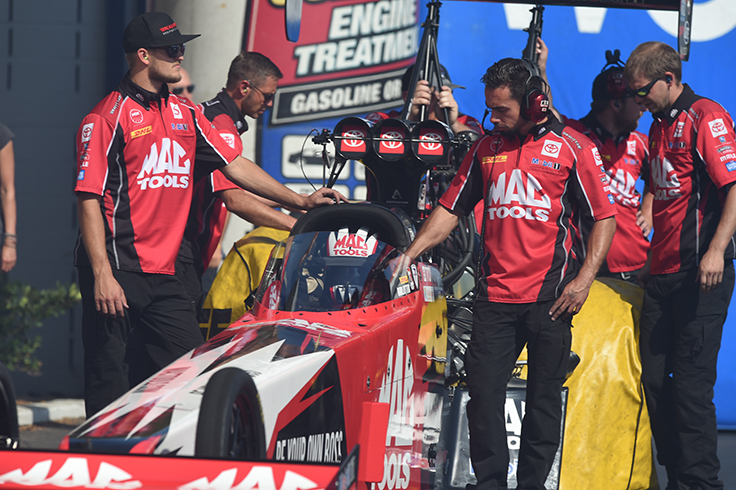 LOSING TRACTION: Doug Kalitta. The veteran entered the Western Swing seventh in points, but his troubles this season continued, winning just one round over three races. He had dominated Pomona in recent years, but he fell in a surprising first-round loss there and now finds himself ninth in points. It’s a precarious and uncharacteristic spot for Kalitta, who will look to turn things around in the next few races.

IN THE MIDDLE: Shawn Langdon. The former world champ didn’t have much success, winning two rounds over three races, but he remained in fifth. With a handful of drivers right behind him, now would be the perfect time for Langdon to get on track.

Funny Car was the only class that saw the points lead change hands during the Western Swing, as Ron Capps jumped into the lead. But the class is still tightly bunched, and that was only emphasized in the past three races. 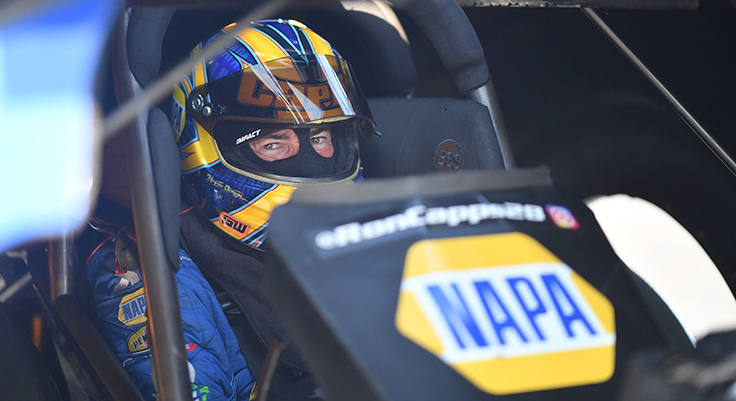 GAINING TRACTION: Ron Capps. He’s been as consistent as nearly everyone in the class, and Capps took that a step further in Pomona, winning his first race of the year after back-to-back semifinal appearances in Denver and Sonoma. That vaulted him into the points lead, as he went from fifth to first in the matter of three races. It won’t be easy to keep the lead, but Capps, who was nearly 150 points back of Bob Tasca III when the Western Swing started, has to like what he sees from his team.

LOSING TRACTION: Cruz Pedregon had plenty of momentum after winning in Norwalk, which put him at seventh in points. But he couldn’t take advantage at tracks where he usually performs well, winning just one round over the trio of events. That dropped him back to ninth, with the team looking to regroup in Brainerd. 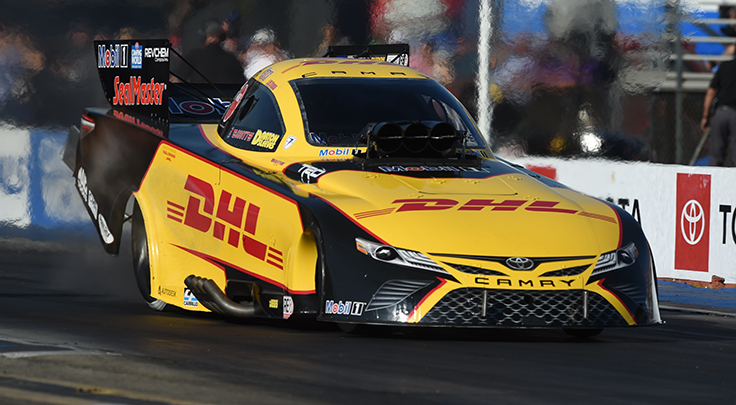 LOSING TRACTION: It’s hard to put J.R. Todd in this category following a final-round appearance in Pomona, but the numbers don’t lie. He was third in points after Norwalk and left Pomona in sixth. The caveat, though, is he’s only 21 points out of third, so there’s plenty of opportunities to make up ground quickly. Plus, Todd and his team have always been strong finishers.

GAINING TRACTION: Matt Hagan. The defending world champ only moved from sixth to fifth, but he got a much-needed win in Denver and is only nine points out of third, putting DSR in a great position to have two top cars for the playoffs. 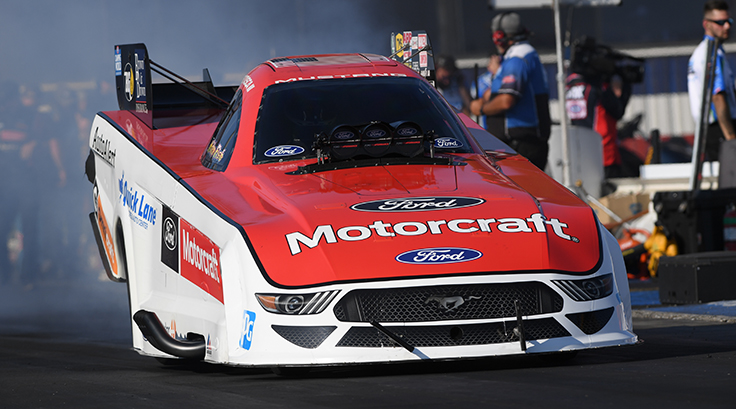 (SLIGHTLY) LOSING TRACTION: Bob Tasca III. The bad news is Tasca lost the points lead he’s held since the second race of the year, putting together just two round-wins on the Western Swing. But he’s still just five points back of Capps, and Tasca has repeatedly proven he’s in this for the long haul this year.

TO BE DETERMINED: Blake Alexander and Terry Haddock. Haddock led Alexander by four points for the 10th and final spot in the playoffs leaving Norwalk. After Pomona, Alexander jumped into the lead — but by only six points. The 10-point shift certainly didn’t cement Alexander’s spot, and this will be a race to watch as both drivers seek their first Countdown to the Championship spot.

Pro Stock only raced twice on the Western Swing, but there were some strong impressions made as Greg Anderson may have found his biggest challenger during this time. Anderson continued his qualifying dominance, taking No. 1 both times, but he wasn’t able to get that win to tie Warren Johnson for the most in class history, something that has eluded him since early May. 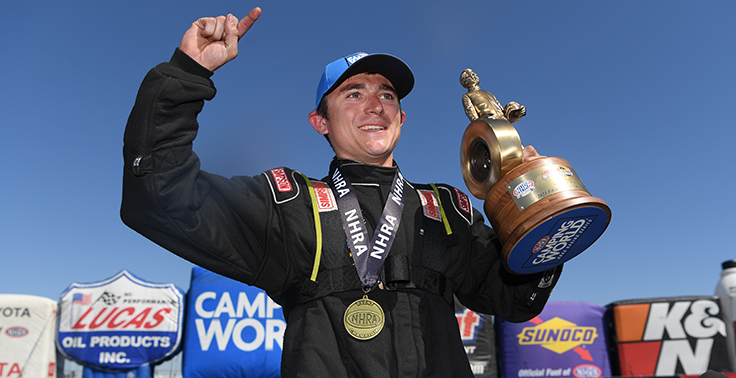 GAINING TRACTION: Aaron Stanfield. This one is obvious. Stanfield had a mini-sweep of the Western Swing, winning back-to-back races in Sonoma and Pomona to move up a spot to second. He trailed Anderson by 169 points leaving Norwalk and closed that gap to 126 by beating him in the semifinals in Sonoma and the finals in Pomona. Stanfield appears more than ready to duke it out with Anderson, and it should be fun to watch.

GAINING TRACTION: Dallas Glenn. The potential NHRA Rookie of the Year continued to impress and prove he’s the real deal, making a strong showing in his first race in Sonoma. He advanced to the finals in Sonoma, and while Pomona wasn’t great, Glenn still moved up two spots to fifth. 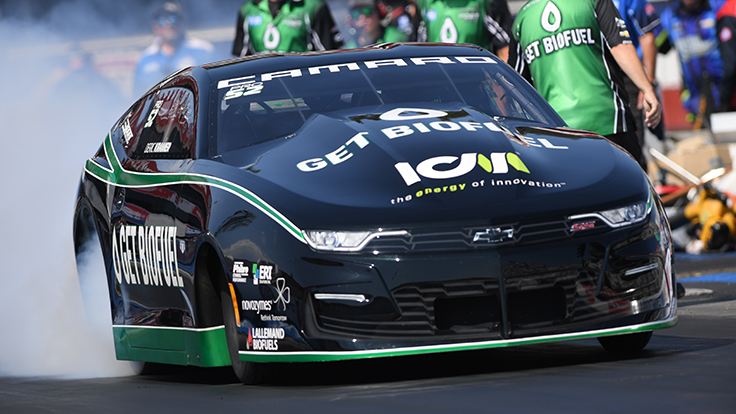 LOSING TRACTION: Deric Kramer. The talented driver hasn’t found his footing in recent races, losing in the first round in both races — and now the past four events. It’s been a free fall in the points standings, too, as he’s plummeted from second after Houston to ninth leaving Pomona.

GAINING TRACTION: Kyle Koretsky. It’s been somewhat of an up-and-down season for the young standout, but he appeared to find his groove over the last two races, moving from eighth to sixth by winning three rounds, including a semifinal appearance in Pomona at his sponsor’s race.

It was the category’s first time running the full three-race Western Swing, and Matt Smith made the most of it, making the strongest impression of anyone in the class. 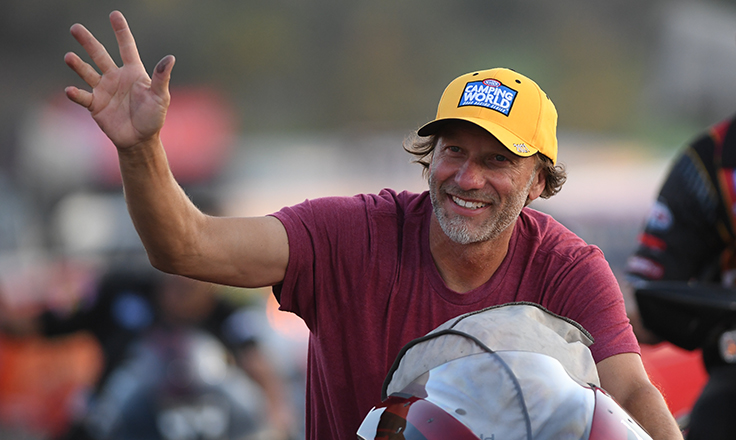 GAINING TRACTION: Matt Smith. The defending world champ was firmly in command, leading the class by winning in Norwalk with a clutch performance. But he found another level over the past three races, winning in Denver and Pomona in difficult conditions. He was also the No. 1 qualifier at those two races, stretching his points lead from 93 following Norwalk to a whopping 262 heading to the final three races of the regular season.

GAINING TRACTION: Eddie Krawiec (and Andrew Hines): Both were a step behind missing the first two races, but each rider felt better about their playoff position leaving Pomona. Hines moved to 10th — though only seven points ahead of Cory Reed — while Krawiec moved from 10th to eighth with a solid Western Swing.

GAINING TRACTION: The trio of Angelle Sampey, Angie Smith, and Karen Stoffer. None made massive jumps, but each moved up a spot over the last three races. Sampey is now fourth (going to the finals in Pomona), Smith improved to sixth, and Stoffer crept up to seventh on the strength of her Sonoma victory.