That was then, this is now: Greg Anderson on the state of Pro Stock parity

Greg Anderson made Pro Stock history in Dallas with his 98th career win to supplant his mentor Warren Johnson as Pro Stock’s winningest driver, but it took years of toil and heartache to become the champion he is.

Anderson didn’t win his first Pro Stock race until his 52nd start, in Bristol in 2001, a far cry from the success of his new teammate, Dallas Glenn, who won in just his fourth start thanks to the power and preparation provided by the KB Racing team, or young Kyle Koretsky, who scored his first career win a few weeks ago in Charlotte, defeating Anderson in the final.

But don’t color Anderson upset by the new trend of fast starts for new talent.

“They're jumping into the best equipment money can possibly buy and experience can possibly create. They're jumping into that with all that youth and enthusiasm and lack of fear. They don't fear anybody, and they're an instant success. It’s completely changed the class and certainly made it more difficult on the veterans in the class, but it's made the class more interesting, so that's what it's all about. And you know, I'll bite the bullet for that. It's helped the class tremendously, and I'm happy to be part of it.”

Still, it’s a far cry from the Pro Stock world that Anderson jumped into in 1998. 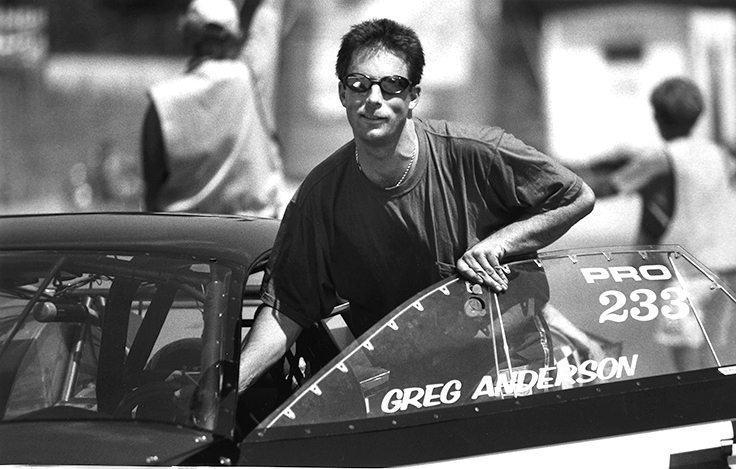 “When I came into this deal, you begged, borrowed, and stole to get some kind of a race car, and that was going to be a five- or 10-year-old race car, a hand-me-down from who knows how many people, and you begged for some type of an engine that was going to be something nobody wanted to race anymore themselves,” he said. “You couldn't jump into a car that could win races, could qualify at the top of the pack before, and now they can, and I think half of them don’t realize how fortunate they are that they've got that right now. The class is great, and the tracks are great.

“Back in the day, you didn't have a great racetrack every time you went out, and you had to physically find a way to get that car to the finish line without wrecking or scrubbing off a lot of e.t. going down the track, so they don't have that bigger worry. I'm not saying that conditions can't change and make it tough out there, but right now, the way the tracks have been the last half-dozen races are pretty doggone good through the middle, and that's why the cars are all equaled out. They're all even, they're all fast, and nearly nobody's aborting runs, nobody's making mistakes.

“It's very difficult, and we spend every single minute we have between runs and at the shop working on every single engine we got, every car we got,” he added about his teammates’ cars. “It's not like we work twice the hours on my car or anything to try and make it special. We work every bit as hard if not harder on the rest of them to try and make them as fast. If one's not quite as fast that week, we work harder on that one the next week. But yes, it makes it tough. It makes it tough on me to try to beat your best effort to try and beat yourself. That's really what it comes down to. So, it's a feather in the cap when I get it done, and you feel awful good. But it's very easy to get get your ass whooped by doing that.”

On the plus side for Anderson, that kind of parity will make it hard for anyone in Pro Stock to ever have a 15-win season like he had in 2004 or even the 12-race season he had in 2003, and, even though Erica Enders’ 33 wins are the next closest to his total among active drivers, Anderson doesn’t see his mark standing forever.

“Warren always said that records are made to be broken, and I still believe that somewhere down the line, someone is gonna break it. I truly believe that, but it looks like it's gonna take a while. I don't know if I'll be around to see it.”