After struggling at the most recent race, this weekend’s NGK NTK NHRA Four-Wide Nationals at zMAX Dragway marks a chance for rising Pro Stock star Troy Coughlin Jr. to get back on track.
13 May 2021
Posted by NHRA.com staff
Feature

After struggling at the most recent race, this weekend’s NGK NTK NHRA Four-Wide Nationals at zMAX Dragway marks a chance for rising Pro Stock star Troy Coughlin Jr. to get back on track. It’s also an opportunity for the young Coughlin, who is the nephew of retired five-time champ Jeg Coughlin Jr., to get his first four-wide victory.

It’s the second four-wide Pro Stock race for the second-year driver and a key moment to grab some early-season momentum in his JEGS.com Chevrolet Camaro at the sport’s biggest spectacle. He fell in the opening round at the most recent race in Atlanta, but Coughlin, who advanced to the finals at the 2021 NHRA Camping World Drag Racing Series opener, has a chance to quickly make amends.

“When you have a race where things didn't go as planned, you just have to start over, get back in the car, and do what you do,” Coughlin said. “It’s about living in the moment. I can't advance forward if I'm thinking about the past. If you think about the past, you'll end up repeating it because your mind goes to what you're focused on. Pro Stock cars are very challenging to drive. It's not easy, but it's so much fun when you get it all right, like we did for the most part in Gainesville. I know with Elite Motorsports behind me, I've always got a great chance to win.” 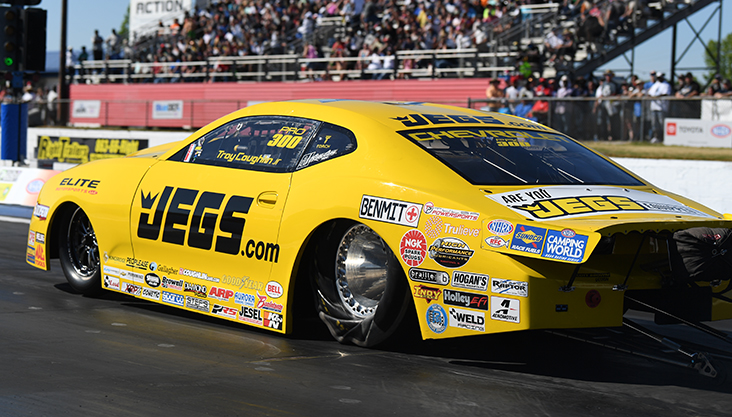 Coughlin has always enjoyed the racing scene in Charlotte, making it the perfect spot for his first career win in Pro Stock. It won’t be easy, especially considering Greg Anderson’s hot start in 2021. The four-time world champ has won two of the first three races, and Coughlin also has to face off with teammate and defending world champ Erica Enders, who won the race in 2018, Deric Kramer, 2017 race winner Chris McGaha, and Aaron Stanfield.

“Charlotte is a fun town with a lot of really great motorsports fans,” Coughlin said. “Plus, we have a lot of customers from that area, so we really want to show what we're capable of. This will also be the first time to race with some family as my sister Paige is racing in Super Comp. We've always raced as a family, so I tend to have the most fun when we're together.”

Tickets are on sale for Friday’s and Sunday’s action at the NGK NTK NHRA Four-Wide Nationals and may be purchased by visiting www.zmaxdragway.com or calling 800.455.3267. Children 13 and under are admitted free with a paid adult.