Heading back into the seat of her 11,000-hp Monster Energy/Flav-R-Pac dragster after more than a year away, Brittany Force's joy was evident in Gainesville and it will be apparent at this weekend’s Denso Spark Plugs NHRA Four-Wide Nationals.
17 Apr 2021
Josh Hachat
Feature

Heading back into the seat of her 11,000-hp Monster Energy/Flav-R-Pac dragster after more than a year away, Brittany Force experienced all the expected nerves one might expect.

But as the dragster fired up and Force made those first runs, it quickly dissipated, serving as a reminder of not only how close Force’s team remained after all that time away, but also how much Force loves the sport.

“We got to testing and everyone just rolled back into their routine. It was like I was in the car the whole time,” Force said. “It was very surprising. You’re nervous and thinking, ‘Am I going to forget how to do this?’ But once we got out there, it was just exciting. You could feel the energy. This is home for me — in the car, making runs.”

That joy was evident in Gainesville to kick off the 2021 NHRA Camping World Drag Racing Series season, and it will be apparent at this weekend’s Denso Spark Plugs NHRA Four-Wide Nationals at The Strip at Las Vegas Motor Speedway. 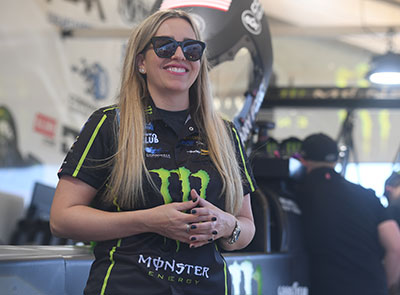 The last time Force, the 2017 Top Fuel world champ, raced in Vegas at the tail end of a memorable 2019 campaign, she broke the track e.t. record and made the fastest run in NHRA Top Fuel history with a blast of 3.659 seconds at 338.17 mph. She also won that race, which helped cap off a standout year with crew chiefs David Grubnic and Mac Savage.

Force raved about the close relationship she established with that group, enabling her to thrive and feel even more comfortable behind the wheel. It was clear a special connection had been formed between them all, which made last year, and also racing twice before the COVID-19 pandemic hit, so disheartening.

But the team never skipped a beat when returning to action after a year, and Force pointed back to that relationship the team has developed and continued.

"I was just so excited to be back, being back in my old routine and working with my crew chiefs and team,” Force said. “That loyalty to John Force Racing they showed, sticking by us all last year, that’s big. We’ve got the exact same team from 2019 and the first two races of 2020, and I think that really says it all.”

What it tells Force is the team shouldn’t miss a beat after that time away and can resume their winning ways. Despite a first-round loss in Gainesville, the team ran well in qualifying and in testing before that, and she has consistently performed well in Las Vegas.

The challenges of four-wide racing also haven’t got the best of Force, who won in Charlotte in 2016 and finished as runner-up at the most recent four-wide event in Las Vegas in 2019.
That gives her confidence heading into the weekend, even as Force knows she has to be on her game with the unique setup of four-wide racing.

“The four-wide race is definitely tricky. It’s a whole different ballgame,” Force said. “You have to know what lane you’re in, what bulb you’re looking at, and the whole staging routine is much longer. It’s fun for the fans, and we’ve had success with it, so we’re ready.

“For me, the key is keeping that focus, but I feel like we can pick up where we left off. We’re feeling good, and I love racing in Vegas. It’s one of my favorite tracks, and I’m excited.”