Mike Salinas will do double duty at this weekend's NGK NTK NHRA Four-Wide Nationals, driving his national event-winning Top Fueler and his new car, a ProCharger-equipped Camaro in which he will make his Pro Mod debut.
14 May 2021
Phil Burgess, NHRA National Dragster Editor
Feature

Mike Salinas admits that he can’t sit still. The owner of multiple successful businesses in California, including the namesake scrap business that was the inspiration for the Scrappers Racing logo that adorns the family’s multiple race cars, Salinas will do double duty this weekend, driving his national event-winning Top Fueler and his new car, a ProCharger-equipped Camaro in which he will make his Pro Mod debut.

Two of Salinas’ four daughters are also competing this weekend, Jianna in Pro Stock Motorcycle and Jasmine, who is making her return to A/Fuel Dragster after a car-destroying crash at the Amalie Motor Oil NHRA Gatornationals earlier this year. A third daughter, Janae, will make her A/Fuel debut later this year.

“I just needed something else to keep me busy, and to have someone else to yell at me,” he joked about his new car. “It’s hard to come to the track and only get to make two runs a day [in Top Fuel]. I’ve never been one to sit still. I could never be a fisherman. I have to always be in motion." 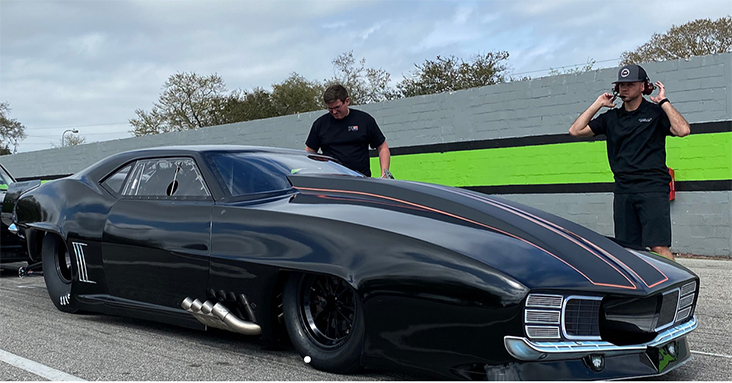 Salinas’ wicked-looking black Camaro was previously campaigned by Sidnei Frigo but has been overhauled by the team at ProLine, and the combination changed to fit Salinas, who tips the scales at about 150 pounds less than Frigo. Pro Mod whiz Steve Petty is tuning the car.

Salinas plans to run all of the remaining events in the E3 Spark Plugs Pro Mod season, doing double duty at both. 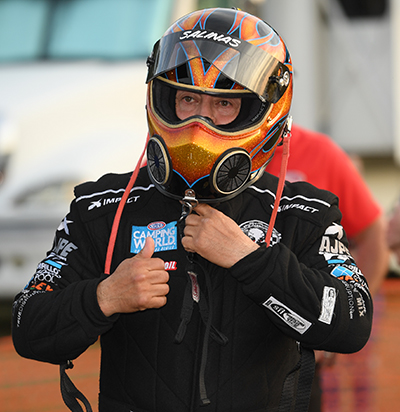 “This year, we’re just here to learn and have a good time with it,” he acknowledged. “[Fellow Pro Mod drivers] Jose Gonzales, Eric Dillard, and Khalid alBalooshi have all worked with me to show him how to drive.

“I had never driven a doorcar, only dragsters, and they’re totally different animals, and you definitely can’t mix them up,” he said “Obviously, the driving procedures for both are completely different – this car has a 3-speed manual transmission [the dragster doesn’t have one],  the view, the driver’s perspective, everything. With a dragster, you always want to have your body in the center of the lane, but you obviously don’t want to do that with a doorcar.

On this first pass earlier this year in Orlando, Fla., he hit the brakes too hard at the end of a 5.74 pass and almost lost control but got the parachutes out and the car safely straightened. He’s gaining experience and performance, including a 5.64 that he ran recently in testing the car in non-NHRA trim but expects the car to run competitively this weekend. 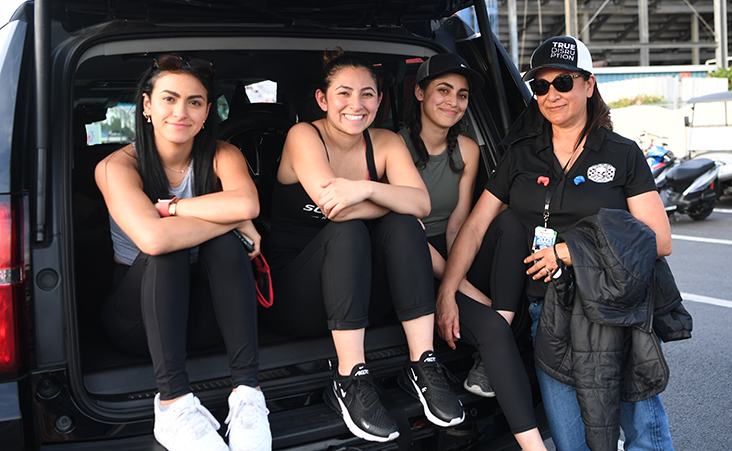 “I just turned 60 [April 27], but when I get up in the morning, like today, I told my wife, 'I feel like I’m 16 all over again,' ” he said. “I’m so excited about this Pro Mod car and everything we’ve got planned for the future. We all just love drag racing so much."