Steve Torrence has done a lot of amazing things in his career, including winning four world championships and 50 national events, but the one thing that the reigning Top Fuel champ has never done is win the Lucas Oil NHRA Nationals in Brainerd.
20 Aug 2021
Posted by NHRA.com staff
Feature

During his incredible run that started during the 2017 NHRA Camping World Drag Racing Series season, Top Fuel star Steve Torrence has won a tremendous number of races, as well as three consecutive championships. But none of the 38 victories in that span have come at Brainerd Int'l Raceway, which is the site of this weekend’s 39th annual Lucas Oil NHRA Nationals.

In fact, it’s the only track on the NHRA tour where Torrence doesn’t have a victory, something the current points leader will try to change at the fan-favorite facility. He’s been downright dominant in his 11,000-hp Capco Contractors dragster in recent seasons, and that includes this year, where Torrence has picked up six wins and will carry the points lead into the upcoming Countdown to the Championship playoffs. Solving Brainerd would give the team plenty of momentum heading into crunch time, and Torrence is eager to try and tackle this weekend’s challenge.

“We just never have been able to put everything together,” said Torrence, who is also looking for his first-ever final round in Brainerd. “We’ve run well. I think we qualified second the last two races [2018 and 2019], and I know we’ve been to the semifinals a couple times [2008 and 2018]. I’m glad to be back, though. I think as a group we respond pretty well to challenges like this. With [crew chief] Richard Hogan, Bobby Lagana, and the rest of the Capco Boys behind me, I never go up there thinking I’m not going to win no matter what the numbers say. I know we’ve got a car that can win, and we just have to go out and do it.”

Leah Pruett (Top Fuel) and Ron Capps (Funny Car) were the winners of the 2019 event. This year’s race in Brainerd will be televised on FOX Sports 1 and FOX, including live final eliminations coverage starting at 3 p.m. (ET) on Sunday, Aug. 22 on FOX. It is the 12th of 20 races during the 2021 NHRA season and appears in its traditional spot as the penultimate race of the regular season. That puts it at a key point, which would add even more significance if Torrence can capture the victory. 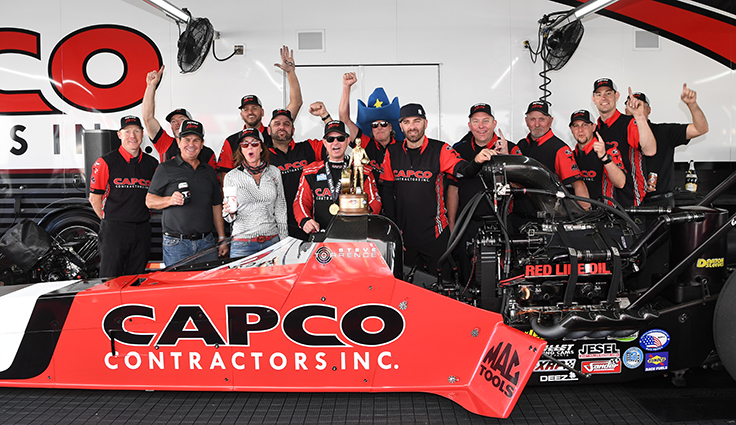 Winning at all the tracks on the NHRA circuit would be another incredible accomplishment for Torrence, who is closing in on 50 career Top Fuel wins. He’s currently at 46 and will be the heavy favorite to claim a fourth straight world title. To get it — as well as a Brainerd win — Torrence will be challenged by a number of top drivers, including Topeka winner Brittany Force, who won in Brainerd in 2016, Torrence’s father, Billy, who won the race in 2018, Pruett, three-time world champ Antron Brown, Mike Salinas, veteran Doug Kalitta, Clay Millican, Justin Ashley, rookie Josh Hart, and Shawn Langdon. But Torrence has found a winning recipe, and he’s going to try to keep following it.

“We’re looking forward to the Countdown,” Torrence said. “It’s always [tough] to have to give up a big lead, but we know we’ve got a race car that’s bad to the bone. We’re not planning on doing anything different the next two weeks, and we’re sure not going to do anything different in the playoffs.”

NHRA Camping World Drag Racing Series qualifying will feature one round at 6 p.m. CT on Friday, Aug. 20 and the final two rounds of qualifying on Saturday, Aug. 21 at 2 and 5:15 p.m. Final eliminations are scheduled for 11 a.m. CT on Sunday, Aug. 22.

To purchase general-admission or reserved seats, call 866-444-4455. Tickets also are available online at www.brainerdraceway.com. Kids 12 and under are free with a paid adult.